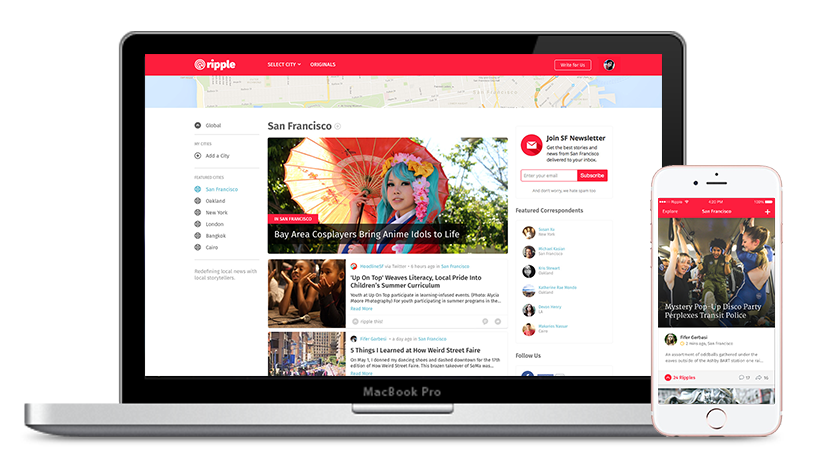 From LocalLabs to GoLocal24 to Everyblock, hyper-local news startups have consistently collided with foreboding economics: Narrow audiences tend to be small audiences, and small audiences are hard to monetize.

But Ripple founder and CEO Razmig Hovaghimian, who previously made splashes with Embrace and Viki, thinks his latest project could build a more successful business model for hyper-local news — and several heavyweight funders are buying in.

"I want [Ripple] to be a platform where storytellers get not only recognition and satisfaction from it, but compensation as well." -Razmig Hovaghimian

The source of enthusiasm for Ripple is two-fold: First, by combining geo-mapping technology with a voting system that allows stories to “ripple out” to a wider audience, Ripple creates an opportunity to produce hyper-local news at scale — a big step toward business viability.

Second, unlike the algorithmic and aggregation-based hyper-local sites that have been largely unsuccessful, Ripple accounts for the importance of on-the-ground community engagement. Most notably, Ripple is powered by human contributors who live in the cities they’re covering, and those contributors do actual reporting rather than web aggregation — an approach that West Seattle Blog and other hyper-local news outlets have shown is crucial.

“By combining location technology and a contributor community, we’re solving the very real problem of discovering relevant local content,” Hovaghimian said in a press release. “We are creating a hub for city news and stories happening right around you, tapping into the pulse of your city.”

Ripple’s innovative blend of technology and community, as well as its early success courting investors, are signals of the app’s commercial promise. But big questions still remain about the quality of Ripple’s original content, the details of its business model and the ethics of its compensation scheme for contributors. Last week, I interviewed Hovaghimian to discuss these questions and to learn more about what’s ahead.

Hovaghimian (second from left) and his team are only the latest media entrepreneurs to tackle hyper-local news.

One core tenet of Ripple’s philosophy is that local stories are best told by local people. “There’s a level of authenticity of hearing from people on the ground,” Hovaghimian said. “I don’t want any correspondents who live in Chicago, but report on Baltimore. It just doesn’t make sense.”

Ripple’s application process helps it weed out non-resident contributors, but Hovaghimian acknowledges that “Pulitzer-winning” credentials aren’t a requirement for selection. Ripple instead embraces citizen journalists of all stripes, and at least for now, the vast majority of those citizen journalists are unpaid. (The exception is a small group of multimedia journalists who are being paid to produce original video content.)

This approach seems likely to amplify diverse community voices that haven’t always found a home in journalism. But what remains unclear is whether Ripple’s corps of unpaid contributors can meet the standards of accuracy, fairness and rigor that consumers generally expect from professional journalists. And if not, will users abandon Ripple, or will they instead decide that what’s gained in authenticity is worth what’s lost in traditional markers of quality.

While Hovaghimian hopes Ripple’s crowdsourced voting system can scuttle that trade-off between authenticity and quality (“The most well-written and newsworthy stories are probably the ones that will index,” he says), it’s uncertain how large of a market exists for content produced by amateurs. Sure, authenticity matters, but consumers also want news to be relevant, timely and smart. That has proven to be challenge even for hyper-local start-ups with paid staff, such as GoLocalPDX. For Ripple’s unpaid contributors, the challenge seems even greater.

Still, other elements of Ripple’s model are extremely promising. For example, in addition to cultivating a network of original contributors, Ripple has partnered with local news outlets to distribute their content through the app. The ability to tag this content by location and to push it out to specific groups of readers could be a huge boon for civic journalism — as well as an attractive feature for local advertisers.

Eventually, Hovaghimian and his team may have to decide whether Ripple can survive as a stand-alone news platform, or whether it should be primarily a distribution and engagement tool for established outlets. But for now, Ripple is straddling both roles, creating a subplot worth following.

If Ripple Makes Money, Who Will Get Paid?

Assuming Ripple stays in the content-production game, its long-term business model remains a question mark. The company’s current income streams — advertising revenue and syndication fees — are pretty conventional, and while Hovaghimian says his team is exploring other opportunities, those are unlikely to materialize until Ripple proves it can build an audience.

What does seem clear is that Ripple’s path to profitability will depend heavily on its supply of free labor, which begs the question: If Ripple does start making money, who will get paid?

To his credit, Hovaghimian is already paying about a dozen multimedia contributors, and he says the long-term plan is to compensate all contributors with a share of Ripple’s advertising and syndication revenue. But the details remain fuzzy.

“Obviously, I want it to be a platform where storytellers get not only recognition and satisfaction from it, but compensation as well,” he said. “It’s going to be a hybrid, but I don’t know what the balance will be.”

If Hovaghimian doesn’t get the balance right, the concern is that Ripple could become the Uber of journalism, with poorly paid local contributors propping up a profitable global enterprise. Sure, that’s still a long ways off, and as noted above, Ripple will find it harder than Uber did to create value with its low-wage contributors (after all, producing great journalism is a much stiffer challenge than driving a car).

But if investors are right about Ripple’s commercial potential, then Hovaghimian shouldn’t be exempt from questions about compensation for contributors. Because if making local news profitable requires devaluing the labor that makes it valuable, then a lot of journalists will have trouble getting on board.