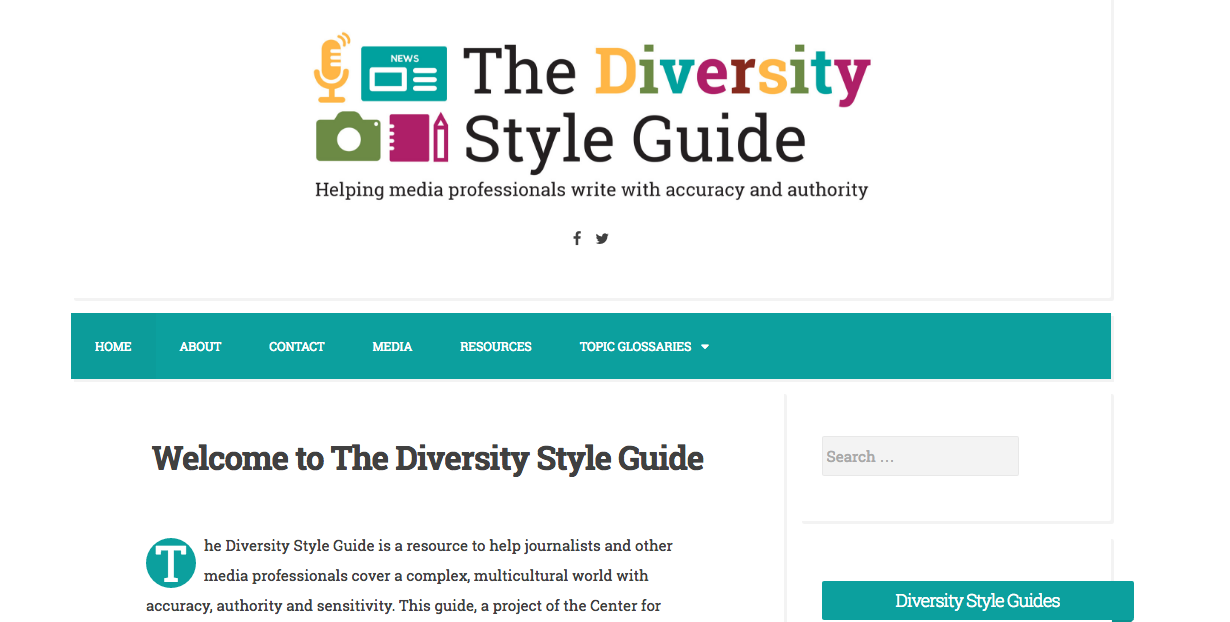 A screenshot of the Diversity Style Guide's home page.

For years, the National Association of Black Journalists, the Asian American Journalists Association, the National Center on Disability and Journalism and about a dozen other organizations have all had separate journalistic style guides scattered across the web.

But thanks to new project led by Rachele Kanigel, associate professor of journalism at San Francisco State University, those resources are now centralized in a single place.

“Someone can send me a message, and within minutes I can have a new definition up.” - Rachele Kanigel

Earlier this month, SFSU’s Center for Integration and Improvement of Journalism launched the Diversity Style Guide, a searchable online database that merges the knowledge of more than 15 existing style guides, allowing journalists to research the appropriate usage of words from abaya to Zionist. In total, the new style guide includes 711 entries — and counting.

“What’s great about the website is I can update it frequently,” Kanigel said. “Just since the style guide launched a few weeks ago, I’ve had requests to add words like gypsy and Roma and Polock and Okies.”

“It’s really great,” Kanigel said. “Someone can send me a message, and within minutes I can have a new definition up.”

The Style Guide in an Age of Anti-Political Correctness

Kanigel’s style guide comes at a time when culturally sensitive language can be seen as a statement in itself. In recent years, “political correctness” has increasingly become a dirty word, allowing offensive phrases such as “illegal alien” to re-enter the journalistic lexicon.

“Sometimes I look up these terms on Google News just to see how they’re being used,” Kanigel said. “I think there’s still a lot of people who need to be educated about them.”

But Kanigel acknowledges that many usage decisions are not black-and-white, meaning journalists will ultimately have to make judgement calls. For example, the use of “they” as a singular, gender-neutral pronoun remains an area of contested usage, with the Washington Post allowing the word even as other news organizations have taken more cautious approaches.

“I think people can use this guide as a place for advice and guidance, but they’ll have make their own decisions about some of these things,” Kanigel said. “I’m hoping the Diversity Style Guide will help them think through these issues and give them the background and context they need to make those decisions.”

On the campaign trail, Donald Trump has tapped into popular backlash against so-called “political correctness.” Photo by Gage Skidmore on Flickr and used here with Creative Commons license.

Kanigel says a common mistake she still sees in journalism is the use of the word “wheelchair-bound,” which many people with disabilities find offensive. “People who use wheelchairs generally feel enabled and empowered by their chairs,” she said. “These devices allow them to get around and get transportation, so you can see how that’s a term that’s not just offensive but inaccurate.”

In the Diversity Style Guide, the entry listed under “wheelchair/wheelchair-bound/confined to a wheelchair” offers journalists advice for navigating these terms:

People who use mobility equipment such as a wheelchair, scooter or cane consider their equipment part of their personal space, according to the United Spinal Association. People who use wheelchairs have widely different disabilities and varying abilities. It is acceptable to describe a person as someone who uses a wheelchair, followed by an explanation of why the equipment is required. Avoid confined to a wheelchair or wheelchair-bound as these terms describe a person only in relationship to a piece of equipment. The terms also are misleading, as wheelchairs can liberate people, allowing them to move about, and they are inaccurate, as people who use wheelchairs are not permanently confined in them, but are transferred [or transfer themselves] to sleep, sit in chairs, drive cars, etc.

The Diversity Style Guide features entries on several other words that are widely misunderstood or misused, including:

Use this word carefully and sparingly. The term is appropriate only in generic phrases that do not refer to specific individuals: concern for the elderly, a home for the elderly, etc. In other words, describing a person as elderly is bad form, although the generalized category elderly might not be offensive. If the intent is to show that an individual’s faculties have deteriorated, the Associated Press Stylebook recommends citing a graphic example and attributing it to someone.

While anyone may wear clothes associated with a different sex, the term cross-dresser is typically used to refer to heterosexual men who occasionally wear clothes, makeup and accessories culturally associated with women. This activity is a form of gender expression, and not done for entertainment purposes. Cross-dressers do not wish to permanently change their sex or live full-time as women. Replaces the term transvestite.

Traditionally a pejorative term, queer has been appropriated by some LGBT people as a self-affirming umbrella term. However, it is not universally accepted even within the LGBT community and should be avoided unless describing someone who self-identifies that way or in a direct quote. When Q is seen at the end of “LGBT,” it typically means queer and/or questioning.

With a few exceptions, the entries in Kanigel’s Diversity Style Guide are sourced, with permission, from existing style guides. If there’s a word or phrase missing, users can let Kanigel know by submitting an online form.