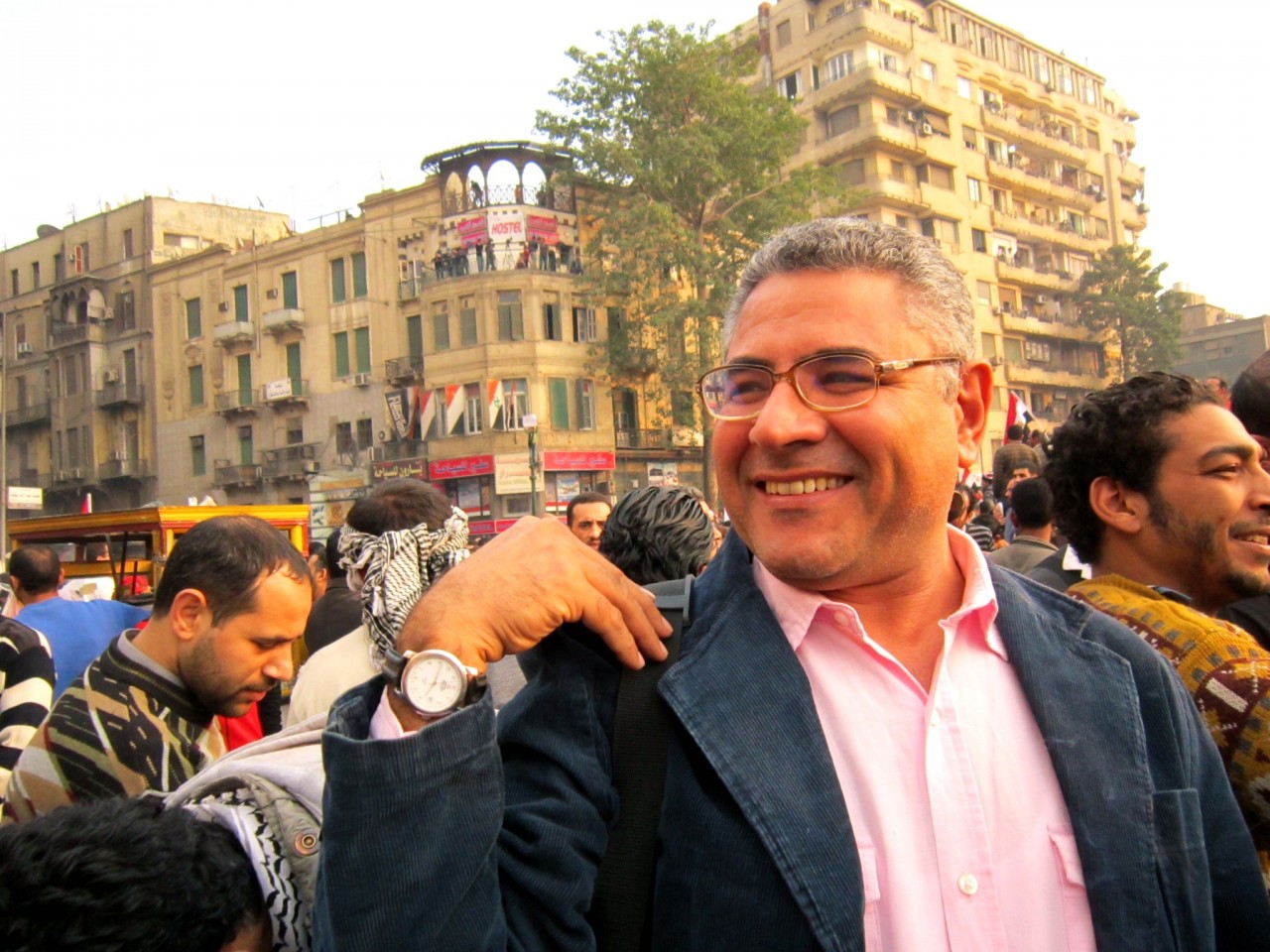 Gamal Eid, pictured here in Tahrir Square, is one of Egypt's most influential defenders of human rights. Photo by Gigi Ibrahim and used here with Creative Commons license.

Two human rights defenders in Egypt are scheduled to appear before Cairo’s criminal court on Monday, May 23 in a case that could have broad implications for journalists and activists throughout the country.

"The Egyptian authorities have moved beyond scaremongering." - Nadim Houry

The court will determine whether or not to freeze the assets of both Hossam Bahgat, founder of the Egyptian Initiative for Personal Rights and Gamal Eid, executive director of the Arabic Network for Human Rights Information and a legal attorney specializing in media freedom. Bahgat and Eid are two of the country’s most influential voices in pushing to uphold rule of law and enforce Egypt’s commitments to international human rights doctrine. Both lead organizations that, despite increasingly difficult circumstances and regulatory efforts undercutting civil society activities, have managed to stay afloat and continue defending journalists and human rights activists both on and offline. Both have been banned from travel outside of Egypt since February 2016.

Although the judiciary has released little information about Monday’s hearing, it has been linked to a 2011 case in which numerous foreign NGOs were prosecuted for receiving and using foreign funds without a license. Neither Bahgat nor Eid were formally charged at that time.

In a statement on the case, Human Rights Watch’s Middle East director Nadim Houry said: “The Egyptian authorities have moved beyond scaremongering and are now rapidly taking concrete steps to shut down the last critical voices in the country’s human rights community.”

The case comes at a time when the need for lawyers like Eid and Baghat seems overwhelming. At least 33 journalists have been detained in Egypt over the past four weeks alone, most of them while attempting to cover political protests. Most, but not all, have since been released. Among those still held are Yanair news website journalists Amr Badr and Mahmoud al-Sakka, who have been committed to 30 days’ detention, and El-Fagr news website photographer Ali Abdeen, who was sentenced two years in jail after being convicted of inciting illegal protests, obstructing traffic, and publishing false news. The Egypt-based Journalists Against Torture Observatory and the Committee to Protect Journalists are following their stories and publishing the most up-to-date information on their cases.

Ethiopian blogger and activist Zelalem Workagegnehu was sentenced by the Federal High Court of Ethiopia to five years and four months in prison following his conviction for “supporting terror” by helping to facilitate a course on digital tools and safety. He was initially charged in October 2014, and has spent over a year in jail. He and co-defendants reported experiencing extensive torture in detention, and were forced to sign confession letters. Zelalem is expected to appeal the decision.

Social Media is Back on in Uganda, Off in Iraq

The blackout on social media in Uganda finally ended on May 15 after a ban “for security reasons” during the days following President Yoweri Museveni’s inauguration ceremony. During the shutdown, only people using VPNs – and the State House of Uganda – were able to circumvent the blackout.

Iraq followed Uganda’s lead in shutting down its Internet, though not for security reasons. The shutdown, which occurred in all regions of the country, coincided with official exams for secondary and high schools, which has led some to believe the blackout was intended to prevent cheating. It lasted for approximately three hours.

Photo by Sean MacEntee on Flickr and reused here with Creative Commons license.

A facial recognition tool called FindFace has become popular in Russia, allowing users to photograph people in a crowd and identify them with 70% reliability by comparing these images to profile pictures on the Russian social network Vkontakte. The software has considerable implications for the invasion of privacy, and has already been used to uncover the social media profiles of female adult film actors in order to harass them. In early April, a young artist named Egor Tsvetkov highlighted how invasive the technology can be, photographing random passengers on the St. Petersburg subway and matching the pictures to the individuals’ Vkontakte pages, using FindFace. “In theory,” Tsvetkov told Global Voices, “this service could be used by a serial killer or a collector trying to hunt down a debtor.” Currently the app’s creators say the technology can work with any photographic database, but it does not work with Facebook.

Chinese censors have turned their sights to video, targeting live-streaming platforms that show unauthorized broadcasts of shows, vulgar language, “inappropriate” clothing, and even eating and posing with bananas in a “provocative” manner.

Eight people were arrested in Iran for posting their photos online. Among them were multiple models who posed with their hair uncovered on Instagram. Mehdi Abutorabi, who managed a publishing tool called Persian Blog, was also detained. Modeling is technically illegal in Iran, and the country’s laws require all women cover their hair.

Kenyan blogger and photographer Msingi Sasis has gone missing after being arrested last year while taking photos of Galleria Mall in Nairobi at night. He was held on “suspicion of terrorism” and then released with no charges. He later reported experiencing loss of his livelihood and emotional and physical turmoil resulting from his arrest.

A Bulgarian environmental activist is facing trial for insulting the head of a copper mining company on Facebook. The case could illustrate the fragility of free expression in the country, according to Global Voices’ Nevena Borisova, as social media may be covered within Bulgaria’s criminal code penalizing defamation or insult.

Mozambique is Spying on its People (Without a Warrant)

The government of Mozambique is extensively spying on its citizens, according to an investigative report by local news oulet @Verdade, listening to their phone calls, reading text messages, email, chat, and monitoring their social media activity and web browsing activities. The monitoring was carried out using a technical system reportedly built by the Chinese technology company ZTE Corporation, and has been managed by military command.

The Intercept released a new batch of documents (originally made public by Edward Snowden) that includes 166 editions of the internal newsletter of the NSA’s Signals Intelligence Directorate, SIDtoday.