Hearing the Roar of Female Empowerment 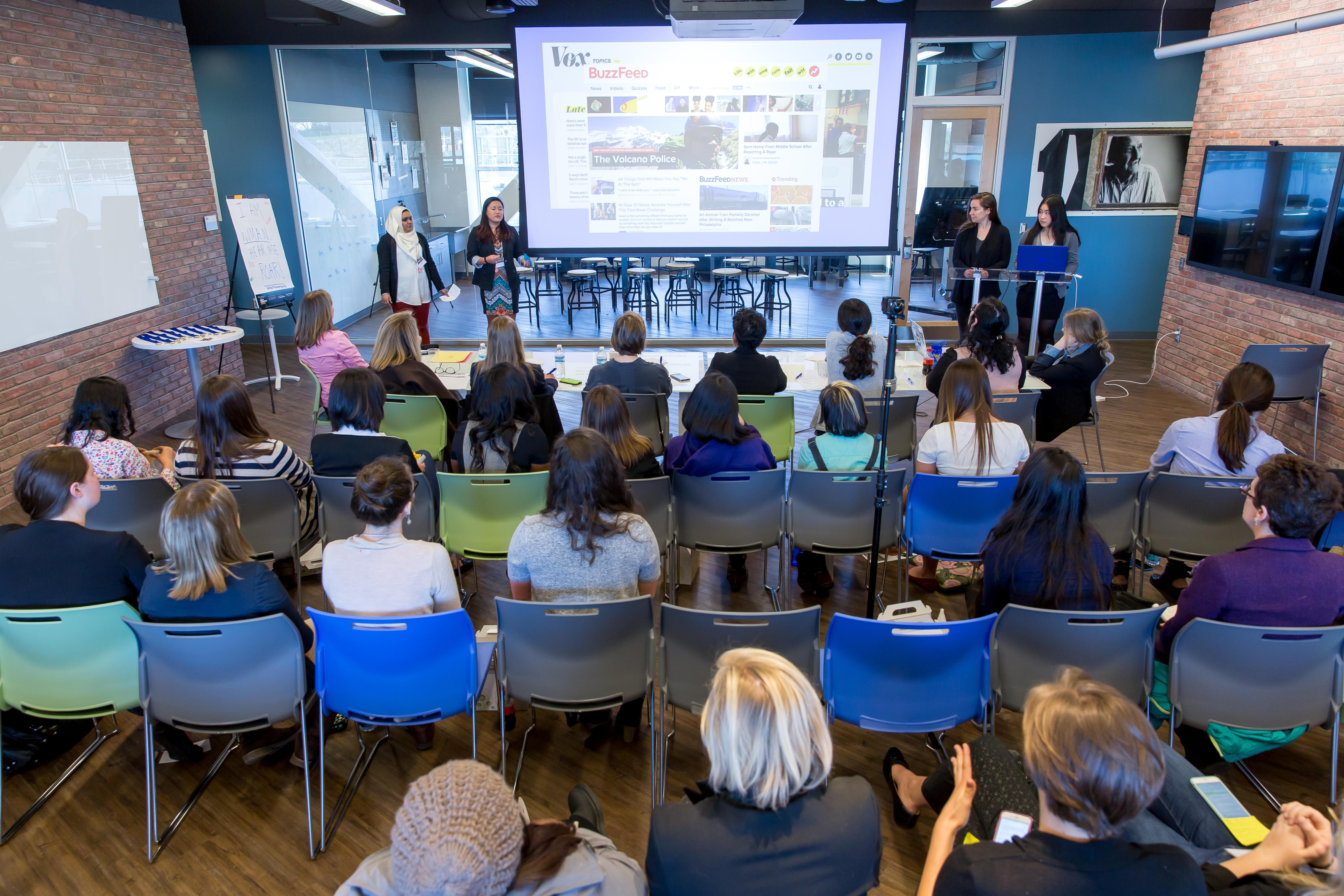 One of the eight teams at the Women's IoT Makeathon at WVU presents its idea to the judges on April 3, 2016. (Photo by David Smith/WVU Reed College of Media)

On day two of the Women’s Internet of Things (IoT) Makeathon at West Virginia University’s new Media Innovation Center, a colorful hand-drawn sign appeared for all to see. Its message was simple – “I AM WOMAN. HEAR ME ROAR!” – but its meaning went much deeper. It showed the instant impact that the event was having on the all-female audience.

The makeathon was the third and final event in the “Hack the Gender Gap” series created by WVU’s Reed College of Media in partnership with MediaShift. It brought together more than 50 college women from WVU, Morgan State, Ohio University, Northwestern, the University of Missouri, Potomac State and Penn State to learn from and engage with female experts on design, IoT, business and public speaking. The students came from multiple disciplines: journalism, strategic communications, business and computer science.

“Being in this environment has … it’s made me realize that I can go out and do this myself if I have an idea." -Trista Thurston

Professional women from such outlets as NPR, the Wall Street Journal and Thomson Reuters served as mentors to the eight student teams that tackled the competitive challenge of creating a media solution using IoT and “smart” objects. In roughly 30 hours, the teams conceived and developed their ideas before giving an Ignite-style presentation to the other teams and an all-female panel of seven judges.

Most of the young women in the room had no experience in IoT or do-it-yourself electronics prior to that weekend in April. But they all approached the challenge with enthusiasm and ambition. They took to heart our charge of becoming makers and creators in an emerging field, and they learned a lot about how to work together and what female empowerment in a male-dominated field can look like.

Key to their understanding of the landscape of IoT was a presentation by Christine Sunu, the GE IoT fellow at Buzzfeed’s Open Lab for Journalism, Technology and the Arts. Sunu implored them to think broadly about ways to “make life more magical” but also offered practical advice on thinking about inputs and outputs of data and how to make data from objects meaningful.

Just as important, Sunu shared her personal story about when she first started learning how to work with electronics. She emphasized that like many women in the room, she studied writing in college. She stressed that the maker world is accessible to anyone and encouraged the audience to be unafraid to play and experiment.

Christine Sunu of BuzzFeed talks about inputs and outputs of IoT during the makeathon at WVU. (Photo by David Smith/WVU Reed College of Media)

For many teams, Sunu’s lunchtime presentation was a pivotal moment in the development of their ideas. That was especially true for the winning team, Team Clothespin, made up of Rebekah Kambara, Eunice Lee, Trista Thurston and Antoinette (Toni) Yelenic.

After discarding several other ideas, the team focused on fixing one problem – the challenge that many young people have in managing their finances.

The team created CARDful, a card placed in the wallet and paired with a mobile app that helps users understand and track their spending habits. It connects to the user’s finances and budget and changes colors based on how the user spends money. The object of the card is to “stay out of the red,” and the media tie-in was accomplished through content partnerships with financial and business publications.

Speaking after their win, team mentor Tanya Ballard Brown of NPR said, “When we came back after lunch, Toni was like, ‘We need to focus on a practical problem. We need to scale back. We’re not going to fix the environment, but we can focus … on a smaller scale issue.’

It took you no time from there to say, ‘How to adult?’ Within the hour, you pretty much had this idea. And then you just fleshed it out.”

Team Clothespin celebrates its win after hearing from the judges. (Photo by David Smith/WVU Reed College of Media)

During the judges’ remarks, Sunu praised the team for CARDful’s simple and clean design, which requires little input from the user.

The ease of use was a big factor in the team’s thinking.

“We wanted to do familiar objects. I think the scariest thing about the Internet of Things is that people have that buzzword and they have that certain connotation. There are things with wires. It looks strange, and it’s not natural. We wanted something that’s going to blend in,” said Thurston, the team’s leader.

By the end of the event, women on all eight of the teams had a chance to have their ideas and voices heard – something that participants said was a highlight of the weekend. Many of them left their mark on the “I AM WOMAN” poster by signing their names.

Student participants left their mark on the sign that appeared during the makeathon at WVU (Photo by Amy L. Kovac-Ashley)

Ballard Brown said that the event’s atmosphere of openness and mutual support reinforced that she needs to seek out younger female colleagues in her newsroom.

“It has taken me some time to get to a point, even as an adult professional … to be able to feel confident about speaking up in meetings. Often, those meetings are not led by women,” she said. “It was certainly for me a good reminder that I need to do some more mentoring with my interns … in terms of making sure that they feel confident and empowered.”

In Their Own Words

After their win, the members of Team Clothespin shared their thoughts about how they approached the challenge and what it was like to work in an environment filled with other women. (Unfortunately, Lee had to leave early for a flight back home, so she wasn’t able to be part of the group interview.)

What were your expectations coming into the makeathon?

“I’m a giant nerd. I love technology. I love consumer technology, so just getting into a space of like-minded women has been incredibly invaluable.” – Trista Thurston

“I had no idea what this was, but I’m so glad I came here because it was such an amazing experience.” – Rebekah Kambara

“Technology isn’t necessarily my forte. Coming into it not knowing what to expect kind of freaked me out a little bit. But I was like, ‘I’m just going to do it and get out of my comfort zone.’” – Antoinette Yelenic

How did you get to your idea?

“We were gravitating toward things that we thought we were interested and passionate about, but then when it got past the point of brainstorming, we were all kind of at a disconnect. So we started over two or three times.” – Antoinette Yelenic

“We wanted something that was already in someone’s habits. We didn’t want to make people do something that they’re already not doing. Because if you’re going to make them change their habits, they are probably not going to do it. It’s not going to stick. … If it just works and you don’t have to think about it, that’s magical to me.” – Trista Thurston

“I did the ice breaker from the get-go. … I’m really glad we did that. I’m also glad that we weren’t afraid of conflict and disagreeing.’” – Trista Thurston

“I think the best part was the group, honestly.” – Rebekah Kambara

“Trista was the team leader, but I like that the leadership changed among you depending on what was happening.” – Tanya Ballard Brown

How did this event affect that way you think about women in media and technology?

“[There were] all these other women who care and are passionate and are determined, and that was awesome for me to be around because I just feel like everyone was empowering each other.” – Antoinette Yelenic

“Being in this environment has … it’s made me realize that I can go out and do this myself if I have an idea. I’m super personally interested in this field and in technology, and I feel so passionately about it.” – Trista Thurston

Amy L. Kovac-Ashley is the managing director of the Media Innovation Center at West Virginia University’s Reed College of Media and a visiting assistant professor at the college. Previously, she was the assistant dean for Georgetown University’s master’s in journalism program. Before coming into academia, she was a professional journalist for more than a decade, where she worked on a number of local entrepreneurial websites at Patch, The Washington Post and The Roanoke Times.