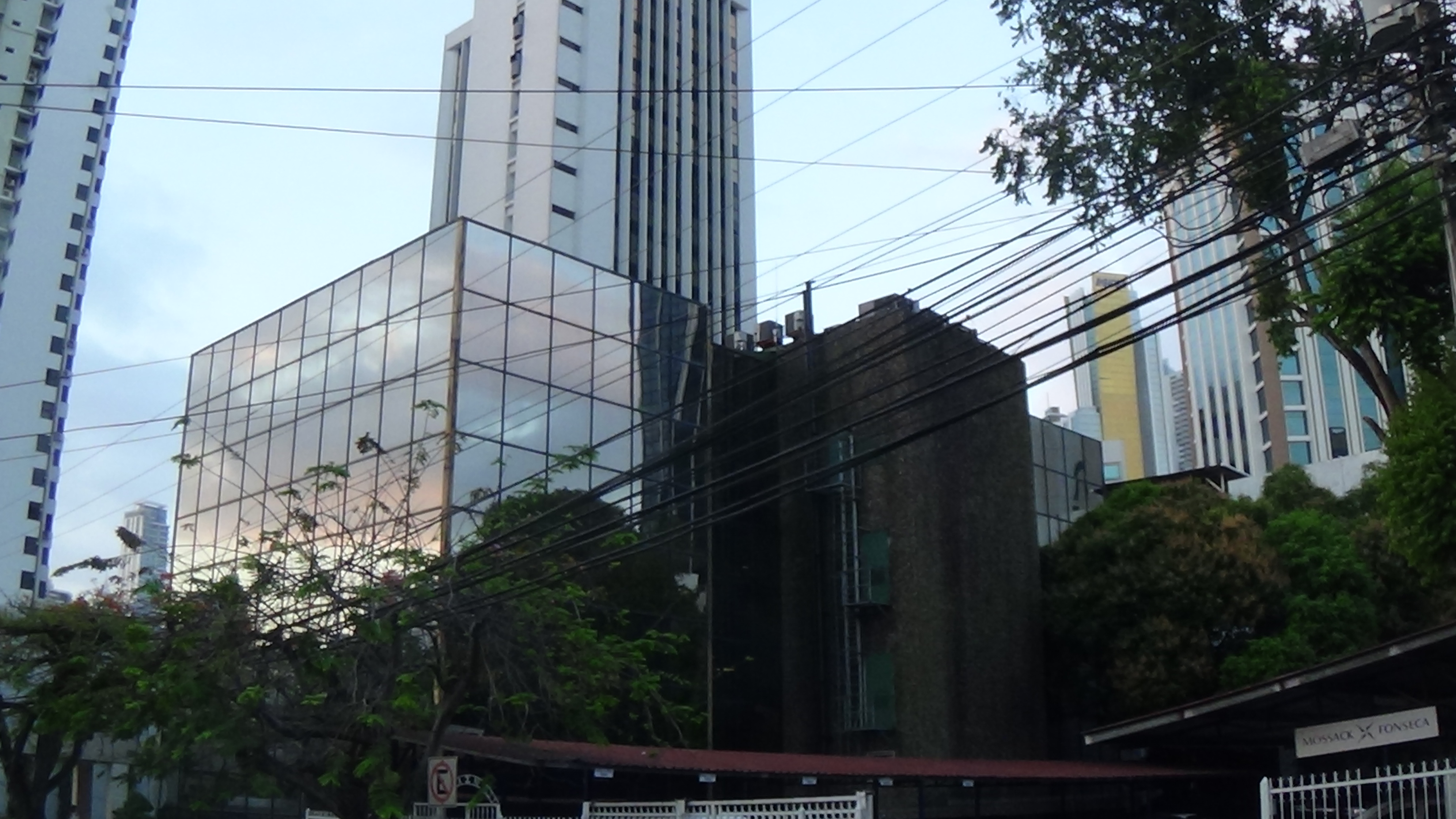 The headquarters of Mossack Fonseca, the firm at the heart of the Panama Papers. (Valenciano/Creative Commons)

Facebook changes its algorithm again, this time highlighting stories you might spend time reading. Video creators are gaining power and money from social networks and publishers. And Comcast adds more pay TV subscribers, while buying DreamWorks Animation for $3.8 billion. Our Metric of the Week is “page load time,” and Mark rants & raves about messaging bots. Plus, we’ll hear from the International Consortium of Investigative Journalists’ Marina Walker Guevara to learn more about the Panama Papers.

"We don't see [ICIJ] as the primary publisher. We see ourselves as a partner and a publisher but we greatly rely on media organizations around the world." -Marina Walker Guevara

Marina Walker Guevara is deputy director of the International Consortium of Investigative Journalists, an independent network of reporters. Recently, she co-managed the “Panama Papers” investigation, one of the biggest leaks in journalistic history, which involved more than 370 reporters in 76 countries. Her stories have appeared in several international media including The Washington Post, The Miami Herald, Le Monde and the BBC.

Facebook Changes Its Algorithm to Highlight Stories You Want to Read

Publishers depend on Facebook to highlight their stories in the News Feed, while Facebook depends on high-quality content to keep its users happy. Facebook seems to have the upper hand when it comes to changing its infamous algorithm, making publishers scurry to change their ways. But in this case, Facebook made a change to boost quality stories that people will spend time reading. In other words, a story that’s not necessarily longer, but one that keeps someone engaged. Engagement metrics are all the rage, and now Facebook is on board with pushing engaging content. Plus, they won’t be showing you post after post after post from just one publisher who’s spitting out a lot of content.

Unlike with previous algorithm changes, this one actually had publishers like the Washington Post and Slate singing its praises. Slate’s editor-in-chief Julia Turner told Digiday that, “We believe in prioritizing editorial quality and audience engagement and loyalty over the pursuit of sheer scale, and I’m glad Facebook has tweaked the algorithm.” Still, as Fortune’s Mathew Ingram points out, it’s hard to say which kind of journalism this tweak will benefit. One thing is for sure, though: Facebook is continuing to battle against clickbait and stories that lead you down a dead end. And that’s a good thing.

Call it the second coming of digital video, but lately it seems like it’s the hottest space for both publishers and social networks. If you’re a regular listener to our podcast, you know that this has been on the horizon for a while. Twitter, Facebook and Snapchat all have their own forms of online video, whether it’s live or pre-taped. Many top publishers like BuzzFeed and Mashable have been moving faster toward video. Last December, Vine video stars visited Twitter headquarters demanding to get paid so they could make a living on the social network, according to BuzzFeed’s Alex Kantrowitz. And Facebook has been paying top video producers and celebrities six figures to produce regular segments on Facebook Live.

Of course, this massive push into video means that mistakes will be made, and that plain old text stories will be devalued once again. BuzzFeed Motion Pictures has been signing its video stars to two-year deals, but it also got into trouble with a video called 27 Questions Black People Have For Black People, which was mocked mercilessly on social media. BuzzFeed eventually had to make an apology. Gawker’s Jordan Sargent wonders, “Who will protect the written word? The answer, ultimately, is probably no one.” For a long time, video creators complained about YouTube not giving them a good enough deal on revenues. But now, with so many video outlets from Vine to Facebook Live to BuzzFeed, it seems like the creators are gaining control.

It looks like they can turn the tanker ship around after all. With so many media companies taking a beating from cable cord-cutters or cord-nevers, cable giant Comcast showed continuing strength by adding 53,000 pay TV subscribers in the first quarter. And that’s after adding 89,000 in the fourth quarter of last year. How did they do it? They actually put money into customer service — imagine that! $300 million to be precise — finally listening to customer complaints of poor service for years. They also upgraded the cable box to the Internet-connected X1 and most crucially started offering “skinny bundles,” cheaper packages with less channels and on-demand viewing. However, buried in the earnings report was the note that Comcast’s own NBC Universal channels actually lost cable subscribers from all providers, but made up the difference by charging more in carriage fees. But that’s really not sustainable.

Meanwhile, Comcast said it would buy DreamWorks Animation for about $3.8 billion. The move will help Comcast’s film division which saw profits drop by 43 percent last year. It will also give the company more reach in China, where Dreamworks has a joint studio with local media companies. As Motley Fool’s Rick Munarriz points out, Comcast really wants to become Disney after failing to buy Disney 12 years ago. It already has a theme parks business with Universal Studios, which has been booming thanks to the Harry Potter rides, and Dreamworks would give it even more content for theme parks and beyond. In the end, the biggest news from Comcast isn’t a one-time blip toward more pay-TV subscribers; it’s the move to get more content to fill its pipes.

“An Open Letter to Bots”

I know you probably have a bit of an inferiority complex, as messaging bots only come in text messages, leaving you without the body, face or voice of your cousins, the robots. But let’s face it, you are going to take over everything.

Most of us first got to know you online as the bizarre pop-up bots with cartoon heads, usually with telephone headsets on, who wanted to help us make a purchase on an e-commerce site. “Hello, I’m Ted, your automated assistant! Can I help you find an auto part?” But then, as now, you didn’t have a voice. Just a friendly text message, complete with exclamation points. Lots of exclamation points.

Later, you bots started invading the popular Slack messaging service at workplaces, typically tech workplaces. This time, you offered helpful links to company data such as metrics from Google Analytics, or even ways to poll employee sentiment. And who doesn’t love SwearJar, which turns our four-letter words into donations to charity. But of course, it wasn’t long before there was also a bot for playing Werewolf or getting Chuck Norris facts. For shame.

While I have studiously avoided getting drawn into the Slack rabbit hole, despite there being a MediaShift Slack channel and who knows how many others related to media and tech, now comes news that you bots are coming to Facebook Messenger. That’s a place reserved for the most intimate conversations, where family members are trying to find the right time for brunch, or I’m spamming out invites for MediaShift events, or someone from my childhood wants to play whiffle ball. How dare you, bots, come between me and my potential nostalgic whiffle ball games (that never happened)!

First, I’ll come to a place of acceptance with you. I do realize that bots have always had a place in our business relationships, from the automated voice-response phone systems through to Siri and Alexa and now messaging bots. I might not like the dehumanizing idea of you, but I will grudgingly accept that you could save time, money and headaches — for businesses.

But if you’re going to insinuate yourselves everywhere, like a bad “Minions” movie come to life, let’s set a few ground rules.

Save us time. Please. If ordering pizza takes 58 keystrokes instead of just calling someone on the phone (a human, no less!), then why bother? Early tests of the “M” bot on Facebook Messaging only promised replies within an hour. Or the Wall Street Journal bot took 4 minutes to reply to Nick Statt at The Verge. How is that helpful?

We only want to be bothered if it’s important. Breaking news is NOT that the CNN Town Hall is 1 hour and 45 minutes from starting. We don’t need a notification that the bot is ready to be updated. Please don’t interrupt us for a 10% sale on sunglasses. Get to know us a little better, mind your manners, and don’t default to notifying us about EVERYTHING!

Give us just enough personality. This one is tough, we know. We don’t want you going on racist rants like Microsoft’s Tay Bot. But we also want more than just rote answers to rote questions. Give us a little snarky repartée. Be friendly, but don’t overdo it with emoticons (I’m looking at you, Quartz News app). Make us want to wake up to you, but not so much that we get a Her-like crush on you.

In summation, dear bots, we welcome your artificial intelligence, as it should surpass the typical lack of intelligence we get from most customer service calls. But let’s move past Version 1.0 with all its slowness, dullness and distractions. Help us to help ourselves and we will welcome your revolution.