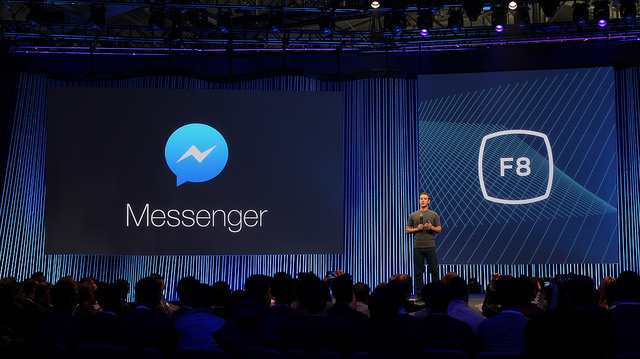 In the news this week, Facebook unveils new chat bots, live-streaming for all, and a 360-degree camera at its F8 developer conference. Plus, Yahoo’s fire sale continues, with various buyers, including Verizon and the Daily Mail, kicking the tires. And the Financial Times reports that BuzzFeed missed its revenue projections by tens of millions of dollars. Our Metric of the Week is dashboards, and Mark rants about Facebook. We’ll also speak with Everette Dennis, dean of Northwestern University in Qatar, to discuss their Mideast Media Study.

"I think there's a slow and quiet trajectory toward greater freedom of expression and I think, in a way, it's a consequence of the digital age." - Everette Dennis on attitudes on free press in the Middle East

Everette Dennis has served as Dean and CEO of Northwestern University in Qatar since June 2011. His last book, “Other Voices: The New Journalism in America,” examined the figures that helped create the “new media” environment of the 1970s.

Facebook pushes into the future with bots, drones and a 360-degree camera

This wasn’t just a developers conference. Facebook F8 included an expansive keynote from tech icon Mark Zuckerberg that included a road map for the next 10 years. We never know which of these will work and which will bomb, but the roadmap included Messenger bots, Facebook Live streaming from drones, a new 360-degree video camera that looked like a spaceship, and Instant Articles for all publishers. That’s a lot. For now, the most imminent push is for Facebook Live streaming video, something that was only open to journalists and celebs before this week. Facebook even ended up paying some media companies, including BuzzFeed, to produce special streaming events. And BuzzFeed didn’t disappoint with two staffers putting rubber bands around a watermelon until it burst into pieces.

And now Facebook Live’s API is opening up so that developers can enable live-streaming from any camera, including those on drones. As for chat bots, Facebook wants to turn its Messenger app into a profit center as well, with companies testing out automated bots that can help people find products or news. Zuckerberg tested out ordering flowers from 1-800-Flowers through a bot, as well as a CNN bot giving headlines. While Facebook says it’s going to be careful before sending people notifications from sponsored bots, the potential is there for more e-commerce and advertising within a messaging service that has 900 million users and counting. The bottom line is that Facebook is not standing still, it’s pushing into every conceivable new technology from VR to artificial intelligence, and publishers will need to weigh just how much of this vision will include them or not.

Buyers continue to kick the tires on Yahoo

Things aren’t looking too good for Marissa Mayer. According to CNN Money’s David Goldman, the CEO of Yahoo is “probably toast.” The company is looking to sell off its search, mail service and content divisions and has extended the deadline for first-round bids to next Monday, April 18. This will give more time to bidders such as Verizon, Google, private equity firms and even The Daily Mail to dive deep into Yahoo’s disclosure documents. According to Re/code’s Kara Swisher, these documents show that Yahoo’s financial situation “is becoming increasingly dire.” Whoever the eventual buyer may be, the sale will likely lead to even more job cuts at Yahoo. Analyst Robert Peck, who believes Verizon is a top contender to buy the company, thinks it could cut up to 40% of the workforce.

So where did Yahoo go wrong? An easier question might be what actually worked. While many potential saviors have tried to turn around the tech giant, it has always come to new technologies a bit too late compared to its competitors. Re/code’s Swisher reported that Yahoo was working on a new voice assistant that would take on Apple’s Siri and Amazon’s Alexa — but there were no details on how much the effort cost or who was working on it. Swisher said that anyone making a bid would be essentially flying blind because the books were so opaque. One potential buyer explained why there were still so many interested parties. “It’s like a dilapidated house in Silicon Valley — you walk in and are overwhelmed with the work that needs to be done,” but then again “it’s in a good neighborhood… so you have to hope you can fix it.” This one is quite the fixer-upper.

The digital media darling finally hits a bump in the road — a very large revenue-related bump. That’s according to inside sources at both Digiday and the Financial Times. The FT’s Matthew Garrahan and Henry Mance reported that BuzzFeed’s revenue target was $250 million for 2015, but it brought in just $170 million. Plus, the company scaled back its target for this year from $500 million down to $250 million. BuzzFeed chairman Ken Lerer disputed the report from the FT, but wouldn’t talk about last year’s numbers. He said that the startup exceeded its goal for the first quarter of this year and is on pace to exceed projections for the rest of the year. But what were those projections? The question remains: What went wrong for BuzzFeed last year?

The culprit could be two things: difficulties trying to scale native advertising and moving heavily into video and TV. If all is hunky dory at BuzzFeed with distributed content online, then why such a big interest in movies and TV? Founder Jonah Peretti still believes in smartphones as the future of digital entertainment, according to the FT, but he’s obviously placing his bets in more places, especially with NBC Universal taking such a huge stake in BuzzFeed. And what about the company’s native ad-centric business model? It’s great that they pushed so hard into native ads, but the reality is that they’re a lot more difficult to scale than running banner ads or even video ads. It takes a lot of work to get them right, to optimize them, and to make sure they spread far and wide. Could this be the start of unicorpses in media, with $1 billion media startups dying off? Probably not with all their money in the bank, but we can definitely expect a correction, one that could result in more layoffs and a lot of introspection.

Facebook recently had its F8 developer conference, but it went way beyond developers. This one had major relevance to news publishers, with Instant Articles opening widely to everyone, a bot platform for Messenger, Facebook bookmarks to read stories later, and a wider release of Facebook Live, the live video-streaming feature.

I already talked about F8 and Zuckerberg’s keynote earlier in the podcast, but more importantly, it’s time to rethink publishers’ relationships with Facebook, and with social platforms in general. There’s a lot of rhetoric out there, distrust and outright anger toward Facebook. “These guys want our content for nothing.” “They don’t care about our business.” “They want to extend their control over everything.”

And it’s hard to argue with some of those comments, especially after Zuckerberg talks glowingly about drones, bots and lasers! He is our once and future overlord! But in all seriousness, publishers need to take a sober look at what Facebook is offering, what Facebook is, and what Facebook is not.

Facebook is at most a neutral party to the media industry, to journalism, to the furthering of our digital age. It wants to speed up news stories, on Facebook. It wants to offer up chat bots, on Messenger. It wants to extend Internet access to everyone around the globe, on Facebook. All of its wonderful ideas, wonderful service to humanity goes directly to its bottom line. If Facebook wants to bring on partners, or pay media companies to use its Live video-streaming, that has nothing to do with helping those partners, and everything to do with helping Facebook.

Not that there’s anything wrong with that. Facebook is a publicly traded company worth billions and it will fight tooth and nail to stay relevant, even if people are now sharing less on the social network, even if other technologies might pass it by. Why does Facebook care about virtual reality, augmented reality and every cutting edge technology it can find? Because it has to place bets to make sure it has a future.

So then why cooperate with Facebook? Aren’t they just a leech on the media business, taking their cut while also siphoning off attention from the websites and apps of publishers? No, they’re not really. It’s better to think of Facebook not as a company, and not as a partner, but as a digital platform. One that is relatively new and evolving. News on Facebook is no different than news in a print newspaper, or news on radio, or news on TV or any other medium.

Ah, but you might say those media are regulated by the government to make sure no one controls the pipes like Facebook does. True enough, but the FCC is taking a much sharper look at what’s happening online, especially when it comes to advertising, sponsored content and transparency. So it’s always possible the Feds could crack down if Facebook pushes too hard.

Media publishers need to be on Facebook, need to try Facebook Live, virtual reality, augmented reality and everything else because they too need to stay relevant, and should be where their audience is and will be. But they also need to stay just one step removed from Facebook, one foot in the door and the other ready to flee if things go south. It’s the same feeling people get when their photos or blogs or data are hosted by a company that could out of business. What happened to my stuff? Where did it go? How can I get it?

The digital age is an age of fleeting relevance. What was exciting and new becomes stale and irrelevant in just a few years or months. Friendster. Myspace. Meerkat, anyone? It pays to spread your social love on multiple platforms, play the field a little bit so you’re not beholden to just one platform. Look what happened to gaming companies like Zynga that depended too heavily on Facebook. Hopefully that won’t happen again.

So in the end, Facebook is neither friend nor foe; it’s really a neutral entity for publishers. That’s a boring headline, which won’t bring a whole lotta clicks, but it’s the reality of the situation. Facebook has a billion plus people on its platform, so it makes sense to be there. But just how much you do, and how much you get out of it, depends on your resources, your tolerance for risk and your willingness to play by Facebook’s rules.