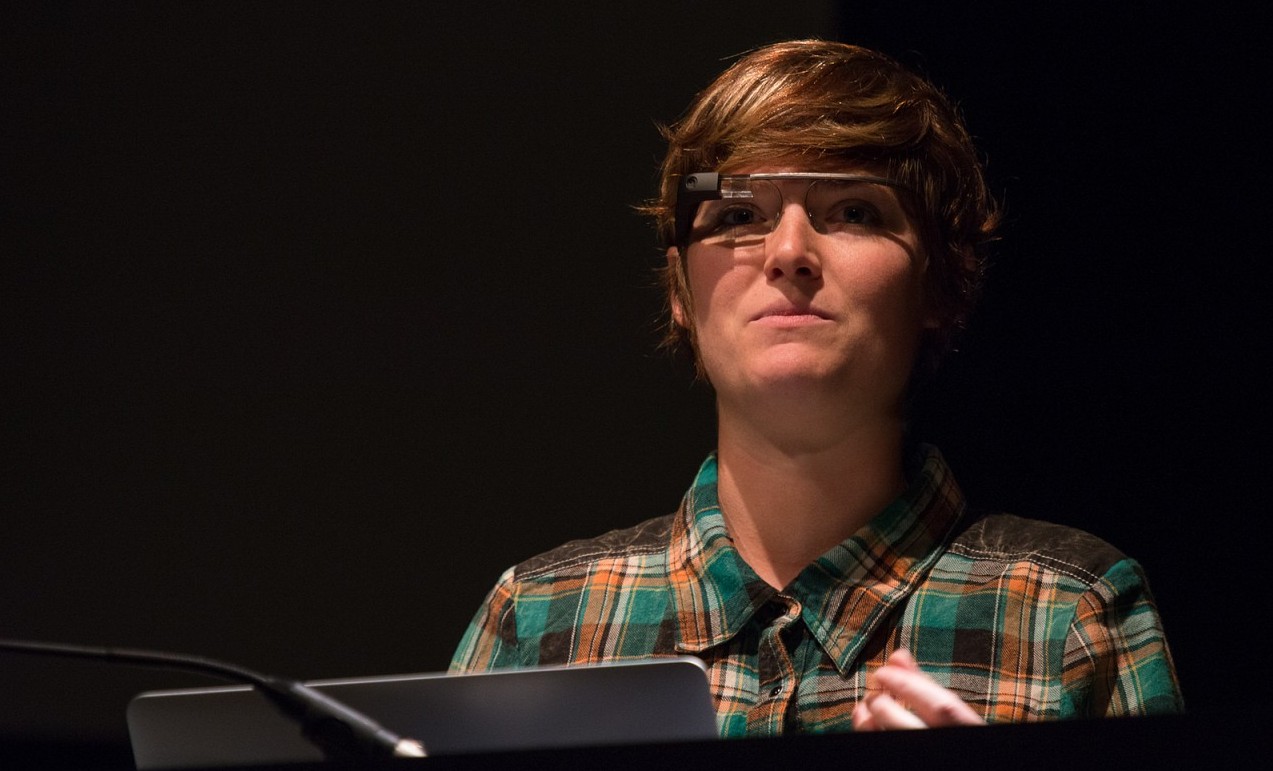 Cyborg anthropologist Amber Case gives a presentation at the dConstruct conference in 2013. Photo by happy.apple on Flickr and used here with Creative Commons license.

As a cyborg anthropologist, Amber Case studies how people interact with the “smart” devices that now fill our world. And she’s puzzled by the direction we’re going.

“We’re in this era of interruptive technology,” she said during a presentation at last week’s What is Media? conference in Portland, Oregon. “We thought that with technology and automation we would have more time in our day and more freedom, but instead the difference between work and play is blurring. When we’re at home, we’re answering email, and when we’re at work we’re doing something silly like playing on Facebook… It’s an issue because we don’t have reflection time. We don’t have down time.”

“We don’t need this era of interruptive technology. We need a calm technology.” - Amber Case

Case is the author of “An Illustrated Dictionary of Cyborg Anthropology” and “Calm Technology,” and her 2010 TED Talk titled “We Are All Cyborgs Now” has been viewed more than 1.3 million times. Speaking at the What is Media? conference on Saturday, Case pointed to the need for technology that fixes real problems, rather than introducing a layer of notifications and buzzes and beeps intended to fix problems that never existed.

“When you open your iPhone now, you just get inundated with all these things you don’t need,” she said. “We don’t need this era of interruptive technology. We need a calm technology.”

Last week, Case and I sat down to discuss the importance of calm technology in media, and the challenges it faces in a world that’s speeding up — not slowing down.

Photo by TEDxBend on Flickr and used here with Creative Commons license.

Amber Case: Calm news delivery is getting the Wall Street Journal on your doorstep in the morning. It’s waking up and not looking at your phone, getting some coffee, hanging out on your couch, and choosing what page to read. It’s relaxing to read that way, and when you get down to the bottom of an article, it doesn’t say ‘read me, read me, read me.’ It doesn’t say, ‘here’s a weird old trick for getting rid of cellulite.’

But do you think the market is going to reward calm technology? Because it seems like people are opting in to all the bells and whistles that come with digital news.

Case: Last year, more people bought physical books than digital books because they miss the feeling of a physical book, and it’s more enjoyable to read. Over time you might have these temporary bumps, like Angry Birds or whatever, but those are trends. What in history tried to engage your attention in a really annoying way that now you remember liking?

It seems like there’s some movement toward calm news with the New York Times and its newsletters. Instead of being deluged with news all day, you can get the morning and evening briefings.

Case: I like the briefings. They’ve caused me to stop looking at the app all day. Now I read it in the morning, and I read it at night, and I think that’s important. Otherwise, people are clicking the button all the time, hoping they might get an email and a dopamine hit–how exciting! It’s the impossible endless feast, which is really bad for you. It splits your attention constantly, so you can never get a thought finished. When you have the experience of looking at the news in the morning and the evening, you’re getting trained to set aside time to relax and enjoy it.

Case: Yeah, I think it was Germany. After 5:00 or 6:00 p.m., it’s OK if no one gets back to you. Honestly, I think it’s wonderful. (Editor’s note: In France, the e-mail restriction exists, but applies to a relatively small class of workers. In Germany, the labor minister considered a similar policy, but it hasn’t become law.)

But that seems a long way off here in the U.S.

Case: Yeah, but I think it’s really important to think about things that way. Humans can’t always be on. When my phone starts to run out of battery, I know I’m tired and I go to sleep. Because if I use my phone a lot, that’s a lot of news and information coming into my head, so I’m probably going to be more tired. I think we need to not push ourselves too far, and we need to restrain our speed just a little bit. Making sure everybody goes really fast, especially in tech, promotes ageism — and that’s really bad. Guys are getting plastic surgery in Silicon Valley to look younger because they’re being discriminated against if they’re above 30.

Case: I’ve found that older, wiser people not only write things down on paper, but they also have these slower moments when they turn off a bit and try to understand things. It’s not that they’re just slower and inefficient. It’s that the slowness allows them to expand on work in a new way. It’s like the equivalent of a glacier versus a river. A glacier might move ridiculously slowly, but in 50 years it will have moved a bit and created a u-shaped valley. The alternative is that you could be a random river that’s forced into all these different places and eventually dissipates in the forest and doesn’t make anything at all. Which would somebody rather be?

Here is Case speaking at TEDWomen in 2010.