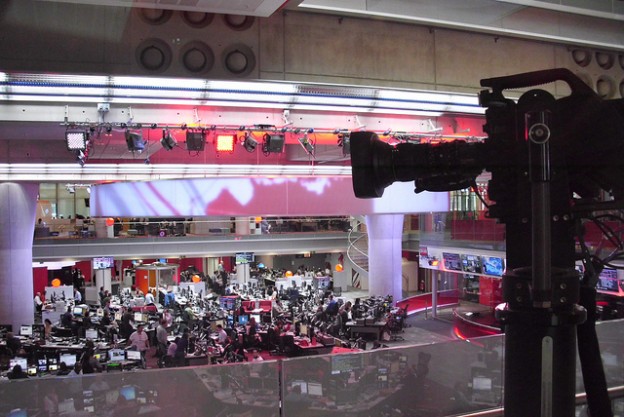 A study published in Journalism and Mass Communication Quarterly examines how one American newsroom is responding to three different types of change. Photo by Flickr user just1snap and reused here with Creative Commons license.

As media entrepreneurs continue to develop new ways to tell stories, communicate information and engage the public, it’s worth considering what the future might look like for such innovations. Will they remain part of an exciting, but narrow, subculture of early adopters? Or will they be implemented more broadly across the industry? And if the goal is the latter, what can reform-minded leaders do to improve the chances that innovation will be embraced — rather than rejected — by their particular newsrooms?

I discussed these questions with Brian Ekdale, assistant professor at the University of Iowa, whose recent article in Journalism and Mass Communication offers a fascinating glimpse into the experience of a mid-sized Midwestern newspaper (which is left unnamed, per academic protocol).

"There's a lot of discussion about change in the news industry, but what’s really going on is a series of different changes." - Brian Ekdale

In the study, Ekdale and his co-authors find that the newspaper’s reporters have mostly embraced technological innovations. For example, 97 percent of respondents said they enjoy learning new technologies, 87 percent agreed that a “digital-first” news strategy is the right way to go, and 80 percent agreed that social media platforms, such as Facebook and Twitter, are important tools in their work.

But the study also found that journalists responded less favorably to relational changes, such as increased collaboration with community members, and even more tepidly to cultural changes that challenge perceptions of “what journalism is and how it is — or ought to be — done.”

“There’s a lot of discussion about change in the news industry, but what’s really going on is a series of different changes,” Ekdale said. “We were trying to parse out some of those differences.”

The acceptance of technological innovation, especially of a digital-first news strategy, marks a big milestone for the legacy media. During early newsroom convergence efforts, digital-first publishing had been “derided as ‘scooping ourselves,'” according the study. But that attitude appears to be dissipating. As one reporter wrote in their response: “‘If you’re clinging to your print work schedule and not blogging, why do you have a job here?'”

Another respondent, described as a “veteran reporter,” put it this way: “The old idea that you held onto [news] until it landed on somebody’s doorstep in the morning doesn’t work anymore.”

But even as journalists embrace new technologies and digital-era platforms, they’re also expressing concern about how these innovations fit into their daily routines. According to the study, only 40 percent of respondents agreed that they have time to keep up with the new social media options, and less than half agreed that the company has given them the training to keep up with new social media options.

“There’s certainly an openness to the technological change,” Ekdale said, “but the realistic response is that it’s more work. And more work is stressful, particularly for those who didn’t grow up with these technologies or tools.”

Mixed Views on ‘Collaboration’ with Community

In the study, questions about “relational” changes in journalism revealed that most reporters welcome public input, even as they balk at the idea of co-production and so-called “citizen journalism.”

Ekdale and his co-authors found that nearly 83 percent of respondents believe that social media helps them get important information to and from the community, and about 75 percent agree that members of the community should have input into coverage decisions.

However, this support for collaboration breaks down when it comes to forms of deeper engagement, such as user-generated content. Only 14 percent of respondents, for example, agree that members of the community should be part of the news team.

As one respondent wrote: “I think the whole focus on bringing people from the community and assuming they can do journalism is not well regarded among the reporting ranks. It’s one thing to have sources and people that you get feedback from, but just because you’re a teacher doesn’t mean you can be an education reporter necessarily.”

This response and others perhaps reflect a narrow view of how co-production can work in the newsroom. For example, projects like WBEZ’s “Curious City” and The Guardian’s “The Counted” have built citizen reporting into the newsgathering process without relinquishing editorial control — a hybrid approach that once-skeptical journalists might support.

But this study indicates that user-generated content, as a concept, faces resistance from journalists who doubt its value and quality.

“There was an attitude that ‘Sure, we can have people write some stories about what’s happening in their community,'” Ekdale said. “But the journalists wanted to relegate that to the softer side of news. There was still a lack of trust for allowing community members to tackle civic issues or breaking news, which journalists didn’t think that community members would have the training or skill set or fairness to take on.”

In addition to encouraging technological and relational changes, the newspaper’s CEO also attempted to spark a cultural shift — one in which journalists would come to see themselves as facilitators of civic engagement and community engagement, rather than strictly as transmitters of daily news.

But while most of the newsroom appeared willing to embrace these principles in theory (67 percent of respondents agreed that a journalist’s job includes fostering community engagement in civic matters), Ekdale says that interviews revealed deep concern and confusion about how to implement the principles in practice.

“People talked about how the CEO would operate at 10,000 feet,” Ekdale said. “The vision statement, to a certain extent, was very idealistic, and people didn’t really know what it meant.”

The broader cultural changes also faced resistance from journalists who held a more traditional view of their role in the community. As one interviewee explained her perspective: “As a journalist, you are supposed to stand back and report on what’s happening, not create it.”

For newsroom leaders looking to improve their success in culture-building, Ekdale offered two insights from his team’s research: It’s important to communicate clear expectations to the newsroom, and it’s critical to create an environment where experimentation and risk-taking are encouraged.

“Sometimes people in the C-suite communicate in a language that makes sense to them, but it doesn’t necessarily make sense to the on-the-ground workers,” Ekdale said. “And for journalists who are working in an increasingly precarious industry, the risks are pretty high if they feel like they’re going to go out on a limb. The journalists [in this study] didn’t necessarily feel they had the freedom to fail.”