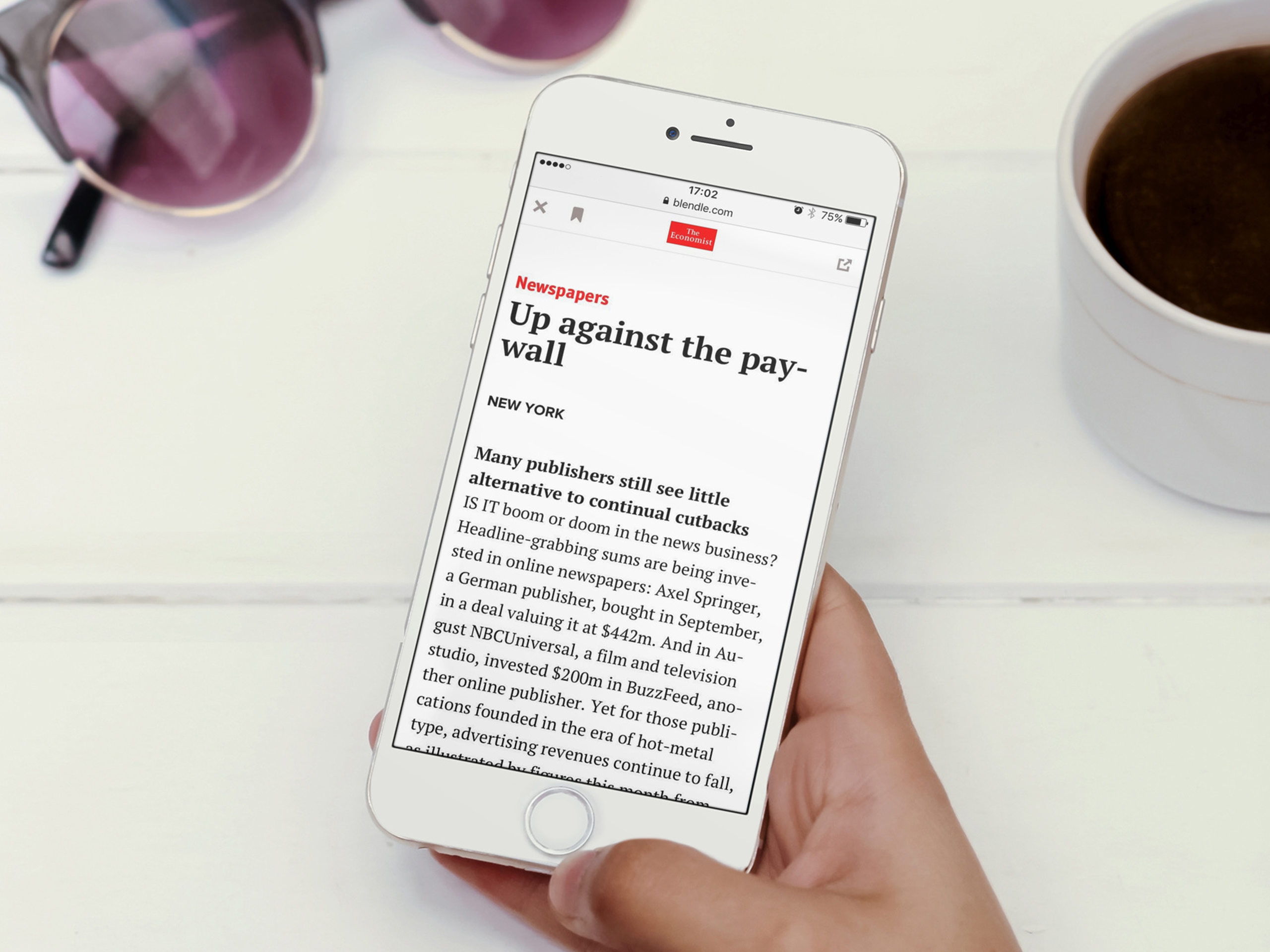 On this week’s show, we’ll discuss AT&T’s plans to launch a streaming-only version of DirecTV. Also, Facebook co-founder Chris Hughes sells The New Republic to Old Money, and Snapchat makes a deal with Nielsen for third-party ad metrics. Mark raves about the “Spotlight” win at the Academy Awards and what it means for the future of newspapers (not much). And we speak with Alexander Klöpping, the co-founder of the Dutch micropayment service that’s coming to America.

"How we did it? I honestly have no idea. We built [Blendle] because we liked it ourselves." - Alexander Klopping on how Blendle attracted Millenials to his publishing platform

Alexander Klöpping, co-founder of Blendle, a Dutch app that allows publishers to sell individual articles to consumers. First launched in the Netherlands in 2014, the platform will be coming to the U.S. later this year. Prior to founding Blendle, Klöpping was a business journalist, a tech expert on a Dutch talk show, and started his first company, The Gadget Company, at the age of 16.

AT&T plans to sell DirecTV as a streaming-only service

That’s right. You won’t need a TV, you won’t need a cable box, you won’t even need an antenna. AT&T announced plans to offer 3 tiers of streaming content: DirecTV Now, the more expensive option with the most live and on-demand channels. DirecTV Mobile, optimized for mobile phones with less content — and you can get it whether you have AT&T wireless or not. And finally DirecTV Preview, a free ad-supported service with the least amount of content. AT&T didn’t provide any details on pricing, or what channels or shows you would get, and plans to release the services later this year.

So should we be excited by another player jumping headfirst into streaming, or just shake our heads at yet ANOTHER OPTION. It really depends what content they’ll have — will they include HBO or ESPN? How expensive will they be? As Variety’s Todd Spangler pointed out, DirecTV’s last streaming service, Yaveo — aimed at Hispanics — failed after just one year. But AT&T HAD to try again. While its DirecTV satellite service is still growing, AT&T’s own U-Verse pay TV service lost 240,000 subscribers in the fourth quarter of last year. It might be hard for AT&T to compete with the likes of Netflix, Amazon, Hulu, Sling TV, HBO, CBS and so many others — but they have to try.

Facebook gazillionaire Chris Hughes thought he could turn The New Republic magazine into a digital media powerhouse. He thought wrong. The co-founder of Facebook had a stormy four-year tenure as owner and publisher, bringing in Yahoo veteran Guy Vidra to try to disrupt the 100-year-old magazine. That disruption imploded as nearly the entire staff quit after editor Franklin Foer was forced out. Now Hughes has waved the white flag and sold the magazine to Win McCormack, a fellow liberal gazillionaire who publishes the literary quarterly Tin House, and was co-founder of Mother Jones.

McCormack brought in Hamilton Fish V — that’s right, the fifth! — to right the ship as publisher. Ham Fish, as he’s known, has a storied history as the son and grandson of US congressmen and great great grandson of former New York governor, senator and secretary of state, Hamilton Fish. This Fish hasn’t had political success but did help resuscitate The Nation magazine, and has done well as a documentary film producer. Can Fish and McCormack bring The New Republic back to relevance? They definitely have the publishing chops that Hughes lacked, but time will tell if they can make it a survivor in the digital age.

SnapChat makes a deal with Nielsen to measure ads

Messaging platform Snapchat, all the rage among teens but nearly impossible to use for older folks, has made another big deal to try to win over publishers and advertisers. This time it’s Nielsen, which promises to offer third-party measurement for ad campaigns, so advertisers don’t have to rely on Snapchat for those metrics. Snapchat also recently made a multi-year deal with Viacom to help sell some ads for Snapchat’s own original content.

So let’s line up the fundamentals on Snapchat that we know. 100 million active users. 7 billion video views per day. A demographic that’s digital native and addicted to the app. The company is worth about $15 billion on paper. It has about 20-plus publishers posting content to the special Discover section. But as the tech bubble gets wobbly, Snapchat will need to figure out a solid path to profitability STAT. If advertising is really going to be a part of that, then publishers and advertisers will need more trust than just internal numbers. The Nielsen deal should help in that regard, but Nielsen has a history of upsetting TV networks and producers who don’t believe their TV ratings. Building Trust is the key to making Snapchat a serious ad player.

This is the week that old-school ink-stained wretch journalists all over could exult. They beat Leonardo DiCaprio. Or to be more precise, the movie “Spotlight” about investigative journalists at the Boston Globe, won Best Picture at the Oscars, over “The Revenant,” a survival story starring DeCaprio,

First, I want to rave about “Spotlight,” the movie. I can only take so much of the Academy Awards, so mid-way through decided to watch something else with my wife, and we chose “Spotlight.” I told her it would be a great movie but wouldn’t win Best Picture — or so I thought.

In any case, the movie is fantastic on many levels. As a journalist watching it, you cringe at some of the old boys’ club scenes at the ballpark or on golf courses. And of course, the typical editorial meetings and politics of a newsroom are painfully real. Even the Hollywood actors like Mark Ruffalo and Rachel McAdams had to scruff it up with ugly haircuts and schlumpy clothes to fit in as reporters.

So how could the storytellers keep us interested in watching investigative reporters chase after what became a massive sex-abuse scandal for the Catholic Church? The nitty-gritty details of investigative journalism include sifting through paperwork, making hundreds of calls, knocking on numerous doors. And yet, they pulled it off, by showing all those details and keeping the pacing fast and furious.

Even though we knew the story and what would happen in the end, there were amazing details unearthed, like when reporter Matt Carroll (now at MIT’s Media Lab) put up a photo of one of the houses in his neighborhood where a pedophile priest lived, warning his kids to stay away. And there was a breakthrough moment when an editor got his contact in the Church to break down and start confirming priests who were abusive. These moments were told with sincerity and attention to detail.

And what these journalists pulled off was amazing, telling truth to the power of the Catholic Church right in Boston, where the church is such a strong institution. It’s really the best of what journalism does.

But alongside my rave for Spotlight I have a mini-rant against some of the reactions on social media and from people at newspapers who went too far. Yes, this was a moment to celebrate the work of newspaper journalism. But many people saw this Oscar victory as a turning point, as a way to start selling newspapers and maybe change the dynamic for them as failing businesses.

We saw tweets like “go buy a paper today,” “start subscribing now,” “read more papers.” All fine sentiments, but the reality is that the Oscar win for Spotlight was for that story, told amazingly well, and the vast consequences the investigation had on the church. It’s not going to turn around the problems of print newspapers, and it won’t change business models as they stand.

Like all good stories, it told us what happened in the recent past, and showed us how newspapers used to be, before Facebook, before Twitter, before Snapchat, and even before the iPhone. Now newspapers are trying to find their way, trying to work out a new business model. I hope they do find their way, but I also believe in many other sources for investigative journalism, from public media like Frontline on TV to the Center for Investigative Journalism and ProPublica for non-profit multimedia investigations. nd all the local watchdogs like Texas Tribune and MinnPost. Even BuzzFeed now does investigative work, and we need more experimenters, more digital outlets to be inspired by Spotlight to do more, much more.