The Story Behind AJ+ Español’s Most Popular Video 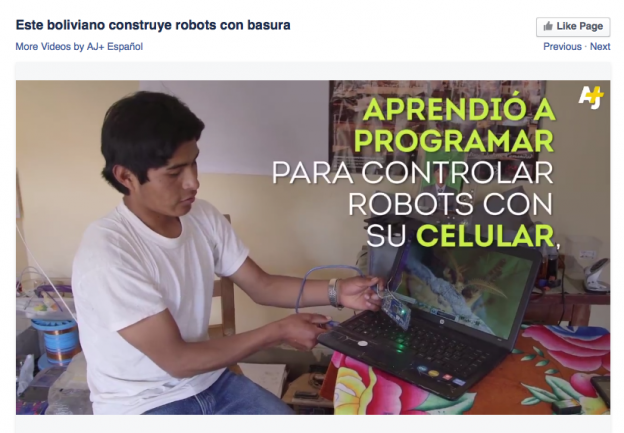 Screenshot from AJ+ Español's video of Esteban Quispe, which has been viewed more than 17 million times.

When Esteban Quispe checked his Facebook on a hot summer evening in his small village in the Andean high plains of Bolivia, he couldn’t believe that he’d become internationally famous overnight.

The 1-minute video about how the 17-year-old indigenous inventor built a robot made out of trash got published on AJ+ Español, the Spanish-language channel of Al Jazeera’s San Francisco-based digital unit, and got shared over a half a million times on Facebook, garnering over 16 million views.

“It was a complete surprise,” Esteban told the Storyhunter blog in a recent post. “I’d been written about by local newspapers before, but this was another level of fame.”

During a screening of the video at #ScreenUpSF, documentary filmmaker William Wroblewski said one of the reasons the video did so well was the visual aspects of the story, along with Esteban’s charisma.

It also touches on an issue that small villages across Latin America are facing: the migration of working-age men to the city, leaving small villages with little economic activity.

For Esteban, that’s where the robot comes in.

“There’s not enough people to do the work, so the robot can help out,” Esteban explains. “My dad is in agriculture and I saw him suffering, so I saw the need.”

On the night of Dec. 6th, Esteban couldn’t believe the thousands of comments the video had received. So he did what any bootstrapped teenage inventor would do: added a comment himself, with his phone number and contact info.

Suddenly, he received dozens of calls from Latin America and the U.S., including someone from Harvard asking him to speak to their students, he said.

He declined. “I don’t speak English, so I don’t know what I would say,” he said (in Spanish).

The other calls he received were mostly to congratulate him, offer him jobs or scholarships to study, and, more importantly for Esteban, people offering to finance his dream of building his own “laboratory,” he said.

That week, Esteban said, his father took a mini-bus to La Paz and opened the family’s first bank account. But the money that’s come in so far, just 200 Bolivianos, or 29 US dollars, isn’t close to what he had hoped.

Despite numerous offers, Esteban says he has no interest in moving far from his home. Instead, he plans to start school this month at one of Bolivia’s largest Catholic universities in La Paz, through a scholarship he won from Bolivia’s Ministry of Education before the AJ+ video was published.

His other focus is raising enough money to build a place with internet access to research a new prototype for an autonomous, solar-powered robot for agriculture. He also needs start-up capital for the parts needed to build it.

“Finding the same exact pieces in the trash would be hard,” he said. “If you’re buying new parts, you can make it faster and reproduce it several times.”

Alex Ragir is a journalist, filmmaker and co-founder of Storyhunter. From 2012, he built the Storyhunter community from scratch to what has become the world’s premier network for video professionals, media companies, agencies and brands in over 170 countries. A former foreign correspondent for Associated Press and Bloomberg News in Brazil, Alex was the recipient of the 2010 Overseas Press Club award for his investigative reporting on white-collar crime in Latin America. He also received the SABEW award for 2010’s best international investigative story. When not hosting a Storyhunter ScreenUp, Alex likes to climb mountains, DJ and mimic people’s accents. Twitter: @alexragir

This AJ+ video was screened at the inaugural #ScreenUpSF event, hosted by Storyhunter at the Second Act theater in San Francisco. For invites to future ScreenUps around the country, sign up here for San Francisco, Los Angeles and New York City.