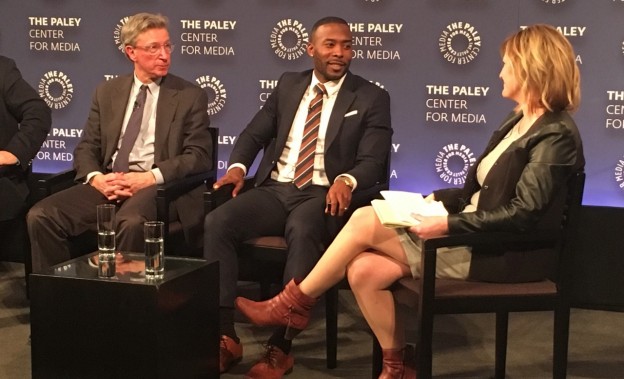 Andrew Hawkins (center) told Kelly Whiteside (right) and Harvey Araton that NFL players go through rigorous media training. "We are trained to give answers that say absolutely nothing," he said.

Four people who depend, at least in part, on communications for their livelihoods gathered at Manhattan’s Paley Center for Media last week for a Montclair State University School of Communication and Media-hosted panel titled “The New Sports Journalism: Opportunities and Conflicts.”

The star-studded panel, which included diverse players in the sport media arena, touched on topics such as access, social media and aggregation. What it failed to do, however, is offer any useful direction to students who might want to jump into the “sports journalism” part of the “new sports journalism.”

“The filters have been taken away (in traditional sports reporting). That brings about an awful lot of opportunities and challenges,” - Felix Alvarez-Garmon.

Such is the out-of-focus, but crowded roadmap of the business in 2016.

Turns out, the athlete and business people – Big East Commissioner Val Ackerman and Felix Alvarez-Garmon, a senior vice president for IMG Media – perhaps had the best pulse on the industry.

“The filters have been taken away (in traditional sports reporting). That brings about an awful lot of opportunities and challenges,” Alvarez-Garmon said.

Hawkins spoke directly to this phenomenon.

“The biggest plus is no filter – [athletes] control the narrative. From a player’s perspective, [your message] does get filtered by the powers that be. We are literally trained what not to say,” he said. “A lot of times it frustrates the athlete.”

The pack mentality of traditional sports reporters, the limited space reporters have to tell stories and the unofficial censorship of the team, league and professionalism play into this frustration, Hawkins said. So, he takes his story directly to fans via social media.

After the panel, Hawkins noted a pair of his 2014 Instagram posts (Part II) that have been viewed nearly 20,000 times. These posts show his personality and life — “All I do is mess around at home with my son,” he said —  and led to several endorsement opportunities.

Hawkins, a five-year veteran, has also taken his message to the online-only publication The Players Tribune.

Founded by retired New York Yankees shortstop Derek Jeter, the platform allows athletes to “connect directly with their fans, in their own words,” the site says. Or, as Hawkins pointed out, in the athletes’ own words as molded by editors with whom the athletes work through Google Docs and emails.

Ackerman, who served as the first president of the Women’s National Basketball Association from 1996 to 2005, discussed short attention spans, curation and the critical need for strategic communications for leagues, teams and athletes.

“The business of crisis communication [is raging],” she said. “The WNBA is a league that very closely tracks its press, as do other leagues, and you have to put a lot of resources in to that. The happy thing for people [looking for jobs] in the business is it’s not going away.”

But, the title of the panel insisted it was about journalism, not strategic communication, promotion and marketing.

Araton is one of the best sports writers ever. That isn’t opinion, or hyperbole — it’s the truth. Nominated for a Pulitzer Prize in 1994, Araton earned the Sportswriter of the Year by the National Sportscasters and Sportswriters Association in 1998. He has published six books, including one that has been on my personal shelf for years.

Admittedly, however, Araton lives in the elite, exclusive sports journalism bubble that is representative of the collapse of newspapers.

“I didn’t even pay for my dental. I don’t see that in the future. It’s a free for all. You might work over here, you might work on a book project,” he said. “I hope it doesn’t become… the one percent — Tony Kornheiser, [Bill] Simmons — making a fortune and everyone else scraping together.”

On the other, Araton advised a student in the audience interested in longform to seek out (the elite and exclusive) digital publications, such as SB Nation and “things like Grantland.” (Note: ESPN pulled the plug on Grantland in October 2015 after four years. Founder Simmons is relaunching a similar endeavor with HBO called The Ringer.)

“They’re not as popular and they don’t hit as many screens, but there’s always been an audience for them,” Araton said.

Also like blockbusters, storytelling for corporations makes money and sustains an industry.

Like indie films, longform struggles to find a home, and the artists/writers who create it have to chisel out a living freelancing, or jumping from project to project.

The right advice for the student in the audience?

Learn to do it all — shoot and edit video and audio, write short, master social media strategies and understand search engine optimization, analyze and present data and understand audiences.

MSU’s School of Communication and Media Director Merrill Brown addressed this notion after the panel.

“We view everybody as a content producer. We’re all content producers,” he said of students in his school. “In our pocket, we carry a complete multimedia device. That’s a basic philosophy we have across our disciplines — we all have to understand content and how to make it.”

Araton didn’t seem to know what to say about this, but he was accurate about that out-of-focus, crowded roadmap.

“The opportunity to tell stories is greater than ever,” he said, “but I don’t know how that will work for the journalists.”

Dr. Molly Yanity is an assistant professor of journalism at Quinnipiac University. She spent 13 years in sports journalism, writing and reporting for the Seattle Post-Intelligencer, ESPN Internet Ventures, Daily Pilot (Costa Mesa, Calif.) and Imperial Valley Press. Follow her on Twitter at @mollyyanity