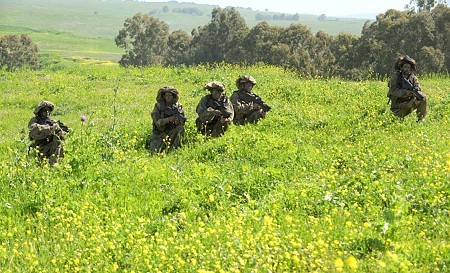 Photos of Israeli soldiers during a military exercise in the Golan Heights. Photos like this are subject to military censors. (Courtesy National Photo Archive/GPO)

Against a backdrop of increasing pressure on the media at large and civil society, Israel’s chief military censor earlier this month issued summonses to dozens of bloggers and Facebook page administrators directing them to adhere to strict guidelines.

According to the summons, which has only been summarized by one outspoken recipient, the military Censor’s Office must give approval before a blog post, Facebook page status, or Tweet can be published.

"In our age it is quite pathetic and it’s alarming because she (the chief military censor) wants control over the information.” - Dan Yakir

Under the orders of Chief Military Censor Col. Ariella Ben-Avraham, notices were issued in early February to approximately 30 popular Facebook pages and blogs.

Traditional domestic and foreign journalists have long been subject to preemptive gag orders. In fact, foreign journalists working in Israel must sign a document agreeing to abide by censorship guidelines when they apply for a state-approved ID card that allows them to work in occupied territories and throughout the country.

The vague wording of the document given to foreign media, which is available online at the Government Press Office, simply states that “all written material, photographs and recordings dealing with security and defense matters intended for transmission abroad, must be presented to the Censor’s Office.” The longstanding practice is considered part of working in the region, but February’s advance on those using new media and social media — including Twitter and Facebook — is new.

The measure employed is one of about 100 Emergency Powers regulations that are part of Israeli statutory law; a holdover from the British Mandate period of 1945. It is technically only allowed during a declared state of emergency, but Israel has perpetually been in such a state since its founding in 1948.

The Censor’s Office did not respond to a request for detailed information about the order, and the exact number of people who received it is not known. The most outspoken recipient of the communique is blogger Yossi Gurvitz, who runs a blog in Hebrew called “George’s Friends” that discusses social, political, and media criticisms of the day.

Another publication called Hevra (Hebrew for Society) told the publication The Seventh Eye they were also targeted.

Though Gurvitz won’t reveal the precise contents of the directive under the advice of his lawyers, he has alluded to its substance.

In an essay published by Public Seminar, Gurvitz skewers the Israel Defense Forces (IDF) over the order, which he has publicly refused to abide by. He said if he went along with the order, he would have to submit, for approval and possible censorship, a wide range of subjects and topics. It would include anything related to military project or expenditures, connections between Israeli universities and the IDF, the arrest of a Palestinian, military contact with the U.S., and on and on.

“So there exists a list of topics that discussion on social media, can make you a criminal — not all of them on the military,” wrote Gurvitz. “You don’t know what’s on that list, and I do know what’s on that list, am forbidden from telling you. So anything and everything you say can, in principle, get you into trouble? Perhaps you better just keep shut. In the end, this is the mark of an effective censorship campaign: you should be scared and silenced.”

Despite Gurvitz’s chilling account of what he faces simply for posting on his blog, Facebook, or Twitter, there doesn’t seem to be a solid legal basis for the IDF’s tactic to preemptively silence those who fall under the category of new media.

“We don’t think the censorship has any authority over bloggers, [just media outlets],” said Dan Yakir, chief legal counsel for The Association for Civil Rights in Israel on Monday. “It is very outdated in the era of the Internet — it is impossible to control.”

There is a parliamentary bill in progress that would potentially change what Yakir describes as “draconian” emergency regulations, but that could take a significant amount of time.

“In our age it is quite pathetic and it’s alarming because she (the chief military censor) wants control over the information,” Yakir said. He doesn’t believe it is directly connected to another recent pushback against traditional media by the Israeli government.

Problems with traditional media came to a head also earlier in February, when public outcry over an erroneous CBS headline led the government press office to state that foreign press credentials might be revoked if headlines are “contrary to reality.” The executive director of the Committee to Protect Journalists, Robert Mahoney, weighed in with a statement on Feb. 8 calling the tactic “a heavy handed approach at stifling unwelcome coverage.”

An erroneous headline was altered under government pressure.

Members of the Foreign Press Association, which represents about 400 foreign journalists in Israel and the West Bank, were summoned to a subcommittee hearing in Israeli parliament on Feb. 8 over perceived biases in coverage. The string of incidents has been likened to a witch hunt by some more liberal domestic media.

Even if it is not part of a larger campaign of pressure on the media of all kinds, targeting social media and new media is still of grave concern to Yakir’s organization.

“It is an alarming step by itself by asking the media to curtail the information they publish,” he said.

Genevieve Belmaker is an award-winning freelance journalist and photographer based in Jerusalem. She frequently writes on the media industry and press freedom, and she is also author of Moon Handbooks’ travel guide to Israel and the West Bank.