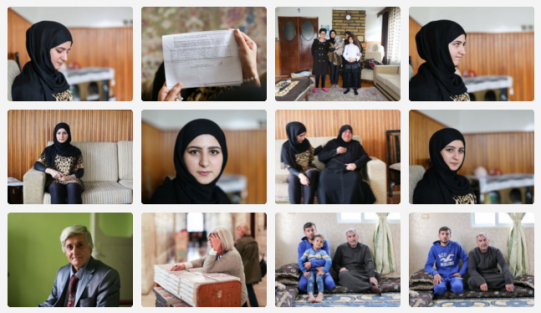 A look at Humans of New York's current archive. Screenshot from website.

Had Brandon Stanton known how quickly Humans of New York would grow when he launched it as a personal blog in 2010, he might have simply called it Humans. The photographer’s Facebook community is now twice the size of the city he first set out to census. His reach is far greater — HONY regularly receives high profile drop-ins from the likes of President Obama, Hillary Clinton, and even NASA. But it would be disparaging to measure Stanton’s impact with mere likes, comments, and shares.

True to established etiquette, Brandon would begin his photography career as a listener and an observer. He had a knack for extracting the raw humanity from his subjects, and the resulting interviews were breaths of fresh air in newsfeeds pervaded by half-truths and highlight reels. But it wouldn’t be long before he started advocating and fundraising on behalf of his most inspiring subjects. Millions of fans were practically begging to get involved, and HONY couldn’t ignore the opportunity to bridge the divide.

"But HONY understands that charitable audiences need more than a quick glimpse of humanity to be moved to donate."

Humans of New York’s charitable arm grew in 2012 during the aftermath of Hurricane Sandy. After traveling to the city’s hardest hit neighborhoods to document residents and volunteers, Stanton partnered with Tumblr founder David Karp to raise money for them, $318,530 to be exact. In the years since, HONY’s philanthropic efforts have raised millions more for individuals and organizations the community has deemed deserving. In the age of social fundraising, the former bond trader from Marietta, Georgia seems to have discovered the formula for success.

To make sense of it, we must look it in practice.

This past August, Brandon announced he was concluding his most recent visit to Pakistan with the profile of a very special subject. Her name was Syeda Ghulam Fatima. Over the course of 24 hours, Stanton introduced the middle-aged Pakistani woman to the HONY community on Facebook, sharing her story and the stories of individuals whose lives she’s affected. Fatima runs The Bonded Labour Liberation Front, an organization which seeks to eradicate modern day slavery in South Asia.

It is estimated that well over one million people in modern Pakistan are subject to bonded labor — the most widespread (yet least known) form of slavery in the world. The majority of these men, women, and children end up at brick kilns, of which there are north of 20,000 throughout the country. The kilns are part of an oppressive system that manages to drive workers deeper into debt the more they try to work it off. Fatima has dedicated her life to breaking the invisible chains that bind the hands and hopes of her people. She has freed thousands, but the work is far from complete.

True to his narrative style, Stanton presented each story through the words of Fatima and the families she’s helped over the years. One by one he posted their interviews to Facebook, slowly architecting a story of injustice, hope, and ultimately redemption. When the final piece of the narrative puzzle was put in place, Brandon unveiled a campaign on Facebook to raise money to fill the Bonded Labour Liberation Front’s rapidly depleting coffers. In the first 12 hours, 40,000 people donated $1,000,000.

So, what can we learn from this?

Every charity and nonprofit on the web today is in the business of storytelling. Fundraising in the social age just isn’t possible without it. Campaign fundraising in particular is especially ripe for the craft— where there is a defined purpose, there are people, and where there are people, there are stories. But in the case of Fatima and other individuals HONY has raised money for, Stanton does something most organizations don’t.

There is a pervasive misconception that social media storytelling must be succinct by its very definition. If it doesn’t fit in a tweet, or above the fold, we’re told we must find a way to ‘cut it down.’ In the case of Fatima, Humans of New York seems to have broken — even shattered — every rule in the handbook. The story played out across a total of seven independent Facebook posts, connected only by a manually-input set of numbers (1/7, 2/7, 3/7…) in the text itself.

It would have been easy for Stanton to sit down with Fatima for a few minutes, pluck a quote or two, and stitch together a short profile to share with the world. In fact, it would have been on brand for him. But HONY understands that charitable audiences need more than a quick glimpse of humanity to be moved to donate. They need to get to know the people involved on a personal level; they need to understand the injustices at play; and, once they’ve given, they need to see how the story ends, because they’ve become part of it. The lesson, then, is quite simple.

HONY Stories comes out in less than one week! I’ve already said a lot about the merits of the book. So I want to take…

Posted by Humans of New York on Wednesday, 7 October 2015

Humans of New York is unique in its ability to boast complete independence as a media entity. Brandon has never taken money from a brand, never published a sponsored post, never given in to the dimming allure of the display ad. He couldn’t if he wanted to — HONY is too grounded in transparency and authenticity. Instead, Stanton makes his living almost entirely through book sales. He’s published three since 2013 — Humans of New York, Little Humans, and most recently Humans of New York: Stories. Each time he does, his audience is treated to an exceptionally rare event.

On October 7, less than a week before Stories hit the streets (and the New York Times bestseller list), Brandon published a raw and honest appeal to his community. In it, he laid out the page’s revenue model for the world to see. The post served as a reminder to audiences that they bear more responsibility for the success of HONY than merely liking and sharing content. Stanton also explained where the money from book sales actually goes. From the post:

Proceeds from books have been used to pay for trips to twenty different countries over the past year alone. Even when working with large organizations like the United Nations or UNHCR, I’m always very careful to cover all costs and reimburse any expenses. I do this so that the content on HONY can remain entirely independent, self-directed, and transparent. By purchasing a book, you can help HONY continue to grow in a way that remains focused on telling people’s stories—and nothing else.

For nonprofits, there’s a lot of insight to be gleaned here.

How do we reach audiences?

Organizational fundraising tends to be much more difficult than campaign fundraising. Whereas campaign funds go toward tangible works-in-progress, organizational funds are typically earmarked for nebulous work-to-come. In the era of instant gratification, that’s a much harder sell to audiences. The day-to-day expenses of a nonprofit aren’t always glamorous or inspiring, but they are nonetheless integral to its sustainability. It’s a non-profit’s job to make donors aware of it.

Proper education of your community is a delicate task for one simple reason — nonprofits hate to talk about themselves. The work is never about you, after all. It’s about the people you’re serving, and the injustices you’re combatting. Humans of New York understands this better than anyone; that’s why Brandon so rarely features himself in his photos. However, when you’re fundraising for your organization’s longterm viability, it has to be about you. Your donors are betting on your ability to institute change, and you need to prove why you’re the right group of people for the job.

Sometimes, though, an emotionally-driven monologue still isn’t enough to sway the people. Sometimes, you have give more to get more. Stanton’s solution for Humans of New York is a brilliant one — offer the community an opportunity to make a palpable expression of their support in the form of a printed book. It’s a veritable Kickstarter perk, a donation in disguise. Best of all? Within its pages are a thousand little reminders that great storytelling isn’t free. The lesson this time around is just as simple.

Don’t ask for donations. Appeal for them.

The success of Brandon Stanton’s Humans of New York since its launch in 2010 has proved that thoughtful storytelling remains the most effective way to raise money for important causes. Though the stories may change form as time goes on (see: Facebook’s recent investments in video and instant articles), the rules will always remain the same — be thorough, be transparent, be human. Fred Rogers’ mother once told him you will always find people who are helping in the midst of great need. As change agents, it is our job to show them how, and why.

Luke Kingma is a freelance tech and travel journalist based in New York City. His work has been featured in publications large and small, from The Wall Street Journal and USA Today to Untapped Cities and Futurism. Follow him on Twitter.