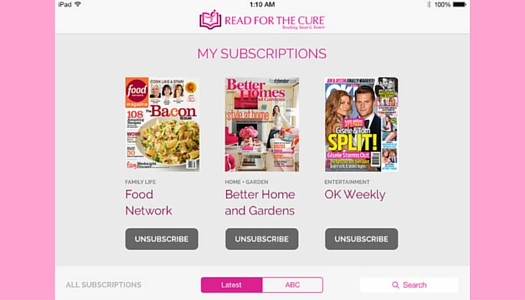 In the race to figure out whether print is dying or e-readers are here to stay, one thing that’s often left out is the “how.” How do you pry those glossy, perfume-scented magazines out of people’s hands and get them to try something new? With their new app, Read for the Cure gives print magazine lovers a reason to put down their tomes and jump the digital divide for a good cause.

As part of 2015’s State of the News Media report by Pew Research Center, Katerina Eva Matsa and Elisa Shearer reported that about half of the news magazines they studied “received significantly more visits via a mobile device than a desktop (at least 10% more traffic via mobile than desktop.)” Couple that with Mequoda’s estimation that Americans will spend more than $1.3 billion on digital magazines in 2015, and you can start to see the spending power that magazine readers have. Now imagine that the dollars you spend on your latest digital copy of National Geographic, O, or Sports Illustrated could actually be used for more than just entertaining you on your next beach vacation.

“People love the reading experience alongside the charitable aspect of the app. It’s a win-win.”

Read for the Cure, established in 2007, introduced a new magazine subscription app in October to support of Susan G. Komen’s mission to save lives and end breast cancer forever.

“We’re very grateful to key partners like Read for the Cure for helping us fund lifesaving research, and community programs that support families living with breast cancer,” says Christina Alford,  Susan G. Komen SVP of Development. “With the launch of their app, they’re bringing new and creative reach to Komen’s mission to end breast cancer.”

Twenty percent of all magazine sales through both the Read for the Cure website and the newly launched app is donated to support Susan G. Komen, which invests in groundbreaking research, community outreach, and increased breast cancer survival rates. Read for the Cure’s minimum donation to Komen in 2015 is $250,000 for 2015. Since Read for the Cure began, more than $2 million dollars has been donated to Komen. The app team is banking on the idea that magazine subscribers will try something new for the chance to contribute to something good.

Readers can adjust font, font size, and more in the Read for the Cure app’s ‘reader view.’

Máire P. Walsh, Digital & Online Strategy Director for the Read for the Cure app, says the response to the app has been overwhelmingly positive. “People love the reading experience alongside the charitable aspect of the app. It’s a win-win.”

In addition to having access to a vast array of popular magazines, when someone downloads the app, they automatically receive a free issue of a magazine. The app also offers two different reading displays: a standard magazine view, as well as a ‘reader view’ where subscribers can adjust font type, size, and background.

The app also offers a newsfeed featuring popular articles from leading magazines, along with the latest breast cancer and breast health resources and tips to stay healthy.

So far, 57% of those who have used the Read for the Cure app have done so through smartphones, while 43% are using iPads. “With the shift to smartphones for media consumption,” says Walsh, “we are hoping our emphasis on the reading experience serves our consumers and magazines fittingly.”