The Art of Cinema Journalism 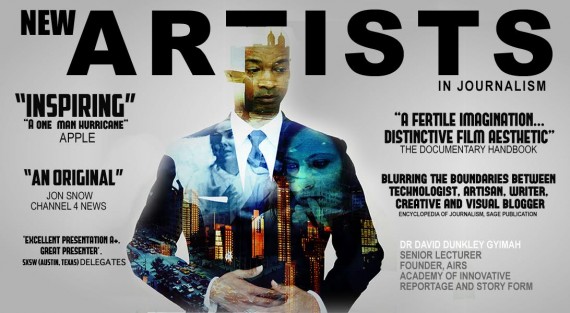 According to David Dunkley Gyimah, cinema journalism is a form that arises from practitioners’ artistic intentions, the inadequacies of conventionalised videojournalism and an audience’s reception for thought-provoking content. Image from Gyimah.

3.2.1… a flash ignites. A loud din prevails momentarily. Then an eerie silence descends… people scatter for coverage. Four hours away from Aleppo, Syria, I’m reviewing a film made by Hakewati, a former theatre director and actor. It’s a much-purloined film clip from which the theatre director turned videojournalist has not seen a single penny (that’s a whole other matter). But how do I shape this into a larger news narrative? I turn to artistic videojournalism, also known as cinema journalism. It’s a form that arises from practitioners’ artistic intentions, the inadequacies of conventionalized videojournalism and an audience’s reception for thought-provoking content. In 2005, an international panel of judges in Berlin pronounced my work as ‘artistic videojournalism.’

Writing in 2005, and since cited in the “Encyclopedia of Journalism,” I say, “If you could combine the art of motion graphics and photography; the mise en scène, spatial and temporality of cinema; the language of television; the sonic skills of radio broadcasting with users behaviour online, I believe we’d be closer to understanding the power of videojournalism.”

"This new era of artistic videojournalists or cinema journalists look to their audience for active participation."

But they killed videojournalism.

In the age of plenty and commerce-cum-innovation spinning one new journalism form after another (drone, immersive, mobile, etc.), cinema journalism is surprisingly long in the tooth, yet it remains untapped. Still, I wager it’s set to make its presence felt in interesting ways.

An Introduction to Cinema Journalism

Media experts and marketers talk about the boon in video and the need to create compelling content, but how, from what language or observable visual-textual-oratory style when content is pervasive? What schema? Dimitri Doganis, producer of the Oscar nominated “The Imposter” says, in between the gaps of fixed genres is an alchemy where innovators experiment. He mixes tropes from fictional cinema and documentary to create documentary-cinema. This approach has form in poetic and performative docs, as well as docu-dramas — an accepted if problematic genre to define.

So where does cinema journalism of artistic videojournalism surface? It can be confusing because its etymology is between discursiveness and artistic practice. And it’s not to be confused with its sister, video journalism, that surfaced in the 1960s. Unfortunately, several leavened indexes of web pages on the subject don’t capture the distinction.

I can tie it to my own career more than 20 years ago, but there are sign posts left on news filmmaking’s winding road, such as the 1960s with the late Robert Drew’s Direct Cinema or Cinéma vérité. One of Russia’s most famous filmmakers Dziga Vertov, a journalist editing newsreels, was described by admirers as seeing cinema in life. Yes! Seeing that thing that many an untrained eye cannot, which captured in situ triggers different receptions by the viewer. In fact, Vertov’s “Man with a Movie Camera” was voted the eighth best film ever made.

Twenty years ago in the UK, 30 youngsters including the aforementioned Doganis and I became the first officially recognized videojournalists in the UK courtesy of a newspaper group, Associated newspapers. The art of making films, having editorial independence, creating and mixing multiple forms – what was dubbed Robocop journalism became a tour de force, garnering wide publicity from the English media. Imagine that? A whole TV station’s output from news to programs, such as reality docs predicated on videojournalism. Post 1990s, videojournalism would be kneaded into its now recognizable institutionalized form; the Les Enfant Terribles of new journalism found its ambitions tamed.

To understand how it slipped into this, we need to go back to the creation of the singular most brilliant story form for news with global recognition, the news package. It was a piece of story engineering condensing temporal events from real time into, usually, under two minutes of screen time. The news package was as daring as Gustave Flaubert’s “Madam Bovary,” deemed by many literary scholars as the first modern novel or John Grierson credited with inventing the documentary form.

However, the news package’s strengths, in time, have shown up its weakness. It’s not its fault. Time, culture, society, technology and their impact on storytelling has moved on, as they should. According to former senior BBC executive Pat Loughery, responsible for breaking videojournalism into the BBC in 2001, the news package, approaching pensionable years cannot be the answer to modern reportage. It made no room for any other style for truth telling.

Hence, we were made to believe in its exclusivity, its attainment of balance, objectivity and impartiality in its discourse. We reconciled these apparent character traits nonetheless, against a purported and often real slide into yellow journalism. Camera men and women shot GVs (b-roll), shots to mask an edit were cutaways, and so-called rules were necessary e.g. rule of thirds to provide compositional structure. They’re not rules, perhaps guidelines. The use of GVs (B-roll) obviates specificity, and cutaways are somehow meant to be devoid of symbolic meaning. And we the viewer invariably see the world through the cameraman or woman’s shoulder height — all axiomatic of broadcasting’s sense of neutrality. Contrast this with fictional cinema makers where every shot counts, and image direction is motivated towards creating an overall impressionable narrative.

This is not to denigrate the package (as I show off here), and that it’s defunct, but to say in a hypervisual literate era, the traditional story construct offers one version of storytelling. Just as Gustave’s literary form moved on and Griersonian documentaries, challenged by a free cinema movement of sorts in the 1950s, (he called the group upstarts) now has Longinottos, Oppenheimers and Moores.

With camera in hand, and free of television’s devised constraints, many frustrated videojournalists with experience in news making found solace in art, including fictional cinemas tropes to tell compelling stories. Photojournalists like W G Smith figured this out years ago. He, like the new wave of videojournalists recognized that their work is not neutral, a background (mise en scène) communicates something to the viewer; a camera angle, its movement, translates emotions. Artistic videojournalists know it’s not about bolting on cinematic clichés onto a film, for cinema is much too complex. Pier Paolo Pasolini and Abbas Kiarostami’s cinema was often stripped of effects and exegesis.

In moving from one country to another, for example Egypt, Lebanon and China, I recognized in my own work, from peer-reviews, as much as those I interacted with, that they could delineate a story into plot. They could see cinema and artistic scenes in the environment and often align them to their encyclopaedic film knowledge to convey their intentions. They recognized that all film is a construct, and whilst subjective, they can still bare witness to truth. Kovach and Rosenstiel in their book “Elements of Journalism” downgrade objectivity and impartiality in their ten-point list.

Above all, this new era of artistic videojournalists or cinema journalists look to their audience for active participation. They, like their fictional practitioners, understand that filmmaking entails an unlimited palette of styles and techniques. Just as mobile cinema, drone cinema or glide camera cinema appear tautological, cinema journalists motivated by the story use whatever style and technique that appears appropriate to the overall story. To paraphrase Tarkovsky, the artist “is capable of going beyond the limitations of coherent logic, and conveying the deep complexity and truth of the impalpable connections and hidden phenomena of life.” News can be so much more than explicit adumbration.

Creating engaging and emotive stories is one thing, but how do you teach this hybrid form? Is it not merely documentary? Cinema is a mutable, imbricating technique and skills whilst wrestling with art, cognitive dissonance and symbolic meaning. It varies over time and place and in cultures. The doyens of news aren’t going to accept this so easily, just as they gave Drew short shrift. In my interview with the late great filmmaker, he chuckles at the thought of traditional newsmakers finding great visual shots and ruining its impact by talking over them. We rarely deconstruct the moving image compared to the emphasis placed on distilling literary works.

But there’s a difference this time. This new multi-hydra network; the web, public spaces, galleries facilitate fresh discourses. In 2010, the director of the renowned Southbank Centre, Jude Kelly OBE provided me space and resources, as an artist-in-residence, to experiment in these platforms. I produced several pieces, ranging from installation films in between stage performances, interactive photo-driven media, and shorts. Why can’t artistic videojournalists produce news for the Museum of Modern Art. At CUNY, Professor Jeff Jarvis’ ‘Reinventing TV and Video News’, in which I was invited to speak, there was ample evidence of new visual thinking.

How do you make your media compelling? 3.2.1. That initiating incident again, but this time playing backward. For a brief moment, you may have experienced what it was like for a young woman to be caught up in a bomb blast. Her life flashed before her eyes, time slows down. Fade to black.

Dr. David Dunkley Gyimah is an international award winning videojournalist and knight Batten Winner for Innovation in Journalism. He’s been a journalist for 25 years working for, among others the BBC, Channel 4 news and ABC News in South Africa. He’s behind AIRS (The Academy of Innovative Reportage and Story Form) which creates, among others, interactive factuals, photomontages, and promos. He’s a senior lecturer at the University of Westminster, former artist in residence at the prestigious South Bank Centre work, and a 20-year member of the revered Chatham House. His work has garnered much praise over the years by senior broadcasters and cited in various academic and broadcast books. He’s completing his book: Pioneers of the new video age. You can contact him at [email protected] and view more of his work at www.viewmagazine.tv