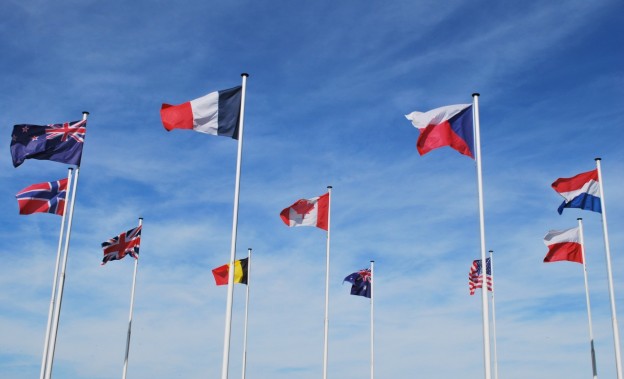 Photo by Dan Dickinson on Flickr and used here with Creative Commons license.

As France mourns the recent attacks on its civilians in Paris, politicians from the U.S. and Europe have expressed their solidarity with a nation still reeling with loss. The November 13 shootings that unfolded at six locations in Paris were undeniably jarring for the people of France, as well as for their supporters in Europe and North America. More than one hundred people were killed in these shootings, and at least 300 more were injured that night. By the next morning, a number of media outlets were participating in a highly emotional international discussion about what had happened.

It’s understandable that people would respond emotionally to such a horrible event. And, since the news media are also comprised of people — human beings, susceptible to emotional and physical strain — it’s also understandable that initial news reports of the attacks might reflect the fear and sorrow that such events inevitably inspire.

"We might unfortunately see U.S. news organizations taking an Islamaphobic approach to covering the Paris attacks."

Still, if journalism scholars and practitioners have learned anything from the U.S. news media’s uncritically patriotic response to 9/11 and the later war in Iraq, it’s that reporters need to balance these emotional impulses with a healthy dose of skepticism. This cautious approach shouldn’t fall by the wayside just because something terrible has happened. In fact, it’s in the coverage of tragedies like the Paris attacks that we need this balance the most.

Global media ethicist Stephen J. A. Ward suggests that “affection for one’s country” is inevitable in journalism. He also argues that there’s a difference between “moderate” and “extreme” patriotism in news reporting, with “moderate” patriotism requiring a critical, measured approach to news coverage. This cautious stance is part of the patriotic journalist’s job, because to properly inform your democratic public, you need to be able to ask the right questions and balance that information with multiple perspectives.

Ward offers this notion of moderately patriotic journalism to help us improve national coverage of national events. But he also says that as the boundaries between nation-states begin to dissolve in a globalized world, journalists must begin to apply this patriotism — this “affection for one’s country”— on a more global scale, instead cultivating affection for humanity as a whole.

At first glance, U.S. coverage of the Paris attacks might seem like an example of this more global version of patriotism. Numerous U.S. media reports have, after all, echoed President Barack Obama’s assertion that the attacks on Parisian civilians were an “attack on all of humanity.” Other reports have analyzed the U.S government’s potential military response to the shootings, linking U.S. foreign policy to that of France. Indeed, U.S. news outlets have overwhelmingly connected France’s plight to the plight of its own citizens, showing an affection for a nation outside the U.S.’s own geopolitical borders.

Yet, there’s a danger here. Rather than displaying a more global version of moderate patriotism, this news coverage could instead very easily slip into what Ward calls “extreme patriotism,” a far less critical cultural loyalty that forecloses the possibility of asking tough questions or attaining a truly balanced perspective. By its very nature, this extreme patriotism cannot be global, because it demands an “us versus them” mentality in order to function at all.

A replica of the Statue of Liberty in Paris in front of the Eiffel Tower. Photo by Chadica and used here with Creative Commons license.

In this case, the U.S. news media’s show of solidarity with France might instead be a result of what Indian journalist and media scholar Prasun Sonwalkar calls “cultural proximity.” This term refers to the similarities that some cultures share, similarities that cause them to show more interest in each other’s struggles than in the trials of less “culturally proximate” groups.

Sonwalkar notes that this cultural proximity often guides specific news outlets in their decisions about whose perspectives belong in the news. In other words, the less culturally proximate you are to a given news organization, the less likely it is that your perspective will be given serious weight in that organization’s coverage.

We’ve seen this kind of thing before. Numerous media scholars have documented the problem of patriotism in U.S. news coverage of international events. In the U.S. coverage of 9/11, for example, there was very little discussion of the international perspectives on the U.S.’s long-standing foreign policy in the Middle East. he U.S. media also betrayed a marked suspicion toward Islam in general, which may well have helped foster the persecution of Muslim-Americans across the country.  Patriotic coverage of the 2003 invasion of Iraq in turn resulted in a dearth of perspectives from Iraqis who were critical of the invasion. When U.S. news outlets did tend to think internationally, they usually only drew upon the perspectives of North American or European nations with which they had a military alliance.

This impoverished news reporting could easily happen again. We might unfortunately see U.S. news organizations taking an Islamaphobic approach to covering the Paris attacks, for example. These reports might also end up ignoring the perspectives of moderate Muslims or simplistically conflating all Muslims with the extremists who orchestrated the shootings. Finally, this dangerous coverage might situate the Paris attacks within the broader discourse of U.S. exceptionalism, encouraging U.S. leaders to play the cartoonish role of “cowboy” on the world stage.

At this point, U.S. journalists and news editors have a big choice to make: will they embrace a more moderate form of patriotism — one that carefully considers the humanity of all people — or will they slip into the more extreme patriotism of years past, applying that patriotism only to cultures that are more proximate to their own? Proceeding without caution could result in the cultivation of an even more trenchant Islamophobia across the U.S. and Europe. It could also result in an ahistorical and politically impoverished account of why these attacks ever happened.

Lindsay Palmer is an assistant professor of global media ethics at the University of Wisconsin-Madison. She is interested in the ethics of war reporting after 9/11, and she especially focuses on journalists’ safety in the field. Follow her on Twitter, @lnpalmer2000.