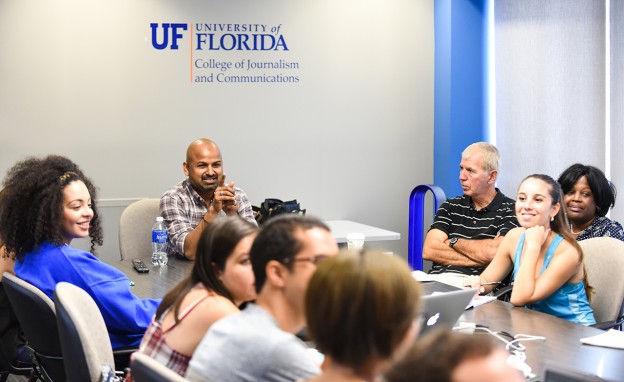 If there’s one thing Rafat Ali has learned how to do well, it’s to build something out of nothing. He has a history of of making connections other people just don’t see. Once he was a prototypical “blogging-in-a-bedroom” story. No longer.

Now, Ali is the CEO and founder of Skift, the world’s largest industry, intelligence and marketing platform focused on travel. He recently visited the University of Florida’s College of Journalism and Communications as the fourth guest in the college’s Innovators Series, where he imparted his own experiences with keeping start-ups successful.

“Don’t get caught up in the future of journalism. The debates are circular and endless. What you need to care about is the future of your career and the subject you’ve chosen.” - Rafat Ali

“This is an online digital arena from an audience perspective, and it’s been great,” he said. “It’s such a giant industry, and we’re just getting started.”

Skift has risen from a staff of two people to 17 in just three years. And they’re already turning a profit.

Ali feels that being able to cover a niche like travel from all angles is part of what makes Skift work – something aspiring journalists can learn from.

Ali earned a bachelor’s degree in computer engineering from AMU in Aligarh, India, then hopped around, working in public relations and other spheres. Once he decided he wanted to write, Ali knew he had to head where the action was. He came to the U.S. as a Knight Fellow at Indiana University, where he completed his master’s in journalism in 2000.

After graduation, he started a blog called paidContent – and people liked it. Soon others started inviting him to speak at conferences. Advertisers wanted to be a part of it. All of a sudden, something different was going on.

“PaidContent was an accidental company,” Ali admitted. “I was a journalist turned blogger turned entrepreneur.”

He learned on the job, a good skill for aspiring journalists to have. He stayed with paidContent for nearly nine years, covering news, information and analysis of the business of digital media.

When the UK’s Guardian News and Media came to him with an interest in buying the company in 2008, Ali accepted. The company sold for an undisclosed sum just months before the financial crisis.

Rafat Ali, CEO and founder of Skift, speaks to journalism students and faculty as part of the Innovators Series speaker set. Photo by Ryan Jones.

Ali spent two years traveling, reading books and learning more about the media landscape. He also was a co-host of “The Mediatwits” podcast on MediaShift.

Lots of people have tried to make travel startups and many fail, he said. Ali employed a test: he wanted his new company to be indispensable.

“If your media brand died tomorrow, would anyone miss it?” Ali asked. “Will your shutting down harm the ecosystem you’re a part of? Nine out of ten cases would probably fail this test.”

“Skift stands for today,” Ali added. “It’s defining the future of travel. There are no qualifiers to what we do. We do what we do.”

In the early days of the Internet, industries were rigidly separated. Media, entertainment and music industries existed in separate spheres. But Ali knew that for his companies to stand out, they had to succeed in bringing many groups together.

“I took that theme of connecting the dots and brought it to Skift,” he said. “Consumers use searches to jump across [various sectors]. There needs to be a digital info brand to connect all those dots across the sectors. We cover everything in travel. And that original vision has stayed.”

See the need, then build, Ali said. Building a direct channel to users is the most important part.

Rafat Ali, CEO and founder of travel startup Skift, speaks to journalism students at the University of Florida. Photo by Ryan Jones.

Skift has a staff of 17, each with specific tasks. Being a travel company means, of course, that the company travels. Their employee summit takes place in a different exotic location each year, such as Iceland earlier this year. The company also regularly profiles unique cafes, puts out trend reports and holds an annual conference that about 800 people attend.

Finding the right people to fit his company’s culture and voice is tricky, Ali said.

“I don’t want a jack-of-all-trades,” he added. “I want to hire the master of one. In my field, specialization matters.”

As a CEO, Ali has to be able to weave all the threads together. Building the company while tuning out the “noise” of the media world is essential, he said. He said journalism schools that can achieve this will be able to stay relevant in the changing digital age.

In the past, Skift pushed out close to 40 stories a day. Now, editorial works on five – and pulling back on creation hasn’t hindered the company a bit. Less is more, Ali likes to say. Five pieces of daily quality work is more important and impressive than 40.

Quality of life is important. His staff never comes in to work on a weekend.

Starting a company and starting a career carry similar lessons. Ali impressed many of them on the student journalists he spoke to.

“Today, journalism is about a human voice in covering industry,” Ali said. “Don’t be afraid to have a point of view.”

He suggested that the two most important things for getting started are to spend money on a good lawyer to help you set it up correctly and invest in a good design.

“A good design helps you punch above your weight,” he said. “The reality is everyone else’s was so crappy. The sheer fact of showing up and doing something slightly better helped us.”

Networking is important. Having a voice “out there” is important. Ali believes that print media, when employed strategically, still have a future. But there’s a lot more to it now – audience acquisition has changed.

Finding what channels work best to reach readers is an art that is difficult to teach. Social media, content marketing and email newsletters all play a factor. Journalists, he said, should work on this sense of analytics. After all, their stories have to be read in the first place.

Ali encourages journalism students to work while in school and create a body of work to show employers. In school, you can make mistakes and learn by doing.

“Don’t get caught up in the future of journalism,” Ali said. “The debates are circular and endless. What you need to care about is the future of your career and the subject you’ve chosen.”

Ali chose travel as his sector and said no matter the “noise” in media, there is always room for another startup.

Dahlia Ghabour is a senior at the University of Florida studying journalism. She currently works as an editor at the university’s NPR affiliate, wuft.org.