How to Build a Multi-Product Mindset in Student Newsrooms 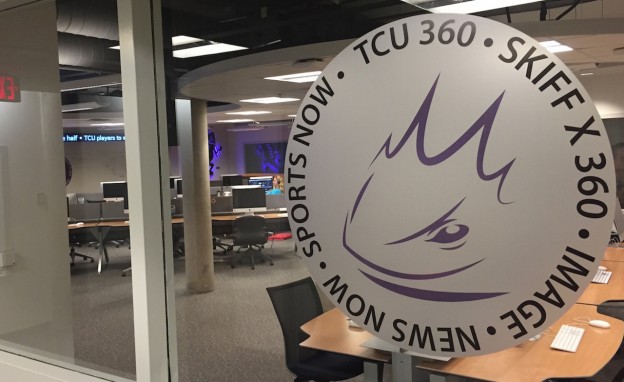 As with many college news organizations, our journalism students here at Texas Christian University tell stories in a variety of ways: text, video, photos and more. The stories can run in several places, too — among them our 113-year-old newspaper, The Skiff; our campus news website, tcu360.com; and our campus cable newscast, TCU News Now.

This kind of thing happens every day in student newsrooms nationwide. In some places, these different publishing destinations are called platforms, but the definition of that term can vary depending on who you ask. At TCU I encourage our students to think of those publishing destinations as products, each with its own audience, goals and mission. It’s an idea that has taken shape for us over the past year, and I’m finding that it helps clarify students’ thinking.

“I think it is helpful because you’re able to categorize where the news fits best, in which [product] you’re really able to serve your audience.” - Evan Watson

Why Take This Approach?

The teaching goal of this approach is twofold: first, to get students thinking about the best way to tell each story (and then doing it, of course). Second, after the story has been produced, they need to figure out the best place to publish it — i.e., the best product(s) to showcase that story.

I’m the director of student media in the TCU journalism school. My colleagues and I advise our student journalists as they produce content for seven different products across two separate news organizations, both of which are student-run. They operate in parallel with separate staffs, audiences and missions.

TCU 360 is our primary news organization. 360, as we call it, covers news that happens on campus, as well as stories that interest the TCU community. 360 publishes six products:

360 also produces a daily five-minute newscast for KTCU-FM radio, which is operated by a different academic department.

Our second news operation is called The 109. It’s a hyperlocal news organization named for the 76109 Zip Code, which surrounds our urban campus in Fort Worth. On its responsive website, the109.org ,The 109 covers news in the Zip Code and stories that interest people who live there.

TCU Student Media went to a digital-first approach in 2012 and put all of the student media products under one executive editor (later we split off The 109 to its own operation). My TCU colleague Aaron Chimbel, an assistant professor of professional practice in the journalism school, was a student media adviser at the time. In an interview, he told me that having a single editor managing the entire operation makes it much more cohesive. “It allows you to focus on content,” he said, “and what’s the best placement for it, the best approach for sharing that content.”

Benefits of the “Product” Approach

Much of the time, it’s clear to our editors where to publish certain stories. A text story about student government, for example, would likely be published on our campus news site, tcu360.com, and possibly in the newspaper. Usually there’s no reason to publish that story on the109.org because it’s not relevant to that audience.

But other stories are not as clear-cut. One example: last spring the city of Fort Worth started considering zoning changes for houses in the TCU area. Students covered the story for our campus site, tcu360.com, because it affected students who rented houses in the neighborhood. They also covered it on our community site, the109.org, because that’s where these houses are located. Each site has its own audience, and that story was relevant to both.

This kind of crossover doesn’t happen every day in our newsroom because the geographic boundaries defining each site’s coverage area are clear. And usually, those geographic boundaries also define the audiences: TCU students generally don’t care about school board meetings, and local residents aren’t interested in student football tickets. But the ability to recognize those cases when the nature of the story redefines those boundaries is a more nuanced skill, and it’s one our students should be learning. That’s when thinking of the different publishing destinations as products is the most helpful.

Each of our products has a specific target audience and mission, which help shape the editors’ decisions about what goes where. For TCU 360, publishing stories on the website is automatic. (For The 109, it’s the only option.) But what then? I interviewed TCU 360’s executive editor, Evan Watson, and he said he likes the idea of products when it comes to decisions about story placement. “I think it is helpful,” Watson said, “because you’re able to categorize where the news fits best, in which [product] you’re really able to serve your audience.”

Even just within TCU 360, our campus news organization, Watson and the other editors still have to decide where to publish each story. Another example: in 2012, TCU’s starting quarterback was arrested on suspicion of drunk driving (and later pleaded guilty). I asked Watson how he would want to cover that story today for our television newscast and sportscast. “For the sportscast you can take a more athletic perspective to it and you look at … the impact it can have on the team,” he said. “The newscast can look at it from a news perspective and maybe what impact it has on the university as a whole or university policy or its reputation.” The angle of the arrest’s effect on the team might not interest the newscast audience, but it could easily be the main concern of the sportscast audience.

We’re not even a year into using this idea of products. I know it needs refining, but it’s working well so far. I’ve learned that for our student editors, it helps clarify their thinking and decision-making about story placement. For me as an adviser, it provides a good framework through which I can help them learn to make better decisions.

Kent Chapline is an instructor and the director of student media at Texas Christian University. He teaches classes in digital and broadcast journalism and was a 2014 co-recipient of a Knight Foundation Prototype Fund grant. Before teaching, he worked in local newsrooms for 20 years as an award-winning television newscast producer and digital media director. Follow Kent on Twitter at @kchapline.