An Anniversary of Innovation: Learning from the Knight Batten Award 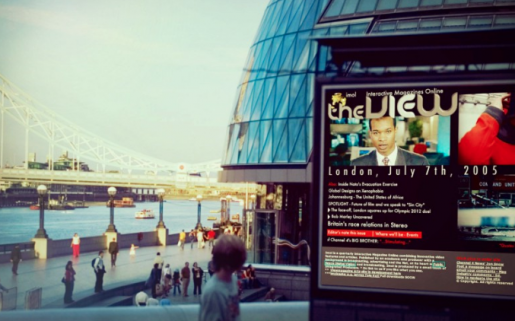 Dr. David Dunkley Gyimah has worked on projects like the Outernet — a communications platform which is the antithesis of the Internet.

Many of us, at some point, wish for a nod of approval from our peers. It validates our commitment as much as the hard work executed behind the scenes.

This acknowledgement comes in several forms: winning the pitch, closing the deal, a Twitter fest of likes and shares, momentous book sales, and awards. The latter pits you publicly against the competition — a yard stick for measuring your status, albeit on the night, and indeed also the legacy that “this” cannot be taken from you.

"Acknowledge those giants whose shoulders you placed you hands upon to help you see farther."

When Viola Davis clinched a primetime Emmy for the U.S. hit series, “How to Get Away with Murder,” she made history as the first black female to do so. At that moment on that stage, the glory, the light was hers. Undoubtedly, the next day it would be back to business. Awards provide a fix, but it’s an overcoat you wear with care. You’re only as good as your last job.

One aspect about awards is that perhaps you (like me) aren’t supposed to win them. You, being the person who merrily and passionately goes about your business in the shadows without any thought of awards, whilst others more social, gregarious grab the night’s headlines. A couple of years ago, a company celebrating the excellence of its national citizens abroad emailed me to say I had been nominated within their media category. However, any victory on my end could only be accomplished by a campaign to woo friends, family and new supporters to vote for me.

I still attended the awards at the London Hilton Hotel and clapped for the winner who sobbed on stage thanking all her supporters. But one major U.S. award was unexpected and did alter my career in many ways, and as such taught me various lessons about how not to get trapped by one’s own beliefs or Andy Warhol’s 15-minutes of fame schema. But first some background.

A decade spans micro generations of innovation in digital. Think about it: YouTube, Twitter, Facebook. Then there are outfits and people like us — digital flecks back in 2005 trying something out. It is the year when a project I would complete in the quiet of the nights would be acknowledged by one of the U.S.’s most revered supporters of media innovation annexed to its prestigious prize, J-labs’ Knight Batten Awards.

The Knight Batten, which I was not fully aware of back then was the Emmy for new digital media. Every major media institution from CNN to the BBC to the New York Times wanted to bag its gong. The publicity alone was immeasurable.

Like many, not by design, I was a soloist — something I would mask when submitting my work. I was a Brit working on a hunch, a prototypical video journalist, an ex-network television producer and reporter, and a coder.

What could be wrong? Lots. I was frustrated by the status quo.

In 2002, following severe cut backs at one of the best companies I have worked for, Channel 4 News, I had to contemplate “what next.” Dot-coms followed and some high profile media work:

But the problem was once the events passed, there was no legacy of them. There was no way of sharing, revisiting their knowledge or gaining pleasure from the production. No way to spawn a conversation to critique and build upon our endeavors. Traditional media still dictated terms.

I had tapes of interviews with Roy Ayers, George Clinton, Quincy Jones, Fela Kuti and South Africa’s successor generation voting in their first all-race election. But I might as well be Hilts ‘The Cooler King’ (Steve McQueen’s character in The Great Escape) throwing a baseball against my cell wall.

It had been a tiring day as we settled down at Ozer a Turkish restaurant near the BBC in regent street. We’d just finished a photo shoot in central London to illustrate the Outernet,  a communications platform which is the antithesis of the Internet, when a call came in.

Caller (Jan Schaffer): Hello is this David?
Me: Yes
Caller: We’d like to invite you to Washington, if you can come. Your work, Viewmagazine.tv has been shortlisted…
Me (The rest is a daze; I can’t remember anything other than agreeing)

At the Marriott Hotel in Washington, trying to find my way around, I ask someone I think works there for directions. I discover the next day it was Jimmy Wales, the creator of Wikipedia. The National Press Club in Washington exudes grandeur and history, and is as much intimidating as it is imposing. The awards are scheduled to start in the morning with various presentations. I meet the organizers and finalists, and, yes, I am nervous. Mark Hinojosa, a moderator for the Batten Awards Advisory Board and Associate Managing Editor for the Chicago Tribune, breaks me gently into my presentation with a generous story.

He was going through the entries, he says, ready for bed, when he stumbled upon my submission. It looked good, but its navigation was confusing and some content was difficult to access. The site hid video behind photographs that was not obvious. But something had him intrigued. He called his son to have a look who nonchalantly ran through the site, accessing pictures and video, as if he’d spent a lifetime on it.

In my presentation, I would apologize. Viewmagazine.tv, I would admit was not a team of creatives, but just me. But who would take me seriously? So I asked friends to help by submitting photos and video that I would recut. I can’t be more grateful to them.

The awards ceremony was a pulsating event. Whatever would happen, I knew I would be equally preoccupied producing a video journalist report. There were five spots, glass trophies hidden under a blue veil. I reckoned, I would be in 5th place so sat gingerly at the front ready to get back to filming.

But the script did not go according to plan. In 5th place… in 4th place… in 3rd place… By now, not only could I not get the shots I was thinking about, but also kept thinking there was a mistake in proceedings, or (gasp) I’m about be offered 2nd place (runners up). In 2nd place is …( heart almost stops). No! And first place is Viewmagazine.tv! If you watch the video, my reaction is out of character; I actually do not know how to respond in this new limelight. Adrian Holovaty, an amazing coder, would be named the grand winner for his site ChicagoCrime.org which used data scraping to show crimes in Chicago. The after-party and conversations flowed into the small of the night.

It’s been a whirlwind since. The Knight Batten Award opened a window and provided an impetus for me to keep creating. It led to invitations to talk and share at several events e.g. Andrew Nachison’s 2006 WeMedia event at the BBC and Reuters, where I met Jeff Jarvis. Eight years later Jarvis would ask if I would like to come to CUNY to present my ideas about the future of TV.

In 2006, I submitted a piece of work to the International Videojournalism Awards for a report that involved me training the UK’s first regional newspaper journalists. Sometimes your luck comes in pairs — mine did.

In between those years, many presentations, collaborations and countries have become part of my digital record of events: SXSW, MojoCon, the International Journalism Festival, India, Macedonia, Europe, Africa and the US. But the Knight Batten, alongside other awards, would be the catalyst for my most herculean project.

It led me to ask a number of critical question. Can these processes, these sources of innovation be captured as methods? What next for the styles of news filmmaking and forms of cognitive audience reception that enamours me and viewers? And who are the pioneers (not companies per se, but individuals) across the world pushing the frontiers of this form?

Those question were answered in one of the most challenging and rewarding pursuits of knowledge which covered the aforementioned and took me to near the borders of Syria.

And also Egypt,  around the time of its uprising. I had been commissioned by an agency to see if I could help reform TV making for their national network.

And in Chongqing, China, working with their universities to create new story forms.

And then earlier this year receiving my doctorate.

And in this, one of three videos presented at Apple, I pay homage to one of the key figures whose work is an inspiration — the late great Robert Drew.

But this eulogy to the Knight Batten, a decade following my transatlantic experience, could not be complete without a pass-it-on. Something I have learned through my odyssey, and in no particular order, they go like this.

I’m grateful too to Leornard Witt then at Kennesaw University; Jan Schaffer of the Batten Awards; Tom Kennedy, who’s been a constant for help; Mark Hinojosa, who is now an associate professor; and many many more as we continue to interrogate our ideas.