The Difficult Ethics Around Showing a Murderer’s Video 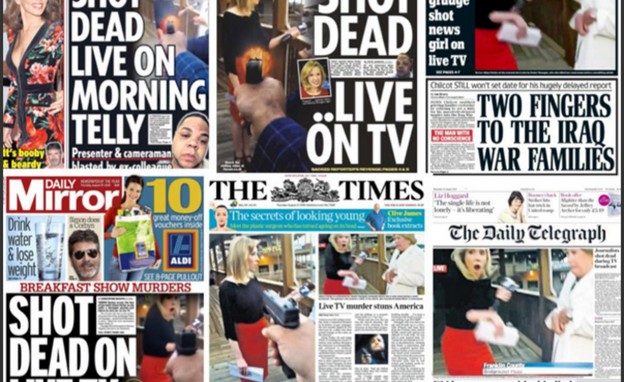 A depiction of front pages that ran images from the killer's video via @Charlie1Proctor on Twitter.

When two WDBJ journalists were murdered on live television last week near Roanoke, Virginia, the ethical debate over “how much is too much” in terms of coverage was never more evident.

This is an increasingly more and more complex decision that falls on the shoulders of journalists, which is nothing unusual. But these days, technology companies and, now, the public itself are also part of the process. To make things more difficult, there are no easy answers or obvious choices.

“Put yourself in the shoes of the victim or the victim’s family. How would you like to have the murder of a loved one replayed millions of times?” - Jordan Ghawi

Newsrooms like the New York Daily News and NPR, in the days since the shooting, have shared justifications for or against airing or sharing the shooter’s point-of-view video of the ambush that killed Alison Parker and Adam Ward. These gatekeeping decisions are not taken lightly. Policies are in place. Most organizations (hopefully all of them) realize there are ramifications for the difficult decisions they make – decisions often made in the course of a few minutes, sometime seconds.

Journalists weren’t alone in making that call this time, however.

Who bears the responsibility?

When the shooter shared his video on Facebook and Twitter, all users played the role of gatekeeper. On Twitter, they had roughly eight minutes to decide whether to pass it on to others. On Facebook, it was a few minutes longer. That means Twitter and Facebook made ethical decisions to take down the shooter’s profile.

And the ethically murky waters didn’t stop there. Many users on Twitter and Facebook unwillingly watched at least a portion of the POV video because of the networks’ auto-play function.

“I think it’s a question for Facebook and Twitter from a technology perspective,” said Gilbert Martinez, a media law professor at Texas State University. “They’re probably trying to figure how to appease the advertisers that are going to want auto-play, because that exposes their products and services, while also keeping in mind there might be something like this where people get very upset. Facebook and Twitter are dealing with this in real time just like the rest of us are.”

With the click of a button or touch of a thumb, more than 500 people on Facebook and countless others on Twitter subjected others to the shooter’s perspective. Should we, meaning everyone, be sharing first-person accounts of murders through our social media accounts in the first place?

Depends on whom you ask.

“If you’re trying to contribute to a meaningful discussion about gun violence, then videos like this are required viewing to understand the horror that is going on,” Martinez said. “It says something about access to firearms. It says something about turning those firearms against innocent people. And I don’t think our society is served if we censor certain things because of taste or sensitivity.”

On the other hand, that taste and sensitivity is at the core of concern for the families of the victims.

“Put yourself in the shoes of the victim or the victim’s family,” said Jordan Ghawi, whose sister, Jessica, died in the 2012 Aurora, Colorado movie theater shooting. “How would you like to have the murder of a loved one replayed millions of times?”

This particular incident raises new concerns because the shooter, himself, shared a video from his own point of view, but what about videos of other shootings? Several thought pieces, including this from The Atlantic, point out that we’ve spent the past year or so watching smart-phone videos of violence against African-Americans on the news and on social media with little to no ethical uproar over coverage.

So what’s the right answer?

Like most incredibly difficult issues, the answer to that question is probably somewhere in the middle.

Ghawi, whose mission since his sister’s murder has been to ask media to focus on the victims instead of relentless coverage of the shooter in situations like these, has seen some progress since 2012.

“I believe we were successful in challenging the media to reevaluate coverage of such events and the type of platform that we provide those who commit such acts,” Ghawi said. “I also believe that the brevity that social media, specifically Twitter, forces encourages using monikers such as ‘shooter’ rather than full names.”

And there’s also no doubt that sharing and viewing videos, as happened with the videos of violence against African-Americans, plays a major role in bringing issues into the national debate.

“We share things, and some things make us upset,” Martinez said. “But we shouldn’t run from the things that make us upset. Sometimes we need that to spur us into action and spur change.”

It’s a discussion the public is now a part of, along with companies like Twitter and Facebook that provide the platforms for lightning-fast dissemination of content in these situations.  Journalists can play an even more important role by being completely transparent in how and why these decisions are made. The public should demand as much, so they have a basis of opinion for their own split-second choices of whether or not to share.

There will be a discussion on Twitter today, Sept. 1, 2015, at 1 pm Eastern Time / 10 am Pacific Time, about covering trauma on social media, related to the shooting. Please join us at the #EdShift hashtag then, or you can see the Storified version afterward here.