MuckRock Brings Together Journalists, the Public to Keep Government Transparent 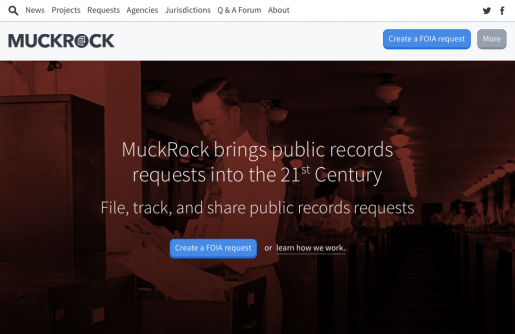 MuckRock is a collaborative news site that gives people the tools to keep government transparent and accountable.

You might think of FOIA requests as something a single, intrepid reporter does in a vacuum, completely unaware of other requests the government is fielding, but on MuckRock, sometimes it’s a form of organized action. Sometimes people band together and follow various strategies to get the information they want.

The platform Alaveteli provides a similar service in dozens of countries from North America to Europe to Hong Kong and Rwanda.

Both want to give citizens the chance to questions their government and get ahold of information but last week MuckRock announced its Projects program to gather info through records requests then pay for a reporter to seek answers.

The platform was created with newsrooms in mind but today only about 1/3 of users are reporters. The rest are activists and people with specific interests, like the woman who seeks Scientology requests or the NSA contractor who was suddenly shut down after a records request.

MuckRock has used crowdfunding to retrieve documents in about 40 incidences.

More public records requests (22) have taken place this than any other time since its founding in 2011. Among them: Early this summer three different news organizations searched for details from a multitude of organizations surrounding a bid to host the Olympics in 2024.

A month later, the city dropped its bid.

A short while ago, Through the Cracks sat down with founder Michael Morisy to talk about the surprising, unique, powerful results of mixing crowdfunding with collective public records requests.

This interview has been edited for clarity and brevity.

A Conversation with Michael Morisy

Through the Cracks: What is the success rate of crowdfunding campaigns carried out on MuckRock?

And you know, I was surprised when we had three Boston Olympics-related requests that were all $300-400 and I kind of figured that’s a very local issue and people would get tapped out on that fairly quickly but they were funded very quickly, in the course of a few days, and people were incredibly supportive.

Through the Cracks: What are some of the public records requests users initiated that you just didn’t see coming?

Morisy: There’s sort of expected stuff like FBI files on dead people and that sort of thing but I think there’s a lot of creativity around not just pressuring the mayor’s office for the Olympic bid, sort of filing with others as well, the kind of divide and conquer approach where you’re playing different agencies off each other and that’s something that would have never occurred to me.

It was super exciting. Then there’s the police militarization stuff, the 1033 program at the federal level. We were tipped off to that a year and a half ago by a user who just signed up for the site and filed a request saying, “Hey, what is my local police getting under this obscure program? I mean a year and a half ago almost nobody was talking about this. All of a sudden you saw like wow this university police is getting MRAVs and some really heavy artillery and that ended up being a big, national project that we ended up collaborating with The Marshall Project on, all because somebody noticed something local and then got back some really interesting information, and we kind of had to scale to kind of broaden that out in every state.

MuckRock partnered with the Marshall Project to reveal what gear the Pentagon gave cops.

And time and time again we sort of see projects started with somebody asking about 1033 and Stingrays started about a year ago and all of these started out with individual MuckRock users who just kind of start with a question. They don’t know the answer and often don’t see what they’re doing as journalism. They’re just filing a request and answering their own personal questions and a lot of times that does you know kind of expand into sort of really important stories going down the line.

Through the Cracks: It occurred to me when looking at the site and the collective work your users do together but it used to be common knowledge that a letter to Congress would have more impact than a call or email. Have you seen a similar phenomenon when it comes to crowdfunding or crowdsourcing of FOIA requests?

Morisy: Yeah it’s definitely something that we take notice of. We are seeing that one way or another that it’s having a bigger reaction than if it was filed on its own.

Some more sort of progressive agencies do kind of see “OK, there is a crowd a groundswell of support around this or public officials kind of say… We’e seen a lot of things that we’ve seen people gripe about for years kind of get fixed when there is this sort of public request, when there is something that a lot of people are funding.

I also think you see agencies sometimes see that and sort of kind of bunker down almost which I think is really unfortunate, so I think it kind of depends on the leadership, political leadership as well as agency leadership, in terms of how they take this.

I think most of our readers and most of our followers still want a constructive dialogue around these things. That’s why they’re using public records and they’re not trying to leak information or sort of they’re not calling for anybody’s head but we’ve kind of seen a whole range from agencies who get really hostile to having a public records request made publicly and some really embrace it.

Morisy: I’m sort of curious how you see things developing to you as your kind of seeing everything going out there?

Through the Cracks: To me it’s the increasing or the continued democratization of it. That’s always to me the most interesting portion of any technology. There are big campaigns like El Español and Positive News that bring in hundreds of thousands or millions of dollars and there are the smaller campaigns for photo collectives and all those little spaces crowdfunding can fit into.

I hate hearing people say crowdfunding isn’t for everybody or it’s not the silver bullet. Just think about how it can fit into the strategy. I think it’s foolish to think of it as something that’s going to save everything and in some cases it does because some people are so super awesome, but most of us are not. So..

Morisy: Yeah, it enables a lot of stuff that wouldn’t otherwise happen. That’s what’s most exciting to me. It’s sort of it’s really engaging an audience and allows stuff to happen at a local level that wouldn’t happen which has been super cool. I think one of the things we got started with is an essay by Korey Doctor out a couple years ago that said “People want to support stuff so find a way to let them support it” and that’s really what we’ve seen.

Like our average donation is about $50 which is way more than I would ever pay for anything but for some people it’s well worth it and they keep supporting it because it’s something they’re passionate about whereas before there was no way to pay for an individual article or individual FOIA request in this way and it’s been super cool to see how it lets people contribute in ways and people who don’t have money it kind of lets people who do do some really cool important work.