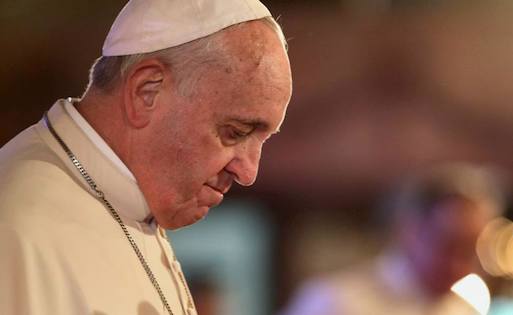 What do Pope Francis and sports stars have in common?

Quite a lot, according to Jason Deal, the Executive Vice President of the Catholic digital media company Aleteia. Both attract specific dedicated followers. And both figures, unlike individual celebrities, also represent the larger teams behind them.

"I wanted to apply to the campaign around the Pope’s visit to a lot of the principles they [Sports Media Challenge's members] use...How to engage your fan base and how to reach out and attract new fans through social media." -- Jason Deal, executive vice president, Aleteia

“You don’t cheer for Kobe Bryant, you cheer for the Lakers,” Deal explained to MediaShift in a recent interview.

It was with that premise in mind — trying to get people to cheer for Catholicism and everything else the Pope represents — that Aleteia hired the social media agency Sports Media Challenge, to help its members prepare for covering the Pope’s recent visit to the United States.

“I wanted to apply to the campaign around the Pope’s visit a lot of the principles they [Sports Media Challenge’s members] use,” Deal said. “How to engage your fan base and how to reach out and attract new fans through social media.”

The idea to create a hashtag around Pope Francis’ visit, #GoodIsWinning, came after Deal and the others at the Aleteia office noticed that a spontaneous hashtag, #PopeIsHope, would appear whenever he traveled. They realized people, especially millennials, were responding on social media to what the Pope represented to them because that is the medium they already use to express themselves. Being able to generate excitement around the Pope while also reaching out to this audience soon became one and the same.

Pew Research shows that millennials are much more likely than other age demographics to not identify with any particular religion. More than half of people who are raised Catholics, meanwhile, also report having left the church at some point, according to different Pew Research study on religion.

“Getting young people to engage around religion is not an easy task,” Deal told MediaShift. “And it’s not something their lifestyle engages around.”

That lifestyle, though — smartphone driven, multitasking-oriented — is what makes Deal say his team actually “cheated” with the social media campaign. It had created itself when #PopeIsHope started to appear on social media feeds. It just didn’t yet have an organized platform through which it could be celebrated and distributed.

Crowdsourcing who wanted to help the cause

Once the idea around a social media campaign got underway, Aleteia held a user-generated contest to see who might be a good fit to participate in its “digital street team.” The company asked young people to share how #GoodIsWinning in their world. From their submissions on Vine, Instagram, Snapchat and the like — and many of the people who submitted weren’t religiously affiliated, according to Deal — Aleteia picked 10 finalists, and then two winners.

Those winners were deployed on the ground this past week alongside other social media workers. Those Pope cartoon fans you saw on TV? Handed out by the digital street team. The Pope emojis you may or may not have heard about or received in a text message? They were also generated by the street team online and passed around by word of mouth.

The Pope emojis were widely successful and had been downloaded about 81,000 times since it launched on September 10 as of the weekend, Deal said. And more than 800,000 emojis have been sent.

Whether this could be attributed to people wanting to cheer solely for the “Catholic team,” however, is hard to say when you look at the Pope’s personal charisma and character, and the fact that many of his fans aren’t necessarily Catholic.

“For a lot of those people,” Deal said, “what grabs the people is his authentic leadership, the work he’s trying to do to get leaders of the world to focus on the environment, social justice and to promote interfaith dialogue.”

It’s also difficult to say whether this particular kind of social media strategy could be utilized for just any pope, since he himself has employed different ways of “framing” the Catholic message compared to his predecessors. Michael O’Loughlin, reporter for the Boston Globe’s Crux and author of “The Tweetable Pope,” told CBS News, “He has a small team of advisers, who come up with the messages, but Pope Francis gives them the themes, the ideas that he wants to be communicated.”

While it also might seem a bit ironic that talk of “branding” and “social media strategies” would be associated with a pope who comes off as quite anti-capitalistic, for Aleteia — or perhaps any other religiously-associated group or non-profit looking to distribute a message rather than a product — their kind of marketing strategy is a bit different from what people may be used to.

“A brand is simply a promise,” Deal told MediaShift in response to the question. “And I think there’s a lot of cynicism and skepticism amongst consumers about consumer brands because brands don’t always keep their promises.”

“But Pope Francis has talked about the truth.”