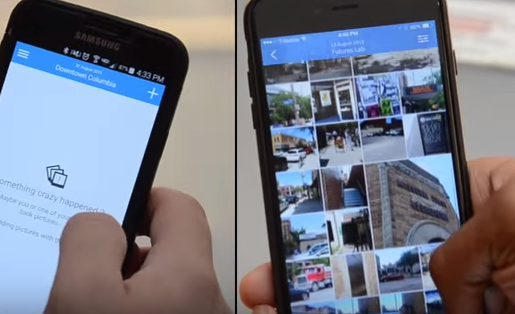 Photo collaboration apps are particularly useful for teams of reporters working together. Screenshot courtesy of RJI.

This week we explore apps for organizing photos from multiple smartphone users, and we see how the Associated Press is using automation to expand its college sports coverage.

"Most of the apps have a social network-type feel; they all allow users to caption, like and comment on photos. Each app has built-in mobile notifications that alert contributors when photos have been added, commented on or liked." -- Daniel Shapiro, Futures Lab

Several different apps can help you compile and share photos taken by multiple smartphone users — particularly useful for teams of reporters working together. We give an overview and dive into the features of five options: Crossroad, Bundle, Cluster, Carousel and Moments.
Reporting by Daniel Shapiro.

A quick rundown of the apps:

The Associated Press is using an automated system called Wordsmith to generate text stories from college sporting events. We find out from News Automation Editor Justin Myers how the technology expands what the news organization can cover.
Reporting by Berkeley Lovelace.

The stories are being produced in partnership with the NCAA, which is providing the data, and a company called Automated Insights, which created the Wordsmith technology.

The Associated Press has been using automation for sports data for several years including delivery of sports agate, according to a company release. Automation has also been used to rank NFL players for AP’s Pro Football Digital News Experience including “automated text descriptions of player performances each week, which were provided by Automated Insights.”

The Reynolds Journalism Institute’s Futures Lab video update features a roundup of fresh ideas, techniques and developments to help spark innovation and change in newsrooms across all media platforms. Visit the RJI website for the full archive of Futures Lab videos, or download the iPad appto watch the show wherever you go. You can also sign up to receive email notification of each new episode.