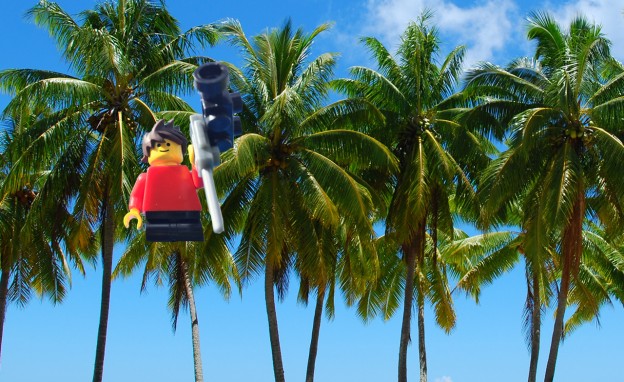 This piece is written with students in the Senior Multimedia Capstone at Florida International University’s School of Journalism and Mass Communication.

Journalism students tend to go through college balancing the “thinking” of theory courses with the “doing” in their majors. News rules in J-Schools, and research papers are set aside as students swap style guides, tossing away APA style for the AP.

"After examining my community in terms of its local media coverage, I've seen the great extent to which how and what is covered by media perpetuates what is already believed to be true by the majority." - Alexander Stella

So how can theory help make journalism better? Is there a reason for academic research in reporting?

This summer at Florida International University in Miami, some of our students traded notepads for endnotes to examine how media research steeped in critical and cultural theory can comment on and help improve local news.

FIU journalism students created videos, like the one above that’s about water troubles in Los Angeles, to promote their research on local news. Credit: shatterbe.lt.

Within local journalism from cities across the U.S., students examined:

After examining the cases through social and cultural theories and methodological rigor, students — in a period of six weeks — posted the best of their reports on a project called NewsGeo on shatterbe.lt, a website focused on research and storytelling related to news and geography named after a concept in human geography that describes areas of contested spatial meaning.

Journalism students loaded their research to a website focused on geographic storytelling in the news. Credit: shatterbe.lt.

Students also produced video trailers to attract attention to these research papers, which include suggestions for how their interpretations and findings related to cultural discussions of local issues and events can make “better journalism.”

Students said the experience of applying theory to understanding journalism outside of their own geographies was unusual for a capstone class that’s usually focused on producing journalism, but that trying something new might just help them make their own journalism better.

“We were warned from the beginning that this wouldn’t be our typical senior multimedia project class,” said Camille Williams, a graduating senior. “It was a challenging experience — one that I think gave me a taste of what grad school will be like. I probably learned more in these last six weeks than I have in my entire college career.”

A Reason For Research?

Increasingly, media spheres continue to develop, audiences become further fragmented, and “the news” becomes something harder to sell. Its cultural functions also become more mired in discussions of technology, innovation, and delivery. Scholarship helps us understand how and why audiences respond to news and, at the same time, can tell us something about our audiences.

Intellectual outcomes, said student Cynthia Perez, will help her address, as a journalist, the meanings behind how she covers stories in the future. A main benefit of using cultural theory to explore the news, she said, is to help explain why some news resonates with fellow journalists and audiences and to what degree types of reporting on some stories can contribute both to community building and destruction.

“I realized how some of these social norms in how journalists report the news may have negative impacts on society,” she said, noting that journalists across the U.S. tend to support local economic development, for example, while marginalizing voices of those who may be negatively influenced.

This summer’s project was an opportunity to blend theory and practice to supplement work being done at universities and in newsrooms across the country that use forms of scholarship, such as audience analysis and participatory methods of reporting to influence and improve journalism.

Similar to organizations like Journalism That Matters and engagement positions within newsroom organizations such as those at Gannett, ours was an experiment (see syllabus) to see how the journalism classroom — often focused on reporting and writing — can also be home to academic research, particularly that based in critical and cultural theory.

Critical/cultural theory provides a depth of understanding, sometimes through anthropological approaches and participatory methods. Students read dozens of pieces of scholarship related to cultural meanings of journalism, met with media researchers who were doing their own work, and viewed  journalism and popular films through which they could apply scholarly perspectives.

Tani Kiah surveyed newspaper coverage of women near her hometown in upstate New York who were sentenced on drug-related charges. She found that the language journalists used there and the sources they quoted typified these women as anomalies compared to the dominant community ideology that women serve in feminine roles.

“Being from the area, I grew up never really considering the way people spoke about women or how the media tended to portray female criminals as inherently different from the roles women are ‘supposed’ to serve in the community,” Kiah said. “It was eye-opening to see that the media can serve as a way to further social institutions like traditional gender roles.”

As part of their final project, students shared their work with panelists who Skyped in, including LaTasha DeLoach, a social worker and community leader who works frequently with media in Iowa City, Iowa, as well as Jennifer Hemmingsen, the opinion page editor at The Gazette, in Cedar Rapids, Iowa.

Both panelists provided unique perspectives on the role of local journalism in creating and covering community.

A third panelist, Matt Ehrlich, a professor at Illinois who studies cultural meanings of news, provided yet another perspective related to student research.

“Having presented critical perspectives on the news to students over the years,” Ehrlich said, “I can say that they can be mind-opening in the best of ways, but they also can sometimes make some students feel as though the media are so messed up that there’s not much point in trying to change or improve things. Hopefully encouraging them to think in terms of practical suggestions/solutions helps mitigate against that.”

Learning Lessons: Ideas For The Future

From this experience, there are some major questions that we’re still asking about how to integrate this kind of research project into a more traditional journalism class.

We’d love to hear your thoughts on what we’ve said here. Tweet to @RobertGutscheJr.

Robert Gutsche, Jr. is an assistant professor in the School of Journalism and Mass Communication at Florida International University who focuses on geographic place-making and the role of power in news coverage of everyday life. His new book, Media Control, is due out this fall.