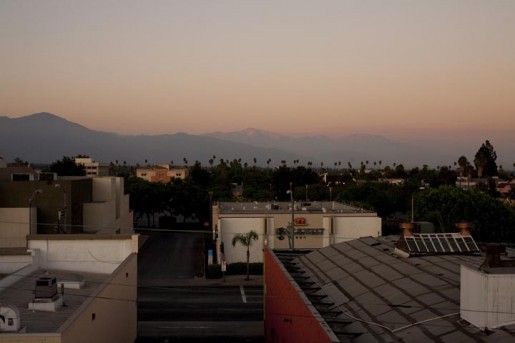 Landscape image of Alhambra, a Los Angeles suburb at the crossroads of two national trends: a drop in local news coverage and a diversified population. Photo by Konrad Fiedler.

Alhambra, a predominantly immigrant suburb located about 10 miles east of downtown Los Angeles, is at the crossroads of two national trends: a drop in local news coverage and a diversified population. Five years ago, University of Southern California’s Annenberg School launched the multilingual site Alhambra Source to investigate how local news can impact civic engagement in a diverse community. Since then, nearly one hundred youth reporters and volunteer community contributors have written about their global suburb for Alhambra Source. An eclectic group, they range from high school students to retirees and combined speak more than 10 languages. Throughout, doctoral and journalism students under the guidance of professors Sandra Ball-Rokeach, an expert on community news networks and civic engagement, and Michael Parks, former editor of the Los Angeles Times, have studied community information needs and the impact of the site.

I recently left USC and Alhambra Source, where I was founding editor, for a new position at the LA Times as community engagement editor. Below are four of the lessons learned that I am taking with me about working with residents in diverse neighborhoods.

1. Suburbs are the leading edge of demographic shifts

Alhambra’s ethnic transformation foreshadows national trends. A half-century ago, the city of 85,000 was predominantly white. Alhambra youth today are more than 90 percent Asian and Hispanic and likely to be found at late-night boba tea sessions, watching a lion dance down Valley Boulevard for Lunar New Year, or working on dance moves with a pan-ethnic hip-hop crew at JayVee Dance Studio. Suburban neighborhoods across the country will increasingly face changes similar to Alhambra. Within 30 years, minorities will be the majority in the United States, with the fastest-growing groups being Asians and Latinos. And no longer are most immigrants heading to crowded central cities, but instead straight to the suburbs. The Los Angeles area is leading the shift with 2.6 million immigrants residing in suburbs, according to a Brookings Institution analysis.

Another change that Alhambra shares with many communities nationwide is a decrease in local news coverage. Alhambra’s history of dedicated publications goes back to before the city’s 1903 incorporation. But the last dedicated local newspaper, the Alhambra Post-Advocate, ceased publication in 1993. Nearly two decades later, when Alhambra Source launched, coverage was minimal and days would go by when there was no story mentioning the city. This occurred at a time when just over half of Alhambra’s residents were immigrants, and many were adapting to an entirely new system of government.

But ethnic media coverage in the area has exploded. The city and surrounding areas are home to bureaus for three international Chinese-language newspapers. Each one employs reporters with beats that include covering Alhambra for the local immigrant community. This reporting also contributed to a divide within the city. Most residents, and in particular people in leadership positions, could not understand Chinese. USC researchers found three distinct “storytelling networks:” ethnically Chinese, Latino, and Anglo. These networks go beyond where people read news to conversations with neighbors and connections to local organizations. In focus groups and interviews, diverse residents and leaders identified a lack of local coverage that bridged language divisions and was accessible online.

We knew we never would be able to produce a steady stream of content in all the languages spoken locally. We also understood that providing content in another language, alone, would not engage community members. Instead, we relied upon a multifaceted approach of building connections with existing ethnic media outlets, cultivating a multilingual team, and working with USC students and community members to translate select content.

Key to covering the diverse community was that the story ideas were not only coming from an editorial meeting, but local contributors. Their ideas reflected varied experiences: contributors present on any given day may be a long-time Los Angeles Police Department employee, a community college student with a love for photography and politics, and a grandmother working on her bachelor’s degree. Without Alhambra Source, they would have walked by each other on the streets as strangers, but because of the site they came together.

Alhambra Source created a cycle where local, community-based news coverage effectively engages new voices in civic life. A good example of how this worked is when community contributor Siye Walter Yu, a courts interpreter by profession, urged in an opinion piece that City Hall and social service organizations adopt foreign-language social media to reach Chinese residents. Alhambra Police Chief Mark Yokoyama read the story. He invited Alhambra Source for a meeting, and we collaborated on creating the first Weibo (a Chinese version of Twitter) account for a local government agency in the United States. Answers to questions Chinese residents in Alhambra – and across the country – had about local policing would be printed in three languages on Alhambra Source. A year later, the Weibo account had more than 40,000 followers, calls from Chinese residents to the police increased, and the Alhambra Police Department received an “Excellence in Technology Innovation” award from the California Police Chiefs’ Association.

Representatives from a new generation have also engaged with local issues, and introduced key questions. In one of our first stories, Anthony Perez, at the time a recent high school graduate from Alhambra High, asked why no Latino students were elected to student government in 2010 when the school was 50 percent Latino, 50 percent Asian. His piece triggered discussion, and the school effectively pushed for more Latino participation such that almost half the students elected in 2014 were Hispanic. In a story looking at representation through a different lens, Albert Lu asked why Asians of his parents’ generation were voting at lower rates than the general public. His piece prompted City Councilman Luis Ayala to invite him to serve on an Alhambra government committee, where Lu has cultivated a personal interest in politics. These exemplify steps, whether they be online or around a table, where Alhambra Source has paved a way for residents to connect to their leaders and each other, and in doing so transform the communication fabric of their city.

Daniela Gerson (@dhgerson) is Community Engagement Editor at the Los Angeles Times. She was previously founding editor of Alhambra Source and director of the Civic Engagement and Journalism Initiative at USC’s Annenberg School for Communication and Journalism.