The Prime Importance of Desirability in a News Startup 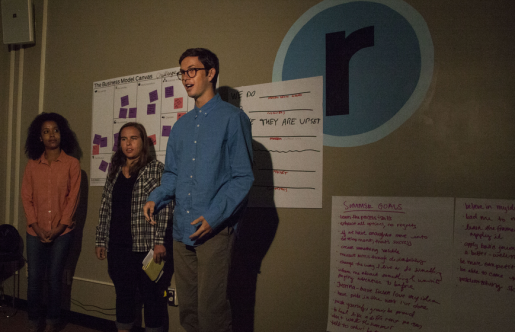 It’s amazing how interesting a project can become once you talk to the right people. When I was placed on the team tasked with creating a project that brings more transparency to the North Carolina court system, I was not excited. Courts were boring, but as I dove deeper into the project, I found an exciting and engaging project to work on.

Our team’s first meeting for the project was with the lawyers from Stevens Martin Vaughn & Tadych PLLC in Raleigh, NC. It was here that I learned about the huge problem of public records access in North Carolina and how it affects lawyers, journalists and the public. This meeting sparked my interest and got me excited about the project.

"A project has to be built on desirability, and if you’re not talking to people, then there is no way you can understand what people want."

The problem for my group and I was that none of us knew anything about courts or law. We were confused as to how we could possibly start this project without any background knowledge. But in true Reese News Lab fashion, we were thrown into the thick of things.

This has been one of the most important parts of our project so far. Each person offered us a different view of the court system and its problems. We didn’t have a solid idea of what we were creating, but these people began to show us what kind of product we wanted to create. For Reese News Lab, desirability is the most important aspect of an idea. If an idea is desirable then there will be resources to make it happen.

A project has to be built on desirability, and if you’re not talking to people, then there is no way you can understand what people want. A lot of great projects die because no one really wants them. We want to work in the opposite direction: figure out what people want and then create an idea that solves that problem. Find what type of people you’re working with and then talk to as many of those people as possible. Ask as many questions as you can, even if you don’t think it will produce a good answer. Ask people their problems, what they want to see, what they would change, what do they enjoy and how they currently do things.

John Clark, executive director of Reese News Lab, always tells us that you have to ask someone “why” five times before you get to the answer. Why do you do it this way? What makes you do it that way? Why don’t you like this way? Asking someone why in response to their answers will get you to where you want to be.

The key to the first stage of success is finding as many people as you can who will talk to you, asking them as many questions as you can, and then figuring out what they truly want. If you can figure out what people want, you can make something worthwhile and useful.

Jonathan Morris is an intern at the Reese News Lab.

This story originally appeared on the Reese News Lab. Reese News Lab is an experimental news and research project based at the School of Journalism and Mass Communication at the University of North Carolina at Chapel Hill. The lab was established in 2010 with a gift from the estate of journalism school alum Reese Felts. The Lab develops and tests new ideas for the media industry in the form of a “pre-startup.” Teams of students research ideas for media products by answering three questions: Can it be done? Does anyone actually need this? Could it sustain itself financially? To answer these questions, students create prototypes, interview and survey potential customers, and develop business strategies for their products. Students document their recommendations on whether they believe a product will work and then present their ideas to the public.