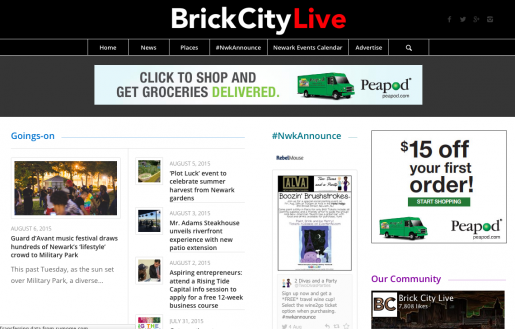 New research, from Rutgers University, suggests that New Jersey residents, including those in the Brick City, should have better access to information about their communities. Image of Brick City Live.

This piece was co-written by Molly de Aguiar.

"Together with people across New Jersey we are trying to rebuild local journalism networks and newsrooms that are rooted in and responsive to the communities they serve."

New research, from Rutgers University, being released today, explores the health of the local news ecosystem in three diverse New Jersey cities. The study suggests that there is more work to do to ensure all residents of New Jersey have access to the information they need about their communities.

“If journalism and access to information are pillars of self government then these findings suggest those tools of democracy are not being distributed evenly, and that should be cause for concern,” said Prof. Philip Napoli, the study’s lead author. The report was co-authored by Sarah Stonbely, Kathleen McCollough, and Bryce Renninger.

“These findings potentially point to specific types of problems in local journalism,” write the study’s authors, “in which lower- income communities are dramatically underserved relative to wealthier communities.”

A New Way to Measure The Health of Local News

Although the study, which was funded by the Democracy Fund, Geraldine R. Dodge Foundation, and Knight Foundation, only covers three cities, the findings are revealing about information disparities between lower-income and wealthier communities. The results are troubling. You can’t look at the research and not wonder how this inequality and lack of access to information impacts people’s lives.

Prof. Napoli’s study is a step toward documenting and diagnosing the impact of New Jersey’s changing media landscape and a call to action for those of us who care about supporting engaged and informed communities. In the course of this research Prof. Napoli and his team created a new methodology for assessing the health of local media ecosystems that can be replicated across the country. This, in and of itself is a great contribution to the debates about the shifting landscape of local news.

Working With Communities to Close the Journalism Gap

Despite the loss we feel in our communities as newspapers have folded and journalists have been laid off, there are many reasons to feel optimistic about the future. In these three cities and across New Jersey there are people who are reinventing local news to reflect the kind of information and connections we crave.

Newark, New Brunswick and Morristown were chosen for this study because of their diverse economic and cultural demographics. However, each of these cities are also home to new independent community newsrooms that are part of the Geraldine R. Dodge Foundation’s journalism sustainability project, which is also supported by the Knight Foundation.

We are working with Brick City Live in Newark, New Brunswick Today in New Brunswick and Morristown Green in Morristown – as well as journalists and residents in other cities across New Jersey – on a series of creative experiments in community engagement and revenue development with hopes of finding ways to expand access to sustainable, trustworthy news and information for all people. The journalists who run this small community newsrooms work tirelessly to serve their communities.

We’ve long known that our media ecosystem in New Jersey and across the country suffers from news deserts and information gaps. In 2009 the Knight Commission on the Information Needs of Communities found that “anyone caught on the wrong side of these […] gaps runs a significant risk of being relegated to second-class citizenship.” The Commission wrote that we face a growing gulf between “the information haves and have-nots,” and this threatens “to create a two-tiered society with limited democratic possibilities for too many individuals and communities.”

The research released today helps us understand those gaps with more clarity than ever before. These gaps are not simple in their cause or their impact. They structural, cultural and political and need to be addressed at many levels. But, what we are learning through our journalism sustainability work is that many of the solutions to closing these gaps exist in the creativity, passion and expertise of the local communities themselves. Together with people across New Jersey we are trying to rebuild local journalism networks and newsrooms that are rooted in and responsive to the communities they serve.