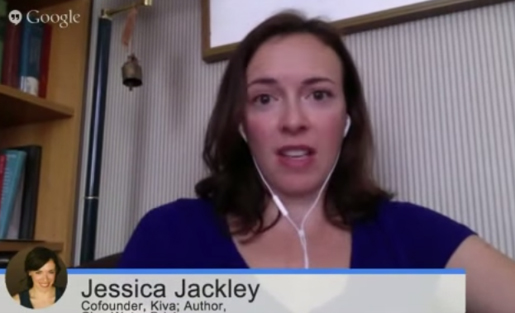 Kiva has been a star in online micro-finance for the past 10 years, and co-founder Jessica Jackley was a driving force that led to more than $744 million in micro-loans around the world, with an astounding 98% repayment rate. After leaving, Jackley went on to found the pioneering crowd-financing site for entrepreneurs, ProFounder, which was ahead of its time. Recently, Jackley recounted those efforts in the memoir, “Clay Water Brick,” an inspirational and instructional book for entrepreneurs around the world. But can micro-finance and crowdfunding work in journalism and media, where business models are in flux? We’ve seen a lot of crowdfunding in journalism, from TV shows to magazines to podcasts, such as the Radiotopia network. And there have been smaller efforts such as Spot.us, with direct payments to journalists, and more recently at Beacon Reader, which charges monthly subscriptions to back projects on the site, often with matching funds. As advertising dollars continue to shift toward social platforms, will crowdfunded journalism provide a way forward? We ask our guests Jessica Jackley, co-founder of Kiva and author of “Clay Water Brick”; David Cohn, founder of Spot.us and executive producer of AJ+; Dan Fletcher, co-founder of the Beacon Reader; and Khari Johnson, creator of Through the Cracks. MediaShift’s Mark Glaser will host, with Jefferson Yen producing.

David Cohn is an Executive Producer at AJ+, leading their mobile and social operation. He has written for Wired, Seed, Columbia Journalism Review and The New York Times among other publications. His career has focused on changing the process of journalism, making it more transparent, participatory and digital.

Jessica Jackley is an entrepreneur focused on financial inclusion, the sharing economy, and social justice. She is best known as a cofounder of Kiva, the world’s first and largest p2p microlending website. She is also a cofounder of ProFounder, a pioneering crowdfunding platform for U.S. entrepreneurs, and Kin & Co. consulting group, helping organizations support women and working families.

Khari Johnson is the creator of  Through the Cracks: Crowdfunding in Journalism, a a news website devoted to coverage of innovation, storytelling and news startups made possible by crowdfunding. Khari is a journalist with a background in local news who is fascinated by financial tech, social enterprise and the sharing economy. A practitioner and student of entrepreneurial journalism, Khari has built or helped build news startups for the past decade.

One of micro-finance’s features is the increased buying power in third-world countries. You could help create a business with just your pocket change. But unless you’re Jeff Bezos, your pocket change is unlikely to put a dent in a journalist’s budget. Here’s another problem with the micro-finance model: Unless it was wildly successful, a product is unlikely to generate enough revenue to pay back lenders. If you’re a one-person shop you might want to consider your Kickstarter’s incentive structure. Roman Mars’ unprecedented first campaign also brought along numerous logistical headaches. You don’t want the mailing of tchotchkes to overshadow the mission at hand.

Kickstarter isn’t the only way you can contribute to funding journalism. You can find projects to support on Indiegogo or Patreon. The Beacon Reader was created in 2013 as a means to leverage the popularity of individual journalists. Back in 2008, David Cohn created Spot.us, a non-profit, a crowdfunding platform specifically for journalism. The non-profit was shuttered a year after being acquired by American Public Media. APM’s Joellen Easton provided some insights on why Spot.us’ failed. One of the key statistics was that journalism crowdfunding is a very small percentage of the overall market, accounting for only 0.13 percent of the total raised in crowdfunding in 2013.

What lessons can the media world learn from Kiva and micro-financing? Is crowd-financing a better option for small independent outlets or should they consider being non-profits? How can journalism evolve with direct support from its audience?