The Power of Citizen Journalists in Remote, Underserved African Communities 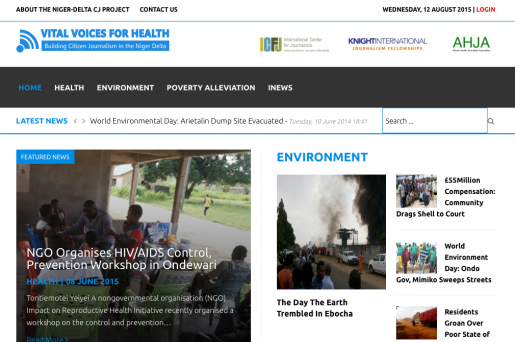 International Center for Journalists built a network of citizen journalists under the Vital Voices for Health project.

What options are available to backwater communities that want to attract government attention or media interest? In Nigeria’s Niger Delta region, some members of such communities were eager to tell their stories about health challenges, environmental degradation and poor infrastructure. But they lacked the skills to do so.

"With their knowledge of local issues and the training to spot and develop a good story, these citizens can also be a valuable resource for urban-based media houses looking to expand their coverage."

Their break came when the International Center for Journalists (ICFJ) built a network of citizen journalists under the Vital Voices for Health project, which trained 60 members of these communities to report issues that affect them.

Drawn from diverse backgrounds and with varying academic qualifications, the citizen journalists had little or no knowledge of how to report issues in their communities, which are often neglected or under-reported in the mainstream media.

These citizens, some from remote villages with poor telecommunications, came to their first training sessions with long lists of community problems they wanted to highlight.

The training sessions covered the basics of news reporting and ethics, and each participant got a smart phone along with training on how to use it for reporting. Here are three tips shared during the trainings:

Several trainings later, many of the participants were able to write stories about living conditions in their communities, including polluted water resources, bad roads and poorly equipped health clinics.

The Power of Citizen Journalists

Their subsequent stories demonstrated what is possible when citizens are equipped with basic reporting skills. The reports shed light on the state of health facilities and on attitudes toward health and environmental issues. They also pointed out cases of community activism and self-help.

Fyneface Dumnamene Fyneface of Port Harcourt covered a story about a community with no health facilities, which appeared in the national daily newspaper, Vanguard. Fyneface said the story had “far-reaching impacts that I could never imagine.”

Fyneface’s story about a community with no health facilities appeared in the national daily newspaper, Vanguard.

Elder Dandy Mgbenwa of Okwuzu in Rivers State covered a story on immunization practices in women, and notes that it’s now a part of many women’s daily routines. “There is also an overall increase in the number of children who are now immunized, according to records made available by local health centers around.”

Falokun Success Desayo of Akure, the capital of Ondo State, reported on a buildup of plastic waste in a waterway that blocked a bridge and caused flooding. The story garnered the attention of Nigeria’s Ministry of Environment, which now checks on the bridge to make sure it’s free from blockage.

These are examples of what citizens in remote or underserved communities can achieve when they gain the skills to report on their communities and attract the attention of decision makers who can address local problems. With their knowledge of local issues and the training to spot and develop a good story, these citizens can also be a valuable resource for urban-based media houses looking to expand their coverage.

Babatunde Akpeji is a Knight International Journalism Fellow building a network of citizen journalists to cover health in Nigeria’s Delta region, an area rich in resources but wracked by severe poverty.