How Bottlenecks at Journalism Schools Stretch Degrees to 6 Years 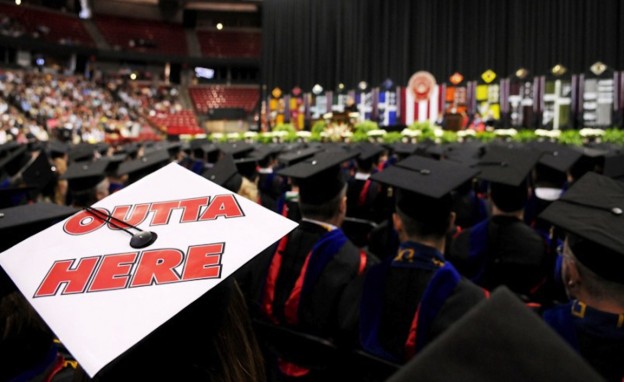 At a glance, journalism schools typically have a standard 4-year graduation rate, but problems with advising and course management can extend that time to graduation. Photo courtesy of The Badger Herald.

Rocha will start his ninth undergraduate semester in fall – he calls it a victory lap as a fifth-year super senior. Almost all of Rocha’s journalism-school friends graduated in May. He could have too – maybe even in three years, he said. Instead he tried other classes, dabbled in the business school, took some seminars.

“We will either have to get more competitive, or those classes will fill and we won’t be able to get students out on time.” -Robert Schwoch

Now, he plans to wrap up his bachelors degree with some general education requirements while reporting full time for WisBusiness.com.

The average time to graduation at the UW-Madison School of Journalism and Mass Communication is 3.9 years. Those who take longer do so of their own accord, pick up an extra major or want to explore more classes, SJMC Undergraduate Adviser Robert Schwoch said.

This fall, University of Nevada, Las Vegas journalism student Danny Webster will also begin his ninth semester. He hopes to graduate in December.

However, graduation rates at UNLV tell a different story – the journalism school’s six-year graduation rate for students who started the program in 2008 is just 31.8 percent.

“I expected to graduate in five or six years,” Webster said. “I just thought it would take a while.”

Webster enrolled in UNLV in 2011 and has been a full-time student throughout his college career.

“There is no reason that it should take six years for someone to complete a journalism degree,” said Don Heider, dean of the communication school at Loyola University Chicago.

The rationale: journalism isn’t a technical degree like engineering or nursing, Heider said.

An external review of the UNLV Hank Greenspun School of Journalism and Media Studies made open to public in July attributed the program’s extended time to graduation to a lack of direction, a misappropriation of resources and a disjointed advising system.

“The SJMS, especially its chair, seems to lack an understanding of the key metrics related to enrollment, retention, graduation and budget,” the report said.

The chair, UNLV’s journalism program Director Lawrence Mullen is matter-of-fact about the problem: the report wasn’t news to him and the solutions are simple.

“It’s easy,” Mullen said. “All you have to do is raise the caps, put more students in more seats in more classrooms.”

If the classroom is too small, you find a bigger classroom, he said.

How programs “just do it”

Journalism programs are not standardized.

Northwestern University’s Medill School of Journalism includes a residency for students to spend a quarter as a full-time reporter or public relations specialist. UNLV and Loyola University Chicago require an internship component as part of the degree. UW-Madison’s journalism school is competitive admission, meaning students apply to the major. The list goes on.

Universities mix and match different systems to make it work, but almost every program director will say the students, meeting their demands and getting them graduated on time, are the first priority.

If Mullen is right, and getting students out of school on time is as easy as just putting them in the classroom, the first step is planning around enrollment.

Alan Stavitsky, dean of University of Nevada, Reno’s Reynolds School of Journalism, runs a rapidly growing program with surges in enrollment. Compared to UNLV, Stavitsky said UNR’s graduation rates have been a non-issue, but he is aware of the risk.

“The university has grown considerably,” Stavitsky said. “When you have that strong demand, those bottlenecks are common.”

Open admission programs, like at UNLV, UNR and Loyola, have the months between registration and the first day of term to manage courses and waitlists. They have “some idea” of how many people are enrolling, Heider said, but planning requires prioritizing the problem areas.

“What is crucial is managing those gateway courses … those potential bottlenecks,” Heider said. “Even when you don’t have full-time faculty, you often have adjuncts.”

With competitive admission, faculty and staff at UW-Madison are lucky. They can plan resources from the time a cohort is accepted to the time they graduate, Schwoch said.

“We know exactly how many students are coming, exactly when they come and we plan for exactly that many spots,” Schwoch said. “Not, oh all of a sudden this year we have 500 more majors than we expected and next year we have 100 less.”

They look at demand, what each cohort is interested in – currently the school is approximately 70 percent strategic communication-oriented and 30 percent reporting-focused – and calibrate accordingly, Schwoch said.

Every course has an ideal class size, based on curriculum. If there is more demand it is up to the professor’s discretion to take on the additional load. Almost every class has at least one or two more students than the ideal size, Schwoch said.

For students like Webster that means hoping to get off the waitlist.

Due to limited resources, subject matter and availability of technology, some courses have less class size flexibility than others. Screenshot of UW-Madison’s enrollment system.

Getting students on the right path

UNLV’s journalism program is 120 credits. Full time students must be enrolled in at least 12 credits per semester.

Do the math, Webster said, and if there is any confusion, or students go off course, the program can easily take more than four years.

In a perfect world, curriculum wouldn’t be focused on graduation rates but planned to help students figure out what they are interested in, Heider said.

“Part of it is the goal because we don’t want students to be paying tuition,” Heider said. “But students should be able to change their minds.”

Loyola has designed its curriculum so students are exposed to different parts of the industry early on, Heider said. That way they can make “better rational decisions” and graduate on time.

Webster wants to be a full-time print reporter.

In his four years at UNLV, he has taken more classes in broadcast and theory than in writing. When it comes to advising, it is too much a hassle and not a lot of help, Webster said.

“I don’t feel like there is a set focus to what students want to do – that is where the students disconnect with the school,” Webster said. “[Advisers] really don’t prepare you.”

Advising is important for retention and graduation “so that students are taking the right classes, making good progress and getting connected with their major,” Stavitsky said. But it isn’t the end-all-be-all.

With a “simple” curriculum, Schwoch said, getting students in the right classes “doesn’t take much advising.” He is the only academic adviser for a nearly 600-student program.

Keeping up with less

Like Mullen, UNLV Advising Director Rimi Marwah knows there are problems. The external review was quick to point to a lack of advisers as a key factor in low graduation rates.

From 2010-12, UNLV’s journalism school had between 45 and 55 students per cohort. Part of the larger Greenspun College of Urban Affairs, two full-time advisers oversee 2,500 students.

Much of this problem isn’t unique to UNLV; public schools around the country are struggling with dwindling budgets.

“Our community, our school has been through  the national budget crisis and state budget cuts,” Marwah said.

They are trying to rebuild, hiring another adviser this summer, Marwah said.

UW-Madison’s journalism program has competitive admission for this exact reason: they don’t have enough resources to take everyone that wants to major in journalism, Schwoch said.

The UW-Madison program just lost three journalism professors to other schools. In the next two years the university will absorb $23 million in state budget cuts and the school is not allowed to replace the professors or hire adjunct professors.

It can feel like the university is so strapped for cash, keeping students in school for their tuition is the only way to keep programs going, Webster said. “The perception of college is all they want is the money,” Webster said.

But for faculty and staff, it is a different balance.

“We will either have to get more competitive, or those classes will fill and we won’t be able to get students out on time,” Schwoch said. “But we will see where that goes with future budget cuts.”

Tara Golshan is reporting for the Wisconsin Center for Investigative Journalism in Madison, Wisconsin. She is a recent graduate of University of Wisconsin-Madison where she served as the editor in chief of The Badger Herald. Follow her on Twitter @t_golshan.