Diversity in the Newsroom Isn’t Just a Numbers Game: It’s About Changing the Culture 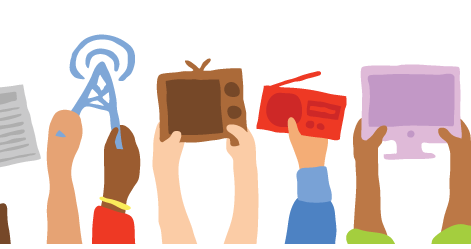 Illustration by Free Press, used via creative commons Skin In The Game

Creating more diverse journalism can’t just be about slotting people of color into the newsrooms we have, it has to be about transforming our institutions, our culture, and our storytelling. I’ve written before about the need for newsrooms to better reflect the diversity of their communities. This work isn’t tangential to creating more sustainable, impactful and engaged journalism, it is central to it.

You may have seen the headline this week over at the Columbia Journalism Review: “At many local newspapers, there are no reporters of color.” The piece is a follow-up to an earlier article where Alex William examined how unequal hiring practices, not the number of qualified candidates, contribute to lack of diversity in America’s newsrooms. While the Columbia Journalism Review piece focuses on local newsrooms, the International Business Times reported on the percentage of people of color working at the biggest new digital media outlets, concluding that most lag behind legacy media.

"Creating more diverse journalism can’t just be about slotting people of color into the newsrooms we have, it has to be about transforming our institutions, our culture, and our storytelling in ways large and small."

Chart by Alex William and the Columbia Journalism Review.

But those two pieces don’t give us the full picture. A few days after the CJR and IBT articles were published, Gene Demby at NPR’s Code Switch blog wrote about what it is like to be a black reporter covering violence against black communities. His post should be mandatory reading.

Demby points out that calls for newsroom diversity often focus on how “pulling in reporters who look at the world through different sets of lenses and bring differently textured sets of experiences to the table [can] lead to better journalism.” But Demby asks, “if ‘diverse’ reporters help newsrooms do better journalism, are newsrooms doing enough to make sure someone like Trymaine [Lee of MSNBC] has the support and backup he needs to not burn out or even break down in the process?”

Diversity isn’t just a numbers game. I repeat: Creating more diverse journalism can’t just be about slotting people of color into the newsrooms we have, it has to be about transforming our institutions, our culture, and our storytelling in ways large and small. Demby wrote earlier this summer about the impact of being the only person of color in professional settings like a newsroom.

“It turns out that being The Only One isn’t simply burdensome and annoying on an individual level,” he wrote. “There’s evidence that when people feel like they’re The Only One in a group, even a group that professes to care about diversity in its ranks, it actually gets in the way of everything said diversity was supposed to achieve in the first place.”

Screenshot from Poynter’s interactive on media diversity. Data from ASNE.

At the Heart of What Journalism Is and What It Does

While I have focused for the most part on media diversity as an issue within newsrooms, it of course, has bearing outside the newsroom, on the communities we cover and serve. I spent years working on media diversity issues with Free Press, and traveling around the country I heard from community leaders and local residents about how rarely they felt like they saw their lives and their voices reflected in the news.

A recent report from the Pew Research Center described race and ethnicity as “one of the greatest divides in news habits.” In their study, people of color followed the news more than white residents, but were largely dissatisfied with the coverage they received. This is reinforced by research from the American Press Institute that found “African Americans and Hispanics are concerned with the accessibility of news about their communities and the portrayal of their communities by the media.”

This issue gets at the heart of what journalism is and what it does. It is about telling the full truth of a story. It is about accuracy. It is about ethics. The Society of Professional Journalists’ code of ethics includes, “Boldly tell the story of the diversity and magnitude of the human experience. Seek sources whose voices we seldom hear.” Too often, we are not living up to that promise.

“Boldly tell the story of the diversity and magnitude of the human experience. Seek sources whose voices we seldom hear.” — SPJ Code of Ethics

Skin in the Game

How are newsrooms responding? At Poynter Lauren Klinger profiled how Feministing has taken an intentional approach to fostering media diversity across their organization. The piece touches on a number of the themes discussed above. Poynter also recently reported on how the NPR Visuals team is “trying to reduce the effects of privilege” in the hiring of interns. From sharing interview questions in advance to letting people revise their cover letters, the team wants to level the playing field, recognizing that different people have access to different coaching and job prep networks. ProPublica recently published their newsroom demographics and outlined what they planned to do to foster more diversity in their newsroom but also the field in general.

There is more to say on this topic. I haven’t even touched on gender equity and the recent report on women in the media from the Women’s Media Center.

I want to end with another quote from Demby’s post:

“As calls for newsroom diversity get louder and louder — and rightly so — we might do well to consider what it means that there’s an emerging, highly valued professional class of black reporters at boldface publications reporting on the shortchanging of black life in this country. They’re investigating police killings and segregated schools and racist housing policies and ballooning petty fines while their loved ones, or people who look like their loved ones, are out there living those stories. What it means — for the reporting we do, for the brands we represent, and for our own mental health — that we don’t stop being black people when we’re working as black reporters. That we quite literally have skin in the game.”

Until we can have that discussion in all our newsrooms, and move it toward meaningful action, we are not doing enough.