A Rewarding Journalism Innovation Project on the Eve of Destruction 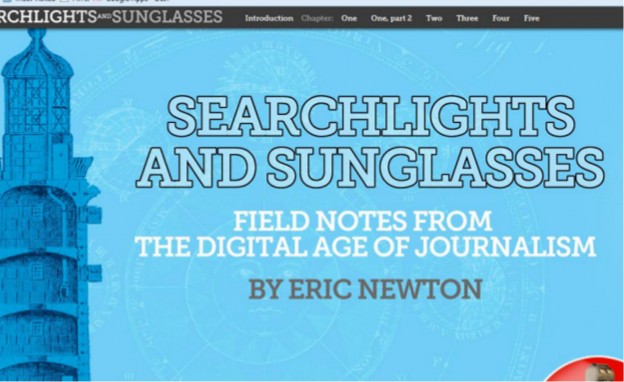 The 2015 update to Searchlights and Sunglasses continues to highlight media advances.

Our experimental project calling for faster innovation in journalism and journalism education, Searchlights and Sunglasses, is approaching its second birthday. So it’s just about time to destroy it.

I know. That sounds ridiculous. Something does well, so you blow it up. Welcome to change in the digital age.

"Every year more journalism school leaders say that the skills involved in staying up to date are important, just as needed as basic storytelling skills and having a working knowledge of civics, law, ethics, history and the physical world."

Out with comfort; in with strange

For the moment, our free digital teaching tool is safe on the Knight Foundation servers. Paige Levin, a University of Florida journalism student and recent Knight intern, just completed its latest update. She read it, fixed broken links, added some class exercises, and reported what she believes journalism students today should know. By all accounts, including hers, she learned from Searchlights. So the content still has educational value.

Searchlights and Sunglasses covered journalism education through an experimental digital approach, including a learning layer of resources and activities.

That said, most of what we hoped to learn when we launched in 2013 we have learned. Can a loosely organized team remotely create a classroom tool that’s more nimble than a printed book? Yes. (Thanks, Reynolds Institute.) Will more people read a long-form work than the 5,000 or so who read my blog posts? Yes, many times over.

Could an old newspaper editor let go of tradition and let a creative team inject surprise and humor — and even jokes about me? Yes, if we talked first. Would writing about slow change speed up change? No. Information by itself doesn’t change the world. People change it.

I learned that I had to do a better job of explaining the goal of a fully built-out teaching hospital for journalism education (an aspiration pursued by Arizona State University, where I am now the first innovation chief at Cronkite News). The idea, articulated by Dean and Vice Provost Christopher Callahan, is that a true teaching hospital teaches current practice while also testing new tools and methods.

Screen shot of Chapter One in “Searchlights and Sunglasses: Field Notes From the Digital Age of Journalism,” by Eric Newton.

Journalism education is changing, albeit faster in some places than others. Every year more journalism school leaders say that the skills involved in staying up to date are important, just as needed as basic storytelling skills and having a working knowledge of civics, law, ethics, history and the physical world. That’s another sign that Searchlights in its 2-year-old form may no longer be needed. More than just computer power doubles every two years; society’s thinking power, and capacity to change, grows as well (again, faster in some places than others).

So, how to blow up Searchlights? I was talking with Knight Foundation Editorial Director Michael Bolden and Director of Digital Strategy Alejandro de Onís the other day and a good idea popped up. How about this: Every year, completely redo the book in a new format; one year, podcast; another, a Tumblr feed; yet another, in video from 360-degree cameras or indoor drones. An ever-changing book. It’s a crazy idea, one that fills me with excitement and apprehension, which, of course, is why I love it. If you have an even crazier idea, I would love to hear it.