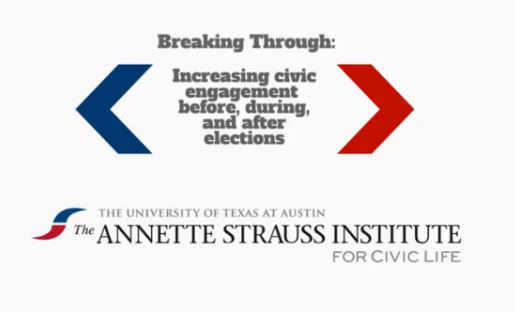 The John S. and James L. Knight Foundation recently awarded $3.2 million to 22 projects that will better inform voters and increase civic participation before, during, and after elections.

Citizens are made, not born. Attitudes, skills, information — these are all things we learn in our schools and communities and through our parents, leaders, colleagues, friends, and strangers. In this world of information overload, it can be difficult to break through the noise and reach the public to rekindle the ideals of active citizenship. So, how do we rediscover and refashion this knowledge, especially in a rapidly-changing media environment? The Knight Foundation might just have a few potential solutions, thanks to its latest Knight News Challenge on Elections.

"Focusing on the critical area of elections, the winners explore new ways to use data and technology to enable citizens to determine their own best interests." -John Bracken

The Knight Foundation’s John Bracken, vice president of the Media Innovation Program, and Chris Barr, director of media innovation, announced the winners Thursday at the one-day conference, “Break Through,” hosted by the Annette Strauss Institute for Civic Life at the University of Texas at Austin’s Moody College of Communication.

The latest question asked by the Knight News Challenge. Image from the Knight Foundation.

As supervisor of the Knight News Challenge, Bracken introduced the ten projects receiving ‘scaled funding,’ or grants between $200,000 and $525,000 each. Major news organizations, small civic startups, the public sector, and government entities all received funding for ideas ranging from new ways to bring more transparency to campaign financing to enlisting barbershops to spread information on candidates and issues.

“Focusing on the critical area of elections, the winners explore new ways to use data and technology to enable citizens to determine their own best interests,” Bracken said in a press release.

Barr, who runs the Prototype Fund, then announced the twelve winners of the $35,000 Prototype grants, which rapidly develop early-stage media and information ideas. With these grants, the Knight Foundation provides funding to new and emerging ideas for a short period of time, six months, during which grantees quickly test their key assumptions to see if they are on the right path.

“The winning projects offer the opportunity to advance journalism innovation, while helping to ensure voters have the information they need to make decisions at the polls and become more involved and engaged in the issues that affect their communities,” Jennifer Preston, Knight’s vice president for journalism, said in a press release.

Like the conference, the Knight News Challenge on Elections explores ways to move citizens from bystanders to active participants in the democratic process. From technologists and journalists to civic leaders and public officials, the grantees seek to get all people involved in shaping their communities and participating in the political process.

Knight News Challenges winners explained their projects to conference attendees in a series of lightning talks following the announcement. Roger Macdonald and Tracey Jaquith, of Internet Archive, received $200,000 for their 2016 Political Ad Tracker, which hopes to bring accountability to the voting process. Piloted in Philadelphia last year, the Ad Tracker will be an invitation to collaborate. As Macdonald explained, the project will create a public library of television news and political ads from key 2016 primary election states. They will then enhance this library through non-partisan fact-checking and additional analysis from PolitiFact, Factcheck.org, and others.

During election cycles, citizens witness an enormous amount of political messaging. In fact, as Macdonald predicts, the amount in 2016 will be twice as much as it was four years ago. The problem isn’t the messaging itself; it’s the lack of context surrounding this messaging, according to Macdonald.

“It’s time to give people real information they need to make sound choices,” he said.

The Knight Foundation has already announced the next round of the News Challenge, which will focus on data. Below is the full list of this round’s Knight News Challenge winners, including the 12 projects receiving funding through the Prototype Fund.

2016 Political Ad Tracker by Internet Archive | $200,000 | Project leads: Roger Macdonald, and Tracey Jaquith; San Francisco: Bringing accountability to the voting process by creating a public library of TV news and political advertising from key 2016 primary election states, paired with nonpartisan fact-checking and additional analysis from PolitiFact, the University of Pennsylvania’s FactCheck.org, The Center for Public Integrity and others.

Inside the 990 Treasure Trove by The Center for Responsive Politics in partnership with GuideStar | $525,000 | Project lead: Robert Maguire; Washington, D.C.: Helping voters and journalists better understand who is funding campaigns by partnering with GuideStar to unearth more comprehensive data on the sources of so-called “dark money.”

Revive My Vote by Marshall-Wythe Law Foundation | $230,000 | Project leads: Mark Listes and Rebecca Green; Richmond, Va.: Helping Virginians with prior felony convictions restore their voting rights by organizing local law students to help remotely process rights restoration applications and lessening wait times for those who have applied; an outreach platform will also be developed to motivate and inform prospective applicants.

Judge Your Judges by WNYC | Project leads: Kat Aaron (@kataaron) and John Keefe (@WNYC, @jkeefe); New York: Enabling people to make more knowledgeable decisions about judicial elections through a tool that will provide key information, insights and context about candidates, their views and the court system.

Tabs on Tallahassee by the Orlando Sentinel | Project leads: Charles Minshew (@CharlesMinshew) and Andrew Gibson (@AndrewGibson27); Orlando, Fla.: Fostering government transparency by creating a searchable database of the voting records of Florida lawmakers for newsrooms across the state.

Up for Debate Ohio! by the Jefferson Center | Project lead: Kyle Bozentko (@JeffersonCtr); Akron, Ohio: Increasing political knowledge in Ohio through community deliberation, online engagement and the media to provide citizens the opportunity to discuss issues and campaigns thoughtfully and civilly.

Accessible Voting for Everyone by University of Florida | Project lead: Juan Gilbert (@DrJuanGilbert, @FloridaEngineer); Gainesville, Fla.: Making voting easy and accessible to all through an open source electronic voting system that allows citizens, including those with disabilities, to cast ballots by actions such as tapping a touchscreen or speaking into a microphone.

Erase the Line by D.C. Board of Elections | Project lead: Margarita Mikhaylova (@dcboee); Washington, D.C: Helping election officials improve the voting process by creating a digital platform that will document wait-time information at polling places across the nation.

Rhode Island Civic Fellowship by Rhode Island Secretary of State | Project lead: Secretary of State Nellie Gorbea (@RISecState); Providence, R.I.: Encouraging more millennials to vote through a statewide civic fellowship program designed to inspire, recruit and train them to get involved in shaping voting and elections in their communities.

The Iowa Electorate by The Des Moines Register | Project lead: Amalie Nash (@AmalieNash); Des Moines, Iowa: Engaging young voters in the Iowa caucuses by sponsoring a series of public events and initiatives that use social media to draw millennial attention to issues and candidates.