How to Make Media Innovation Work 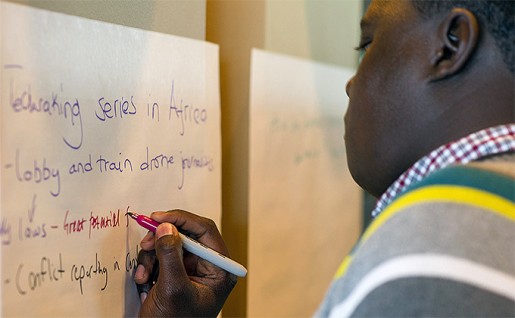 After seeing how Kenyan journalists cover flood stories, I was convinced that drones — also known as unmanned aerial vehicles (UAVs) — could be useful. Journalists could deploy them to get aerial views of what was happening on the ground instead of risking their lives using rickety boats to do their reporting.

I also thought UAVs could help journalists maintain a higher degree of editorial independence. When government agencies organize aerial tours for reporters of flooded areas, the stories end up being as much about the government’s response to the disaster as about the floods themselves. This was the starting point for the award-winning project I’m currently leading: African skyCAM.

"Newsrooms need to do a thorough audit of their physical resources, personnel and culture before introducing digital platforms."

Since then, we’ve done several projects showcasing how reporters can use UAVs, including covering a political rally and developing a 3D interactive model of a huge trash dump in Nairobi. The project’s success can largely be attributed to its small, dedicated team and our successful access to funding. But it was also essential we had the creative freedom to make the case for using UAVs in a journalism context.

Based on this experience with African skyCAM and other media innovation projects, like the development of a citizen journalism app at the Kenyan newspaper The Star, I’ve put together a list of some key issues that can help make innovation work.

1. Think about your strategy

In my experience, although many newsrooms have adopted a “digital first” approach, it’s really more a slogan than a clearly thought-out strategy. Digital platform developments are mostly driven by replication, not by solid research and a sustainability plan. This lack of planning leads inevitably to one thing: failure.

Most newsrooms have integrated digital platforms while continuing their old ways of doing things. But trying to operate new platforms within the same bureaucracy, timelines and entrenched newsroom culture isn’t going to help them meet ambitious targets. Newsrooms need to do a thorough audit of their physical resources, personnel and culture before introducing digital platforms. They need to get staff on board through training. In addition, really selling the vision is key.

2. Work with good tech experts and realize they have their price

Another crucial element often overlooked in digital media projects is tech staff. In Kenya, newsrooms have mostly hired external technical experts to develop tools to improve workflows, distribute content and improve user engagement. However, the working relationship between editors and developers is rarely smooth. With a skill-set that’s still very much in demand and therefore expensive, most tech experts prefer short-term contracts rather than being tied to a newsroom. That’s why most projects are delayed or even fail. I’m a big advocate of hiring in-house developers; they’re worth the investment.

The Red Cross in Kenya runs a chain of hotels to raise money for its humanitarian work. Why can’t media outlets do the same? At DW Akademie’s recent South2South event in Cape Town, one thing that stood out for me was that all the participants came from countries where the political environments are hostile to media freedom. It was really enlightening to find out how the media navigated these treacherous environments.

Guatemala’s Plaza Pública receives the majority of its funding from a university, which frees it from a dependency on government advertising. Therefore, its reporting can be independent. This model challenges the media to look into nontraditional options for funding research and development.

Guatemala’s Plaza Pública receives the majority of its funding from a university.

In India, Shubhransu Choudhary, who founded CGNet Swara, has created a type of community radio on mobile phones, which he says, has “democratized the news space.” By allowing listeners to both record and listen to reports using their mobiles, the initiative bypasses the government’s ban on private and community radio stations broadcasting news. The project is a model for content distribution. Such interactive voice response infrastructure is still largely untapped and could provide a viable monetization option through advertising or user subscriptions.

Media development projects should focus more on capacity building rather than product-based funding. It’s become a trend for some funders to throw money at prototypes without really looking at their viability and the skill-set required to develop and sustain them.

Therefore, mentorship and skill building are key. The commitment to funding projects should be the beginning, not the end of engagement. Journalists (and their managers) who receive funding also have to get creative. They need to understand their markets and adopt digital solutions — not because they’re trendy but because they make editorial and business sense. With the digital revolution just beginning in many countries in the Global South, media organizations now have the time and opportunity to innovate and modernize their operations so that they meet news consumers’ needs.

5. Keep an eye on regulatory issues

In the Global South, societies and governments are just beginning to look closely at the dos and don’ts of the emerging digital media landscape. This may turn digital innovators into digital activists. My own project, African skyCAM, is now being threatened by new government regulations in Kenya that restrict the civil operation of drones. This kind of blanket ban kills innovation but also opens up an opportunity. I’m currently laying the foundation for an African drone journalism association to advocate for the use of drones in newsgathering and to provide training.

Dickens Olewe (@DickensOlewe) is a Kenyan journalist and 2015 John S. Knight journalism fellow at Stanford University. He’s also the founder of AfricanSkyCAM, a drone journalism project which was one of the winners of the inaugural African News Innovation Challenge in 2012.