How Kids Are Learning Math, Maps and Spatial Justice in NYC 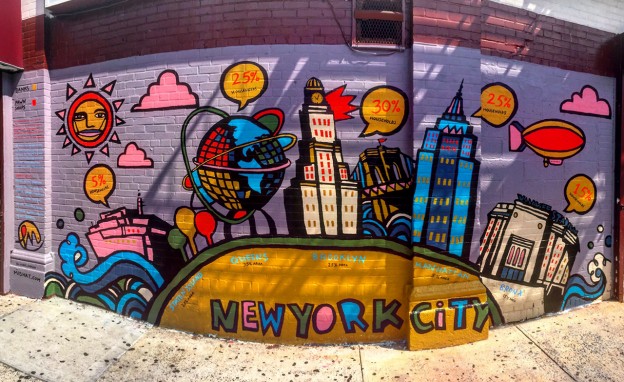 “This is where customers find fast cash, and sometimes … lose their minds. You won’t believe what’s in store.” – truTV’s Hardcore Pawn

"I know what they doin’. I could probably calculate it for myself and then tell them what I owe them instead of them tellin’ me what I owe them.” - Student from Essex Street Academy

The myriad of reality television shows about pawnshops — from Hardcore Pawn to Combat Pawn to Pawn Stars — is an indicator of an uptick in interest in alternative financial institutions (AFIs). Perhaps the interest is a matter of mystique about what actually transpires in a pawnshop, or rubbernecking the desperation of those in need. Or perhaps the interest reflects the increasing ubiquity of AFI’s across the United States.

Pawnshops offer collateral loan services and charge simple monthly interest, capped at 4 percent in New York (our home state) but as high as 25 percent in Mississippi and Alabama. Once related and required fees are factored in, pawnshop loans, even in New York, are considerably more expensive than traditional bank loans. The geographic distribution of AFIs skews toward low-income areas where residents need quick loans in small amounts to cover necessities. This produces a predatory system that charges residents with the most needs the highest rates.

Jewelry on offer in a pawnshop. Photo by Laurie Rubel.

Learning Mathematics of the City in the City was funded by the National Science Foundation in 2012. The project aims to give local relevance to mathematics learning and open a window for students to use mathematics to understand socioeconomic issues in their city. Led by the City University of New York’s Brooklyn College, in collaboration with Sarah Williams of MIT’s Civic Data Design Lab, the project designed a mathematics education module that focuses on financial institutions in New York City for use in local high schools.

How does a pawnshop loan work? How can you use mathematics to model a loan and compare across different loan options? Where are pawnshops, other AFIs, and banks located in your city, with what patterns? What are strategies to compare neighborhoods’ financial resources? High school youth and mathematics teachers from three NYC public schools in low-income neighborhoods investigated these questions in their work with this module, known as Cash City.

Cash City presents a web-based map that invites readers to analyze the distribution of financial institutions across New York City. The map pinpoints locations of banks and AFIs by category:

It can be shaded according to various Census variables to reveal underlying patterns:

The map normalizes the numbers of financial institutions in various ways, allowing readers to compare, for example, pawnshops per square mile, in different neighborhoods across the city:

As part of the 10-day module, students took to the streets in groups to conduct field research and visited pawnshops, other AFIs and banks. Using mobile phones or cellular-enabled tablets, students recorded photographs, audio interviews, and notes. Media was instantly archived and geolocated on the maps using a custom web-based tool designed by MIT’s Civic Data Design Lab.

The theme of spatial justice generated student interest in mastering concepts like percent to understand interest rates. Students expressed that by learning math in this way, they could connect to the “real-life” aspects of the module. They also enjoyed talking with people in the field research, and these aspects made the module more interesting than regular mathematics class — “because you actually could get to see things.” Some students highlighted a feeling that this was something that they really needed to pursue.

Lauren Shookhoff, one of the collaborating teachers, explained how this media tool allowed her students to curate their own stories about their neighborhoods. She said, “Students photographed banks and bodegas, pawnshops and people as directed and also chose to document murals, subway stations, churches, people walking their dogs. These are stories of and from these neighborhoods.” Spanish-speaking ELL students were thrust naturally into the role of leaders in the field research because they could successfully guide their groups in interacting with pedestrians and shopkeepers in Spanish.

Local financial institutions generously hosted the visiting youth for the most part though in some cases, store managers’ unwillingness to talk with youth was painfully experienced as racism. In general, banks were more restrictive to visitors and photography than the AFIs, which perhaps reinforced an underlying misconception that AFIs are local resources and not financial predators.

Although the larger system of access to financial services may have seemed out of grasp to some in terms of being able to affect it through activism, many students expressed feelings of empowerment through Cash City. For example, one student said that by better understanding percents and interest rates, she learned to, “stop the bank in their tracks. Like, I know what they doin’. I could probably calculate it for myself and then tell them what I owe them instead of them tellin’ me what I owe them.”

Students proudly asserted that they wanted to share what they had learned, with their parents, families, and, more broadly, with other youth. In the words of one of the students, “By knowing about pawnshops and how they work, we can try to avoid being taken advantage of. We can try to make good financial decisions. But we also realize that a lot of people are in this predicament that don’t have a choice and that’s unfair.”

Maren Hall-Wieckert is a research assistant with the City University of New York.

Laurie H. Rubel is on the faculty of the City University of New York (Brooklyn College). Special thanks to the hard-working, brilliant teachers who collaborated with us on this project.  More information is at www.citydigits.org