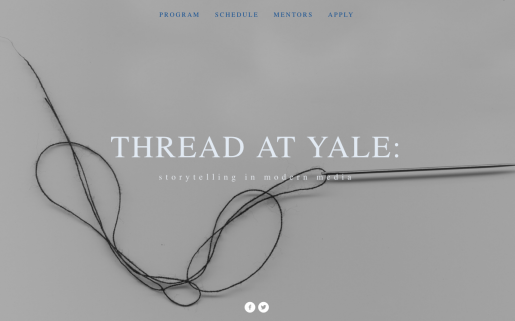 Thread at Yale was a gathering of people interested in storytelling in modern media.

Thread at Yale was billed as a gathering for people interested in “storytelling in modern media.” Or, as the website explained: “It’s not a conference, and it’s not a workshop. It’s both. Maybe it’s neither.”

Thread comes from the Yale Journalism Initiative, an ambitious program funded by Steven Brill in 2006 to try to encourage Yale students to consider a career in journalism.

"We soon discovered that storytelling is what united us, and we were able to speak as easily about a podcast as an excerpt from a documentary, with no problem transitioning to the written pieces."

For three days writers, podcasters, photographers, and videographers got together on the incredibly picturesque Yale University campus (seriously, Gilmore Girls did not do it justice) to learn how to better craft narratives with all the new technology at our disposal.

At a welcome pizza party at New Haven’s famed BAR, my fellow participants and I were a little nervous about being sorted into critique groups with members outside of our disciplines. It can already seem like a stretch for a journalist to comment on a piece from a memoir — how could the writers offer constructive criticism on the visual story tellers, and vice versa? Everyone was excited about the variety of backgrounds from the participants, whether he or she was a photographer from Senegal, a journalist from South America, or part of a group of writers and visual artists from New York.

Getting ready for Thread. Photo by Molly Horan.

The program couldn’t have kicked off with a better speaker: Glynn Washington, executive producer of of NPR show Snap Judgment. Washington’s presentation was a collection of clips from the live show illustrating what goes into truly great storytelling and his own advice on kicking off a podcast, from technical questions to tips on building an audience.

The second half of each day was devoted to the workshop, which consisted of three hours for three days to tackle 11-12 participants’ project excerpts, which we had gotten a few weeks before the start of the program. In my own group, we soon discovered that storytelling is what united us, and we were able to speak as easily about a podcast as an excerpt from a documentary, with no problem transitioning to the written pieces. Most insights came from the artist themselves prompted by other workshoppers’ questions about their piece; more than once someone declared, “That’s it, that’s your first line.”

On the second night of the program, we were welcomed to Mory’s, a bar Thread organizer Mark Oppenheimer explained had once been open exclusively to Yale alumni with a letter of recommendation. To keep a little of their traditions alive, however, a giant metal cup with a questionable concoction of alcohol was passed around and drunk by certain brave participants.

Another famed storyteller, Emily Bazelon, spoke to us about the process of writing her book, Sticks and Stones: Defeating the Culture of Bullying and Rediscovering the Power of Character and Empathy. She spoke about gaining trust with her subjects while maintaining professional distance as well as how she made her way from a small town paper to writing for Slate. The most interesting moment of the night, however, came from a participant question: how do you balance your work life with a family (the participant who posed the question was a man, and made it clear he believed the question was relevant to men and women). Bazelon spoke about sharing responsibilities with her husband as both their careers dictated, and other program mentors weighed in with their experiences as well.

The New York Times’ Snow Fall is an example of written and multimedia storytelling.

Appropriately enough, New York Times writer John Branch spoke on the last day of the conference, whose most famous piece, Snow Fall, is an example of both written and multimedia storytelling. Branch explained the work that went into crafting the six-part piece on a deadly avalanche, as well as how certain multimedia pieces were imagined and woven in, from audio clips to an interactive map of the mountain. Fielding a question about how a freelancer without the New York Times‘ resources could create such a piece, Branch acknowledged he was lucky to have a team, but pointed out that new technology was making it easier and easier for individuals to incorporate impressive multimedia add-ons to a piece.

After a last coffee break on Wednesday afternoon, participants began saying their goodbyes and departed campus to catch their trains. One participant commented that the goodbyes to new friends was just “like summer camp.” But many of us promised to stay in touch, as sounding boards for new pieces and friends who would be excited to hear news about each others creative successes.