What We Learned Building Our Student Media Startup Tellascope 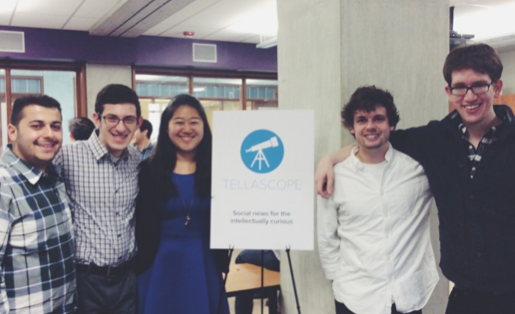 The Tellascope team launched its startup as part of an entrepreneurship class at Northwestern. Photo provided by Tellascope.

For the last four months, I’ve been working with four other students on a media startup as part of an entrepreneurship class at Northwestern. Last week, we launched Tellascope: social news for the intellectually curious.

It took us 17 weeks to come up with that tagline.

"Why would people come to our site over Google, Facebook, Twitter, The New York Times, or some other news homepage? What would distinguish us enough to inspire people to change their tried and tested news consumption habits?"

Seventeen weeks to solidify our target audience, nail down our elevator pitch, and build our Minimum Viable Product. (Ironically, we chose the name Tellascope during our first team meeting and it stuck.)

From product management to agile development to business model canvases, here are our team’s experiences and takeaways on building a media startup:

We didn’t want to create just another site that posted links on social media to articles. We don’t have the time, credibility, or resources to compete with other general interest news sites. We wanted to take a more curated approach and build something that would provide clarity and surface thought-provoking content instead of clickbait, pictures of corgis, and Kim Kardashian’s butt.

After a week, we thought we had the answer. We wanted to be Pinterest for news. We never really knew what that meant, and everyone else just nodded along in agreement with our vague idea. (I mean, it sounds like a legit startup, right?)

Even with that seemingly catchy pitch, there were still a lot of unanswered questions. Was it a platform for publishers or was it a place for any news readers? How were we any different than Pocket, Instapaper, Pinboard, or even Pinterest itself (except that we were focusing on text instead of images across the web)? Why would people come to our site over Google, Facebook, Twitter, The New York Times, or some other news homepage? What would distinguish us enough to inspire people to change their tried and tested news consumption habits?

We answered those questions by conducting numerous interviews with different types of prospective users and by making hypotheses that we later rejected or validated based on user feedback. We started by asking more open-ended questions about people’s general news habits. As we narrowed our focus, we asked more specific questions that helped pinpoint the problems Tellascope would tackle.

Learn about your users’ news habits and pain points

Once we narrowed down our target users to active millennial news consumers, our interviews consisted of more open-ended questions like “Walk me through one site you use to find content.” By actually sitting down with our customers, we were able to observe their habits and processes firsthand, thereby allowing us to find similarities and patterns in people’s behavior:

With all of these insights, we honed our product to provide the filters, social context, and curation that our users care about.

The pros and cons of not producing original content

Since we weren’t going to produce original content, we had to brainstorm ways of getting content into our site. We chose Pocket as our first content stream. As one of the most popular read-it-later services, Pocket narrows down our preliminary target audience and integrates with peoples’ existing news consumption habits.

One of our biggest challenges was the empty room effect. No one wants to be the first one to show up at the party — it’s no fun. So we needed to create some sort of initial value that did not depend on the existence of a community. We fleshed out features related to information management and seeded the site with the types of articles that support our vision for Tellascope. That way, even as we build Tellascope’s community, the platform is still useful and engaging.

Sketch, mock up, and test what you’re going to build before you build it. In the early days of Tellascope when we were exploring tags and topic pages as ways of discovering articles, we first sketched out those interactions and tested our paper prototypes with a handful of users. We quickly found that we should prioritize tagging and it saved us time and energy on irrelevant feature development.

An example of Tellascope’s paper prototyping. Photo provided by Tellascope.

With our MVP built, we’ve also started to mockup our future vision for Tellascope. It’s not only helped put our product development into perspective, but it also has given us something that we can put in front of people and receive feedback on. After all, this is just the beginning.

With so many distribution channels and opportunities to connect with our audience, it was important to build our presence beyond our own platform. Although we created a Facebook page, Twitter account, and company email, we realized we needed something more unique that allowed us to build our brand and build our relationship with our customers. We started a weekly email newsletter where we curate the best articles and comments on Tellascope. Not only has it been a great way to mirror the interaction and utility of our site before launching our private beta, but it’s also been a way for us to experiment.

For our first two newsletters, we toyed with the idea of curating articles based on their reading time (one of Tellascope’s current features). As we begin building out further search and discovery features like emotional or topic tagging (think BuzzFeed reactions), we’ve used the newsletter as a proof of concept. Like mockups, such content strategy avenues allow us to easily test, elicit feedback, and iterate.

Nicole Zhu (@nicolelzhu) is currently studying Computer Science and English at Northwestern University where she also works as a Student Fellow at the Knight Lab. She is interested in the intersection of journalism and technology and most recently worked at Vox Media on their product team.