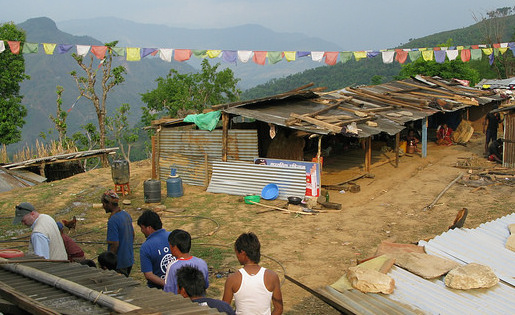 Nepal in May 2015, after the country's April 25th 7.8 magnitude earthquake. Photo by the International Organization for Migration and reused here with Creative Commons license.

The devastation caused by the earthquakes in Nepal is a reminder of the indispensable role played by relief workers, medical teams, and other key actors on the front lines. Among them are many journalists who, on the most basic level, serve as witness to those affected and share their stories with the world.

"But far too frequently journalists fall prey when they criticize and expose, and Nepal is no exception."

As Nepal wrestles to recover in the months ahead, journalists will be all the more vital as they keep a watchful eye on the state, the international community, and flow of critical resources. But far too frequently journalists fall prey when they criticize and expose, and Nepal is no exception.

A history of challenges

During my visit in late April to the capital Kathmandu, as part of the Nepal International Media Partnership — a coalition of organizations including the Committee to Protect Journalists — members of media groups and local journalists told us about the challenges they face. The coalition was hosted by the Federation of Nepali Journalists (FNJ), which represents more than 8,000 journalists and media workers in the country.

Since 1992, at least eight journalists have been killed in Nepal, seven of whom were murdered in direct relation to their work, CPJ research shows. In the cases of nine other journalists, CPJ has not been able to confirm if they were killed in direct relation to their work. In many of these cases, the killers have gone unpunished. While the number of killings has decreased in recent years, journalists continue to come under threat and many said self-censorship is widespread.

Impunity remains a major concern, though the country has made some inroads on the issue. In the week of our meetings in Nepal, a district court convicted the mastermind behind the 2009 murder of journalist Uma Singh and sentenced him to life in prison. The Uma Singh case is the first one worldwide to see full justice since 2013, when Brazil convicted a former police officer-turned-businessman for ordering the 2002 assassination of a newspaper publisher, according to CPJ research. It marks a positive step towards stemming impunity in the country, but it is an exception, not the norm.

Dealing with impunity was part of the focus of the week-long trip to Nepal, the coalition’s eighth visit to the country in the past decade. Plans to improve conditions for the press however, will likely be put on hold while Nepal works on relief efforts and dealing with the aftermath of the earthquakes which, according to reports, killed at least 8,000 people and left more than 250,000 homeless.

Members of the Nepal International Media Partnership and Federation of Nepali Journalists during a trip in April to discuss challenges for the press. (Shaligram Tiwari/FNJ)

A future mechanism to protect journalists?

During the trip, the coalition discussed the creation of a specialized mechanism that would help protect journalists, human rights defenders, and others under attack for exercising their right to freedom of expression, as well as help stem impunity. The coalition also advocated for media-friendly policies and laws.

The protection mechanism was proposed under the UNESCO-led U.N. Plan of Action for the Safety of Journalists and the Issue of Impunity, which identified Nepal as a first-phase, or “pilot” country. Details of the proposal have yet to be finalized, but the mechanism will be overseen by Nepal’s National Human Rights Commission, and is expected to include representatives from the government, police, and FNJ, in addition to independent experts. Under the proposed mechanism, cases of journalists and human rights defenders who have been attacked would be monitored, and emergency support would be provided to journalists under threat.

With few successful examples to serve as models — Colombia offering the most established practices to draw from — Nepal finds itself in uncharted waters. A robust and efficient mechanism would have the potential to not only address concerns around journalists’ safety in Nepal, but also serve as a model for the rest of South Asia, where CPJ research shows press freedom continues to be undermined and threatened.

Before the protection mechanism can be implemented, the details of its exact purpose and how elements of it, such as the rapid emergency support, will be implemented need to be fine-tuned. The next steps will be crucial to shaping this endeavor.

In addition to working on plans for the protection mechanism, the coalition met with Information and Communications Minister Minendra Rijal, chairman of the Constituent Assembly Subhash Chandra Nembang, and members of political parties, to discuss proposed laws and policies.

Nepal has not yet finalized its Constitution, but proposed guarantees on freedom of the press and freedom of expression currently include restrictive clauses and vague language not fully in line with international standards, according to the FNJ and coalition. In addition, the coalition noted the need for broader consultation on a media policy — an issue raised during the previous mission in 2012. During that trip, it recommended such policy support and encouraged a pluralistic, inclusive media that provides a platform for democratic discourse and supports Nepal’s peace-building process.

In addition to expressing concern on these issues, the coalition called on Nepal’s government to ensure that if a law on contempt of court is adopted, it respects constitutional and international standards. A bill introduced in parliament in June 2014 proposed a wide definition of contempt and gave judges discretionary powers to initiate a case, with punishment ranging from 10,000 Nepalese rupees (approximately US $100) to a year in prison, or both, according to the FNJ.

Many officials offered broad assurances on these issues. Chin Kaji Shrestha, Chief Whip of the Nepali Congress, which represents the largest party in the Constituent Assembly, said: “If you can protect journalists, you can provide an atmosphere conducive to freedom of expression for all people.” Some party members, including Jitendra Dev, spokesman of the Madhesi Janadhikar Forum (Loktantrik) party, raised concerns about what they viewed as a politicized media environment and irresponsible journalism. “A journalist must be a journalist, not a party card holder,” Dev said. Citing the case of Edward Snowden, Bisnu Bhattarai, spokesman of the Rastriya Prajatantra Party, said “no right is absolute,” and that journalists needed to be sensitive to matters of national security.

In the aftermath of the earthquakes, the Nepal International Media Partnership will be reassessing how best to move forward with its proposals. For further details on the mission, read the coalition’s joint statement here.

Sumit Galhotra is the research associate for CPJ’s Asia program. He served as CPJ’s inaugural Steiger Fellow and has worked for CNN International, Amnesty International USA, and Human Rights Watch. He has reported from London, India, and Israel and the Occupied Territories, and specializes in human rights and South Asia.