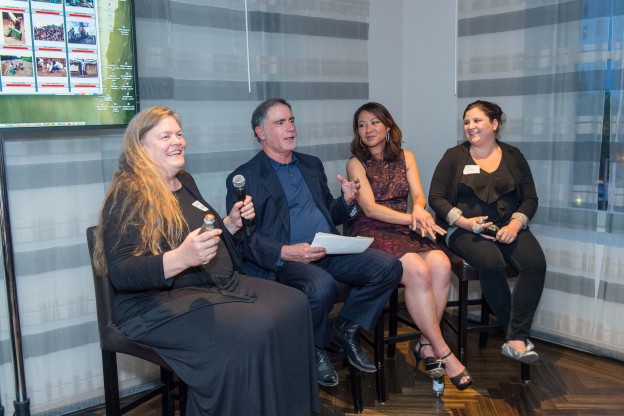 Hegranes told this to a crowd of more than 80 tech and journalism influencers who gathered at The St. Regis Hotel in San Francisco earlier this month to watch a panel discussion featuring Hegranes; Phil Bronstein, executive board chair of the Center for Investigative Journalism; Judy Walgren, director of photography for the San Francisco Chronicle; and Irene Noguchi, producer and journalist at KQED. The panel was produced by the International Women’s Media Foundation (IWMF).

"As the landscape of journalism continues to evolve, one thing will never change: the importance of keeping those who break news as safe and secure as possible."

Co-hosted by Kara Swisher, co-CEO and executive editor of Re/code; Marne Levine, COO of Instagram; and Lisa Stone, of SheKnowsMedia and BlogHer, the evening featured an in-depth discussion about the dangers journalists encounter while covering major global events including wars, the misconceptions about the risks of hiring women for precarious situations, the emerging role of technology to make and break news in record time, and the training required to stay safe.

The big highlight of the night was the unveiling of Reporta, an app developed by the IWMF with the help of Facebook and other partners, which will launch this fall. Its aim is to help ensure a customizable level of security for reporters risking their lives to cover emerging developments in hostile environments. The need for such a project was underscored by the discussions from the experts throughout the evening.

THE ROLE OF WOMEN IN THE LINE OF FIRE

Phil Bronstein, known for his leadership at the San Francisco Chronicle, kicked off the panel discussion by lamenting how he was accustomed to having extraordinary women out in the field during his tenure but didn’t think enough about the challenges and dangers they faced in the line of duty.

Success as an investigative journalist requires safety and security training, emotional self-care training, and physical training to protect oneself from mobs and similar hazards. The most important aspect is sexual harassment training. Even though women are empathetic and intuitive, traits that make them extraordinary journalists, there is a basic assumption that they’re also easier to intimidate.

OUT WITH THE OLD DAYS

Re/code’s Kara Swisher had a few things to say about the Internet, as she’s been a fan of it since Al Gore “invented it,” she said (this got the audience laughing). Digital democratizes everything and the idea of mass media doesn’t exist anymore. Mass means everyone. Throughout the course of the night, the panelists agreed that the need for foreign correspondents is dwindling as local communities gain more access to smart phones and other technologies that enable them to break news in real time.

Judy Walgren, director of photography for the San Francisco Chronicle, spoke at length about the demise of newspapers and magazines with deep pockets. Back in the day, when she was living in Africa nine months out of the year, where all expenses were covered, she had a $2 million insurance policy in case something happened. She’s been kidnapped in Somalia and thrown in a Bosnian jail. She was bailed out every time.

Today, editors are relying more on freelancers and locals but under the assumption that they don’t need to be paid well and offered any security or advanced technology. People are making, on average, $40 to $50 covering extremely high-risk stories which effectively creates an ethical issue. Finding and befriending trustworthy sources in the field is key to survival. Several people mentioned Lynsey Addario, acclaimed photographer and author of “It’s What I Do,” as a source of solid advice. The need to develop symbiotic relationships with local people to ensure you’re getting the real story is absolutely critical for journalists traveling abroad.

REPORTA TO THE RESCUE

Safety, security, emotional self-care — keeping journalists happy and healthy is good business for the ever-evolving news cycle. However, with diminishing budgets and a total lack of insurance for most people tasked with breaking major stories in hostile environments, a customizable tool like Reporta, that enables reporters to check-in and notify friends, colleagues, and family that they’re safe and alive, is absolutely necessary.

“I wished I’d had that app.” @judywalgren who was kidnapped in Somalia re: a new security app developed by @IWMF “Reporta” #womenslives

IWMF’s executive director, Elisa Lees-Munoz, talked at length about some of the features the app provides including the ability to create private circles (so those notified of something amiss know exactly what to do), easily access social channels to break major developments immediately (Instagram was mentioned as the preferred medium of journalists to share images), and stay on the radar with geo-location functionality.

As the landscape of journalism continues to evolve, one thing will never change: the importance of keeping those who break news as safe and secure as possible.

Kara Murphy is a writer, photographer, and freelance marketing consultant with over 15 years of experience working with top brands including Rdio, Computer History Museum, Pearson Education, SF MusicTech Summit, and BitTorrent. She is the sponsorship manager at MediaShift. Follow her on Twitter at @karaem.