In Mexico, Reporters Struggle to Cover Unrest Over Missing Students 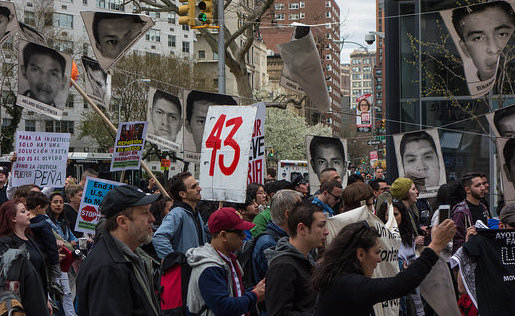 Veteran reporter Sergio Ocampo was having a late dinner on September 26 when his editor called about a shooting in the city of Iguala in Guerrero state. Students from the Ayotzinapa teacher training college were apparently among the victims. But when Ocampo, a correspondent for the newspaper La Jornada, called the then-mayor of Iguala, José Luis Abarca, he was told, “Nothing happened.” The mayor added, “They came from Ayotzinapa to do their destruction here,” Ocampo recalled.

So started coverage of a crime that would rock the region, spark protests across Mexico, and capture international attention.

"Why doesn't the press pay attention to these topics?...Because there's a sort of self-censorship, due to the convenios that the press owners have with those in power." -Sergio Ocampo

Signs and banners for Mexico’s missing students at a #WeAreAllAyotzinapa gathering in New York. Photo by Flickr user A Jones and reused here with Creative Commons license.

Mexico’s attorney general’s office alleged that three students and three bystanders were killed, and 43 students were taken away at gunpoint, according to news reports. It alleged the group was shot at by police, who were working for an organized crime group and acting on the orders of the mayor and his wife. In its account of the attack, which the then attorney-general called the “historic truth,” the office claimed the students were killed and their bodies burned. Families and classmates of the victims dismissed this claim in interviews as an attempt to close the case and said they believe the missing students are alive.

The mayor, who in November was arrested along with his wife, has admitted to ordering police to attack the students, but denies being involved in any killings or their disappearance, according to reports.

Media treatment of the story started out subdued, according to six reporters who covered the Ayotzinapa case and were interviewed by CPJ in Chilpancingo, the Guerrero state capital. They said the slow reaction reflects control over the media, press bias against groups protesting against the disappearance, and self-censorship through the widespread use in the region of convenios — agreements between media outlets and governments.

A pervasive culture of self-censorship

Local outrage was fomented, in part, by international and national reports on the students’ disappearance and the discovery of mass graves, the reporters who spoke with CPJ said. “The foreign press took the lead,” said Margena de la O, a reporter with La Jornada Guerrero and Seminario Trinchera. “People with relatives outside the country would get calls saying, ‘What happened with these students?’ “

They added that the slow reaction in Guerrero, one of the country’s most marginalized states and a hotbed of rebellion and guerrilla movements, also showed stigmas toward Ayotzinapa students and other groups such as teachers’ unions, campesinos (small-scale farmers), and community police.

“Why doesn’t the press pay attention to these topics?,” Ocampo asked during an interview interrupted by riot police filing past the café we were in, on their way to remove striking employees from the courthouse. “Because there’s a sort of self-censorship, due to the convenios that the press owners have with those in power.”

“[Most newspapers] publish the official information: press releases, what functionaries say,” said Zacarías Cervantes, a reporter for the newspaper El Sur, who has covered social movements since 1986. When asked why he thinks other media outlets ignore or cover these groups so superficially, Cervantes, who is based in Chilpancingo, told CPJ, “convenios,” along with, “chayo,” (cash) paid to journalists by politicians.

Convenios, the agreements between news outlets and politicians or government offices, are often a way to make money for the press. These agreements are almost never acknowledged publicly, but can provide politicians with control over parts of the editorial process and the ability to veto stories, and give news outlets access to government advertising.

There are instances when protesters receive prominent coverage, Cervantes said, adding that this happens when a newspaper has not reached a new convenio with the state government, and the owners want to increase the pressure on politicians to sign.

CPJ research shows convenios are common across Latin America, especially in Mexico. In an interview with CPJ, former Guerrero Governor Zeferino Torreblanca confirmed the existence of the arrangements during his 2005-2011 administration. He called the practice “extortion,” on the part of media owners whose publications, he claimed, spoke poorly of politicians not paying them. Their business models, he said, depended on signing convenios even if their reporting was questionable and circulation scant.

Interview requests with the Guerrero state government were not returned.

In an interview in March with several press freedom organizations, including CPJ, Guerrero deputy governor David Cienfuegos, who assumed office last October as part of an interim administration after the Iguala incident, said legislation would be introduced to make state government advertising more transparent. Journalists who spoke to CPJ in Guerrero claimed that the state government tended to advertise with media providing positive coverage, while convenios allowed governors to control content and dictate coverage.

Several journalists said groups — especially Ayotzinapa students and teachers’ unions — have made themselves unpopular with persistent protests which, in the months after the students’ disappearance, included burning buildings and vehicles, storming radio stations and blocking the Mexico City-Acapulco highway. “The majority of people will speak badly of them,” de la O said. Their tough tactics, she explained, reflected an unpleasant reality of poverty and political repression in Guerrero state. “It’s the only recourse that exists in Guerrero if you want to be visible,” she said.

An offering in the town of Ocotepec for the 43 missing students of Ayotzinapa, Mexico. Photo by Flickr user “rainy city” and reused here with Creative Commons license.

Guerrero, often called, “El México Bronco” (the untamed Mexico), includes the glitz of Acapulco and misery of isolated and impoverished indigenous municipalities. Nearly 70 percent of the population lives in poverty, among the worst levels in Mexico, according to federal figures.

It has also been one of the most difficult states to cover for journalists. CPJ has documented a series of killings and attacks on the press there since 2010. At least five journalists and columnists have been murdered since 2010 in Guerrero, though CPJ has not been able to confirm if the killings were directly connected to their work. An editor, Marco Antonio López Ortiz, was kidnapped in Acapulco in 2011, and has yet to be found. The offices of El Sur in Acapulco were attacked by gunmen in 2010. And on May 7, Iguala-based reporter Javier Cano Torres of Radio ABC was kidnapped with three others, according to the state attorney general’s office and news reports. No motive was given for his kidnapping, though his captors have made a ransom request, officials said.

Violence in the state has increased as drug cartels clashed over territory and organized crime started infiltrating parts of local governments in Guerrero — most notoriously in Iguala, where authorities allege the mayor and his wife were paid by the Guerreros Unidos gang, and police were put on its payroll, according to news reports. After the disappearance of the students, the federal government removed police forces in 12 Guerrero municipalities, including Iguala’s, for alleged ties to organized crime.

Deputy Governor Cienfuegos acknowledged in a meeting with press freedom groups that “an adverse situation exists in the state for the press.” He added that some journalists were not identifying themselves properly to the authorities and claimed some shouted anti-government slogans in protests.

Journalists interviewed by CPJ said they take precautions when covering crime in the state, such as sharing information and heading into difficult areas as a group. With protests, they said providing coverage was challenging, but fair reporting was one way to win trust — especially because the groups behind the protests monitor media stories. “Each movement has its own way to go in and cover it,” said Alejandrino González, a photojournalist and Associated Press stringer in Chilpancingo, referring to how the press has to first win the confidence of these groups.

Journalists are often caught between police and protesters during demonstrations. In December, police, protesters and journalists, including González, were injured in a raid when federal police tried to stop a concert promoted by students, teachers and sympathizers, González told me. Guerrero civil protection officials now offer training, along with reflective vests and helmets to journalists so they can be identified easily by police at protests. They have recently started taking DNA samples of press personnel due to rising violence in the state, according to the Guerrero government.

Also in December, 100 members of the Guerrero Journalists’ Club were prevented from leaving a meeting in the municipality of Tlapa by a section of the Guerrero state teachers’ union, the Coordinator of Education Workers of Guerrero State (CETEG) and a coalition of left-wing groups known as the Guerrero Popular Movement, according to news reports. Several of the journalists told media outlets they were roughed up by the protesters. CETEG spokesman José Ángel Barón denied any hostility toward the journalists. “We’ve never attacked the press, nor will we ever,” he told CPJ.

At the Ayotzinapa teacher training school, students expressed frustration with the local media. “It’s just one more enemy,” said Oswaldo Hernández, 28. “They mention that we protest but don’t cover how we’ve suffered.” The comments referred to complaints from students that the government wants to close the school — which teaches a hard-left curriculum to children from rural regions — and has been slowly doing so by choking funds. Outside observers say the school, along with the teaching profession, represents social mobility for many in rural Guerrero and explains the fierce protests against its possible closure.

Seven months after the disappearance of students, protests in favor of them appear to be petering out. Unable to get satisfactory answers from the government, families of the missing students have taken their case abroad, partly to keep up the pressure on the Mexican authorities, de la O said. The CETEG has been protesting over the disappearance of the students. But journalists covering the union say it has split. “The government intervened like it always does with cash,” de la O said, explaining it was a time-tested way of weakening social movements. (The state government did not respond to a CPJ request for comment on this claim.)

David Agren is a Canadian freelance journalist and Mexico correspondent for CPJ. He has covered the country since 2005 and currently writes for USA Today, Catholic News Service, Maclean’s, CTV and the Toronto Star. Follow him on Twitter @el_reportero