To Live is to Ad-Lib: Collab/Space Austin Participants Get Lessons in Improv 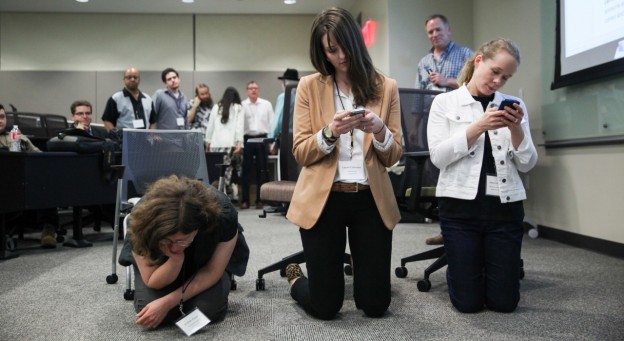 While most conferences are formal in nature, PBS MediaShift’s sixth Collab/Space workshop, which happened last week at the University of Texas at Austin, kick-started with an exercise that got everyone out of their seats–and literally kicking.

“The idea behind that is to get people awake,” said Andy Boyle, who led the session. “It’s a very simple trick to get people energized and actually get their brains switched to think, ‘I’m going to be receptive and listen to stuff.’”

Boyle, a comedian who is also a web developer for NBC Universal’s Breaking News, began with a warm-up called the eight-count shakeout, telling everyone not to worry – they will all look silly. During this exercise, participants appeared as if they were engaged in a sort of cheerleader-style Tae Bo session, where they would punch a fist upward eight times followed by eight roundhouse kicks low to the ground. And repeat.

“When you’re active, more oxygen goes into your bloodstream, which also makes you more engaged,” Boyle said. “It’s like a brain hack to make people actually pay attention when they have to sit through a long day – and it can also help them remember the stuff that they listen too.”

TALK TO THE HEAD

While one may think that professional journalists donning business-casual attire would turn up their noses to light-hearted improv exercises, the Collab/Space participants were not only engaged – but also enjoying themselves.

“I was worried that they would be a stuffy kind of group and it would be hard to get them out of their comfort zones, but I think they really played along well,” said PBS MediaShift Executive Editor Mark Glaser, who organized the conference.

Other participants agreed with Glaser and commented on how much they enjoyed the play before work – so to speak.

“I loved the improv, I think it’s great,” said Laura Lorek, the CEO and founder of Silicon Hills News. “It gets people excited, talking and interacting with each other. It also helps to loosen up the entire room and makes everyone more comfortable.”

One of the exercises that elicited the most laughter was referred to as the celebrity head pass, which is an exercise that can be used as an icebreaker as well as mental stimulant.

“The idea is to help you visualize stuff in order to get the creative, imaginary part of your brain going,” Boyle said. “It gets your brain in not only a creative space, but also a collaborative space, so it makes you both ready to come up with new ideas and bounce off other people’s ideas.”

Collab/Space participants were laughing and cracking jokes as they pretended to pass around the heads of well-known figures, including Bob Dole and Loretta Lynn.

“Did someone drop Madonna?” someone shouted from across the room.

To help re-boost their stamina after the lunch break, Collab/Space participants engaged in another round of improv exercises that focused on team building.

Each team, consisting of eight to 10 people, was given a word and required to come up with a fictional business along with a business model, slogan and a 15-30 second commercial that they had to present at the end of the session. There was just one rule: there is no wrong answer.

“If a group asks, ‘what’s the name of our company,’ and somebody’s like ‘Toilet Co.,’
that’s your name – there’s no debate,” Boyle said. “Whatever anyone says, you take it and you move on. This is all about team building and the idea that no matter what anyone says, it’s correct.”

This notion refers to a basic tenant of improv that Boyle calls “yes – and,” which implies that no matter what another performer says, you have to play along and continue to develop the dialogue.

“It’s about establishing relationships [among ideas],” Boyle said. “And you’re essentially telling the other person, ‘what you’re saying is correct and I’m going to build on top of it’.”

Using this “yes – and” technique not only builds on ideas, but also leads to the creation of unique concepts. Among the ones designed by Collab/Space participants were “Hail Mary” to rate Church sermons based on dullness; “Tindog” to help stray dogs match with homes that already have dogs; and an app to stop others from plagiarizing your work called “Elephant: Because we never forget.”

While improv sessions may seem disconnected from journalism, it’s actually relevant to all forms of communication.

While many related improv exercises are primarily for brainstorming new ideas, Boyle discussed some basic techniques – such as mirroring – that journalists can use to encourage sources to be more engaging. Mirroring, which is also a tactic often used by salespeople, is the idea that if you mimic another person’s behavior (for example, if they talk fast, you begin to talk fast), that person will become more likely to engage with you – and maybe even buy an overpriced T-shirt.

Although improv at a journalism event may seem unusual at first, it fits in with Austin’s unofficial motto, “Keep Austin Weird.”

“These exercises get your brain to make these weird leaps and go to weird places,” Boyle said. “But they will also help you become a more in-depth listener and will actually make stuff stick in your head a little bit better.”

Or at least, invisible celebrity heads.

Melissa Suran is a Ph.D. candidate in the School of Journalism at the University of Texas at Austin. She earned her master’s degree at Northwestern University’s Medill School of Journalism. Suran’s work has appeared in four books and several publications, including the Chicago Sun-Times, Crain’s Chicago Business, EMBO reports, Kaiser Health News and Moment Magazine. She was also featured in Time Out Chicago for her work at WLUW-FM as the host and producer of the Full on Friday show. In addition, Suran has worked with Fox News Chicago, PBS’s Chicago Tonight and Keep Hope Alive on WVON-AM. Follow her on Twitter @lite_writer.