My Kingdom for a Platform: The Opportunities and Threats of Publishing Direct to Facebook 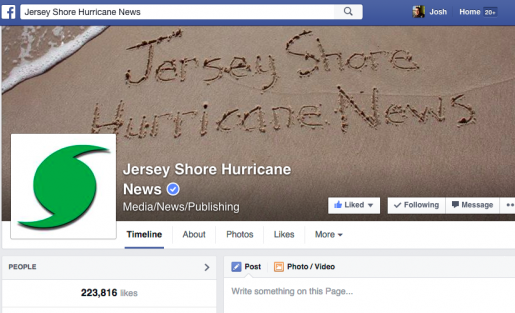 For most of its life, JSHN has existed solely on Facebook.

The New York Times is reporting on Facebook’s pitch to get news organizations to host more content directly on the social network, a scoop first reported by the late David Carr last year.

“In recent months, Facebook has been quietly holding talks with at least half a dozen media companies about hosting their content inside Facebook rather than making users tap a link to go to an external site.” For many news organizations, the Times notes, this would be a “leap of faith.” At the Nieman Journalism Lab, Josh Benton asked the question many publishers are surly mulling over: “Is it worth the tradeoff to get extra Facebook dollars today in exchange for a little of your independence tomorrow?”

“I created Jersey Shore Hurricane News on Facebook because that’s where the community was gathering. That’s our town square."

This is a tradeoff that Justin Auciello understands well. Auciello has been the editor and publisher of Jersey Shore Hurricane News since its launch in the fall of 2011. And for most of its life, JSHN has existed solely on Facebook.

In that time Auciello has built an incredible community around the news on Facebook. With more than 220,000 likes, JSHN boasts more likes than WNYC and ProPublica combined. But for Auciello it is not just a numbers game. Auciello has cultivated an incredible level of engagement on the page (and through Twitter, Instagram and other platforms). On Facebook, Auciello has pioneered what he calls a “two-way community driven news” where participants are all called contributors and he sees his role as much as an editor as a facilitator. One reporter described the site as combining “the crowdsourcing powers of social media with the journalistic screening of an editor.”

A Move That’s Been a Long Time Coming

When asked what he thought of Facebook’s attempt to become a publishing platform for more news organizations, Auciello told me he saw it as “a long time coming.” In general, he thinks it’s a good thing for news to become a more central component of the Facebook experience and he believes that people want more access of news and information on the platform. And while Auciello nods at the immense data Facebook has about its users, his focus is much more on what Facebook could offer publishers in terms of community building.

“I created Jersey Shore Hurricane News on Facebook because that’s where the community was gathering. That’s our town square,” Auciello wrote in an email to me. Although Auciello works alone, publishing on Facebook has meant he’s never really on his own. It’s like having “over 200,000 reporters on the ground — all working together because we’re all community members.” To many, that may sound cliché or like an exaggeration, but I’ve spent the last year working with Auciello as part of the Geraldine R. Dodge Foundation’s journalism sustainability project, and I have been amazed by the generosity and genuine engagement evident on JSHN. Auciello shared a number of stories where communities helped report or even stepped up to cover things when he was unavailable. In an interview with the Christian Science Monitor, Auciello said he was inspired by the way social media leveraged the “power of individual citizens to share knowledge and information.”

For Auciello, Facebook isn’t just a place to publish news; it is a tool to better serve his community. In the aftermath of Hurricane Sandy, Auciello turned to his community to turn his publication into a peer-to-peer network for support and local aid, connecting people who needed supplies, housing and clothing to those who could offer it. TechPresident profiled the way JSHN helped connect people to emergency information during the storm and how “the site was used to crowdsource information about the availability of gas, price gauging, and places to shower or eat.” His work was recognized by the United Way, Red Cross, and even the White House.

In many ways, Auciello has pioneered the kind of distributed reporting that is the hallmark of newer efforts like Reported.ly. In announcing Reported.ly Andy Carvin wrote, “We don’t try to send people away from their favorite online communities just to rack up pageviews. We take pride in being active, engaged members of Twitter, Facebook, reddit — no better than anyone else there. We want to tell stories from around the world, serving these online communities as our primary platforms for reporting — not secondary to some website or app.”

Similarly, Auciello is interested in how publishing directly to Facebook might help build deeper connections between people and publications. “I think hosting content on Facebook will help grow trust with communities in an era where clickbait runs rampant,” he told me. “If news is presented directly in your feed, there’s no need to play any tricks.” In an interview with the Nieman Journalism Lab last year, he also praised the transparency and directness which publishing direct to Facebook offers. “The ability to post something and it ends up in someone’s stream and they can see that without having to do anything — that’s a lot more powerful than just posting a link and saying, ‘Hey, go here,’” he told Nieman Lab.

In a nice coincidence, Josh Benton has a useful deep dive into “distributed content” this week in which he outlines the shift in how social platforms are appealing to publishers:

“It used to be: Spend some time cultivating a following of our network — we’ll send you a ton of traffic.That’s now evolving into: Give up some of your independence and step inside our walls — we promise we’ll make it worth your while.”

Who Owns the Relationship, Who Sets the Rules

And while Auciello has shown how having an open line of communication with your community on Facebook can strengthen news organization’s relationship with readers, Jeff Jarvis warns about who may hold the reins in that relationship. “It’s a damned fine idea to go to the readers rather than make them come to you […] But keep in mind where the real value is: in the relationship, in knowing what people — individuals and communities, not a faceless, anonymous mass — need and want and know so you can give them relevance and value and so they will give you greater usage, engagement, attention, loyalty, and advertising value in return.” While early reports of the Facebook news have emphasized some yet to be determined revenue share, Jarvis is skeptical of any deal that doesn’t also give news organizations the data they need to build lasting relationships with their audience.

The Times itself acknowledges in its report: “Some news organizations have reacted coolly to the proposal.” On Twitter many journalists sounded off on the idea of publishing direct to Facebook, raising concerns about being beholden to Facebook’s algorithm, cutting off access to your content, and the likely minuscule revenue share numbers. The two most repeated phrases were “Faustian bargain” and “short sighted.”

And Auciello understands these concerns. After almost half a decade publishing daily news on Facebook Auciello is building a new stand alone website where he can employ creative engagement and revenue strategies that aren’t possible within Facebook. Until recently, Auciello has made no money from JSHN while Facebook certainly has. Auciello works full time as an urban planner, working on JSHN in his off time. But he has also developed partnerships with WHYY, the Philadelphia public broadcaster, and others which have helped lay the groundwork for his stand-alone site.

“If Facebook had announced and implemented this [revenue sharing] earlier, I may have considered running my ‘site’ strictly on Facebook because, of course, I founded my news organization on there,” he wrote in an email to me. “I don’t know the details of how Facebook will work with publishers, but I think having a standalone site is critical to organize information and provide different services for the user.” In the end, while Facebook offers a lot for publishers and communities, Auciello shares some of the concerns about “walled gardens.” His strategy moving forward will be “a healthy mix of ‘Facebook-first’ content and smart links out” to his new site for features that are best built on the open web.