Mediatwits #154: Podcasts are Hot, Hot, Hot, But Are They Sustainable? 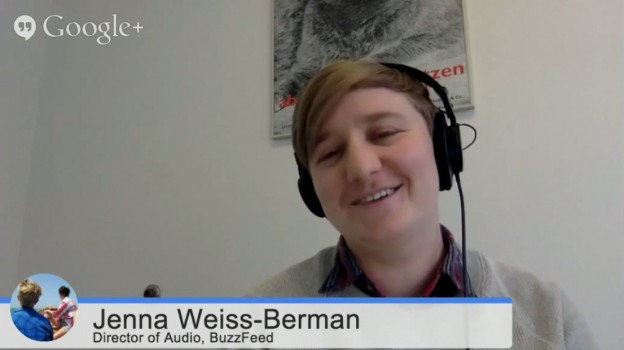 Jenna Weiss-Berman explains how Buzzfeed is approaching its podcasts.

Audio is having a moment right now. And it’s no longer just about public radio. Media companies such as the New York Times and Buzzfeed have their own podcasts, too. While podcasting has been around for more than a decade, it’s already had a first boom, bust and now boom again. Podcast networks such as The Nerdist, Maximum Fun, Panoply and Earwolf have made it easier for listeners to find new shows. This new sense of maturity has gotten the attention of advertisers who are hoping to reach the 27 million Americans that listen to podcasts regularly. Those advertisers are paying top dollar to reach listeners. But the success of Radiotopia’s Kickstarter campaigns suggests that podcasts don’t have to rely on advertisers. Slate’s Panoply network not only includes podcasts from other publishers, but it takes a cut in revenues by offering production, distribution and sales support. On this week’s podcast we’ll dive into the new growth of podcasts with Andy Bowers, executive producer of Slate’s Podcasts; Jenna Weiss-Berman, director of audio at Buzzfeed; Aaron Burcell, former VP of marketing at PodShow/Mevio and current VP of growth and product marketing at Vevo; and Andrew Lih at American University. PBS MediaShift’s Mark Glaser will host and Jefferson Yen will be producing.

"We did this survey with some of our interns here about: What's life going to be like in your thirties? And one of them said 'In your thirties, you listen to podcasts." - Jenna Weiss-Berman on making podcasts accessible to younger audiences.

Andy Bowers is the chief content officer of Panoply, The Slate Group’s podcast network, and the creator and executive producer of Slate Podcasts. Bowers joined Slate after a long career at NPR, during which he served as a White House and presidential campaign correspondent, Moscow Bureau Chief, and London Bureau Chief, and covered the wars in Chechnya and the former Yugoslavia. He is also an experience audio producer, and helped launched numerous radio programs including NPR’s Weekend Edition Sunday. He lives in Los Angeles. Follow him @AndyBowers

Aaron Burcell is the VP of Growth & Product Marketing for Vevo. Before that he was the VP of Marketing and Communications for PodShow, a pioneering podcasting startup, He specializes in growth, focusing on innovations in mobile, social and media. He tweets @Aaron Burcell

Jenna Weiss-Berman currently serves as BuzzFeed’s Director of Audio. She has worked as a producer for various public radio shows, including the Moth and StoryCorps, and she’s created podcasts for publications, companies and foundations.  Find her @WBJenna

It’s hard to talk about podcasting without mentioning Serial. Although the first season has been over for months, it’s currently number 3 on the iTunes podcast chart. It’s success also helped its sponsor, MailChimp, go viral. But making a podcast like Serial isn’t as easy as getting a microphone, a recorder, and some software. And while that’s how many people have done it – Marc Maron used this basic setup to produce some of the best audio, podcast or otherwise, out there – most of the top ten podcast on iTunes are highly produced. You’ll also find that most are already on the radio: Radiolab, TED Radio Hour, Wait Wait Don’t Tell Me, Fresh Air, etc. These are shows with teams of dedicated producers with years of experience. That kind of institutional knowledge isn’t free.

For those hoping to make money podcasting, the magic number is 50,000. That’s how many downloads per episode for a show to be considered sustainable according to Erik Diehn of Midroll Media, parent company of the Earwolf podcast network. Shows with 100,000 downloads an episode can expect to make between $250,000 and $400,000 a year. This is because advertisers are willing to pay more for podcasts, relative to other media. The CPM (cost-per-thousand) rate on YouTube ads are about $15, whereas the standard Midroll podcast makes about $25. But Midroll isn’t the only podcast network with its own advertising arm. Slate’s Panoply network includes podcasts from WBUR, Vulture and New York Magazine and advertisers such as Acura and Netflix. Both Midroll and Panoply are probably hoping to avoid the fate of Mevio, one of the first podcast networks, which was co-founded by the “podfather” Adam Curry, raised millions in venture funding, and shut down last year.