3 Questions That Should Haunt Every Startup 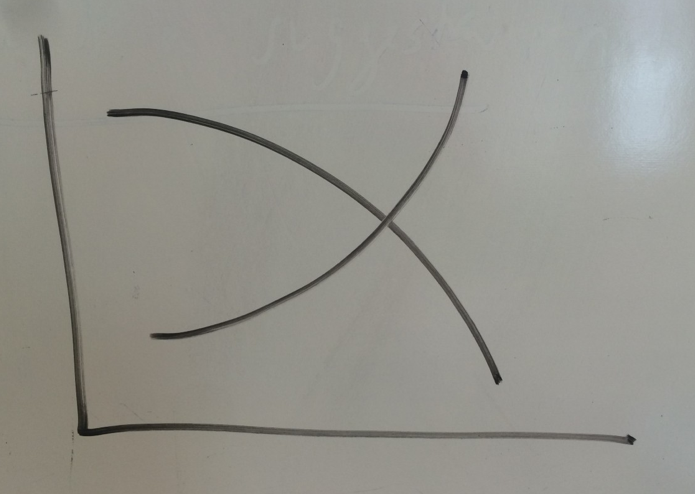 Think of every problem as two lines crossing.

"The old adage 'start with the end in mind' is wrong. Instead, start with first principles and design with change in mind."

“If you’re not creating something that scales, that gets exponentially better with scale, and gets better over time at an accelerating rate, then stop what you are doing.”

And with that, Max Ventilla, the founder and CEO of AltSchool, had the attention of the Matter Four entrepreneurs during our weekly Speaker Series.

“It’s not like everything in life needs to be about scale. I have a tremendous admiration for artists and writers and what they do does not scale,” he clarified. “But in 2015, if you are building products that use computers and the Internet, or you’re trying to raise venture capital, and you’re not creating something that scales, that gets exponentially better with scale, and that gets better over time at an accelerating rate—I think you’ll lose to things that do.”

Let that sink in. And then ask yourself these three questions:

If not, whether you are a startup or an existing institution, your days are numbered. Because someone out there is doing what you do and has answered yes to those three questions.

Does this rattle you? It rattled me at first. I run what one might call a boutique startup accelerator. Intimacy is a key part of our differentiation. But that same approach meant that I couldn’t positively answer all three of those questions—yet.

But don’t fret. Ventilla has some actionable wisdom for all of us on how we can set up our ventures for scalable success by starting with first principles.

“I like the idea of thinking from first principles. I don’t think it’s something that entrepreneurs do enough,” he said. “To avoid an incremental approach to startups, start with first principles.”

So, how does Max Ventilla, who is building AltSchool, which he believes can fundamentally transform our system of education, approach the question of scale in his work? By forcing everything through the lens of whether or not it can scale as early as possible.

“For scale, in our case, what we do is we systematically look at the alternatives — great educational programs that you couldn’t create one hundred of — and we said, ‘Well why can’t you?’,” Max explained. “We go down the list of why the existing alternatives don’t scale as well as the ideal, and then we systematically design something that doesn’t have those aspects.”

Its not only important to think about how it might scale, but also why it might scale now. Why is the world ready for your innovation right now, and what will fuel that innovation?

Luckily, Ventilla believes humanity is at a moment of exponential change and entrepreneurs are positioned to leverage the new fuels that are driving that change.

“I feel incredibly privileged, and the people in this room should feel very privileged, to exist at this time in history and to do the things we do,” he said. “Digital technology is the fuel that will re-write all major industries.”

Max elaborated: “I think that we are at incredible moment in history where you’re seeing something similar to what happened in World War Two where you had this crucible of activity, global war, for a sustained period where millions and millions of people threw themselves at this problem. They created a whole new set of fuels that they then leveraged to literally reinvent the economic canvas.”

“There’s a new set of fuels right now — engineering, the cloud, mobile, large scale data mining, algorithms — and a war didn’t generate them but rather prolonged activity and investment around the Internet over the last couple decades,” he added. “That has brought these new fuels to a point where we can take them and we can do absolutely amazing things with them.”

Does it get exponentially better with scale?

After challenging himself to think through how he can make seemingly unscalable things scalable, Ventilla then forces himself to look at each aspect of his venture to see how he can design a system that gets exponentially better with scale.

“I think you need to be fairly intentional and force yourself to think through that lens,” Ventilla said. For example, you can challenge yourself to look at everything through the lens of network effects, where a product gets more valuable to each person who uses it when more people use it. In other words, a way to make that product get exponentially better with scale. But you have to challenge yourself to see the potential of creating network effects where they’ve never been applied before.

“There may be many things that don’t, on the face of it, seem to have network effects associated with them,” he added. “But if you force yourself to think through that lens of, ‘What would an approach be where if I increase the number of students, facilities, videos, vendors, etc. in our system then the end user experience gets exponentially better?”

“For example, facilities seems like something that doesn’t really have a network effect associated with it. But we forced ourselves to ask the question, ‘Why is the student experience better or cheaper if you have 100 buildings than if you only have 10 buildings?’ Let’s think about how we could make it better and cheaper,” he said. “What if you were part of a school system and you always have the option to go to any new location that opened up? If I go from 10 facilities to 100 facilities, I’m going to decrease the average proximity to every individual family. That’s good.”

Does is get better over time at an accelerating rate?

“The job of the CEO is to maximize the long-term acceleration of the company,” he said. “It’s not about distance traveled. It’s all about sustained acceleration.”

How do you build a company that sustains acceleration? Harness the power of evolution.

“In terms of accelerating improvement over time, the only thing I’ve found that does that is evolution,” Ventilla said. “In situations of complexity and uncertainty, there is nothing more powerful than a Darwinian process, where changes get introduced and you have some mechanism to rate and select for quality.”

To build a company that drives continuous change, you need to “create a different startup DNA,” he said. “You need to be asking yourself: How do I build evolution into the way that I run my company?”

It starts with inverting the org chart. Instead of a top-down organization, build a bottom-up one.

At AltSchool, Ventilla flips the traditional idea of the CEO role on its head. “It’s not me telling people what to do. It’s people telling me what they need from me.” As the CEO, Ventilla said, “if you’re controlling every change you’re going to be a bottleneck on changes.” Evolution doesn’t take a top-down approach and neither should you. “In the world at large, we don’t have bodies that decide when some cultural change or some financial change is allowed or not allowed,” he said. It just happens.

The CEO needs to build an organization that is like an evolutionary operating system that maximizes the quantity and impact of trials, minimizes the costs of failures, and is “savagely user-driven”.

As Ventilla put it, “Process is king.” Not the CEO.

Think of every problem as two lines crossing

One process that Ventilla deeply believes in is the challenge of thinking of every venture as two lines crossing.

“Think of every problem as two lines crossing in the right amount of time,” he said. “Not too quickly or it’s too easy. Not too long or you’ll run out of cash.”

For example, he used the idea of two lines crossing in his previous company, Aardvark, which enabled users to quickly get qualitative answers to questions that Google has such a hard time answering. His two lines were simple but powerful: human and machine.

The process Ventilla and his team used to build Aardvark is by far the best example I have found of building a startup through the Wizard of Oz prototyping technique. Quite simply, it’s an unscalable way of validating a need and a solution by pretending that the solution actually works. Instead of technology making a product or experience work, it’s actually a person behind that computer pretending that the technology really works. This way, you can quickly learn if the need is real and then, if it is, learn what approach works the best to solve that need. When you start building the technology, you know you are building the right thing.

The key here, though, is that Ventilla started with the first principle that the human line and the machine line need to intersect within 12 months. Start unscalable, but always with an eye towards making it scalable.

Design with change in mind

That’s when I knew we weren’t totally off-track at Matter. We may currently be a boutique startup accelerator, but every day we focus on the right things — building an organization with a focus on the culture and processes that continually enable it to adapt to where the world is going, and teaching our entrepreneurs and media partners to do the same. As I’ve said from the beginning, Matter is a prototype and always will be.

As for the issue of scale, I’m grateful for the challenge Ventilla has thrown down. It has haunted me ever since he first asked those three questions. We’re prototyping some experiments, such as our seed investing initiative, to challenge us to build Matter into something that scales, gets exponentially better with scale, and gets better over time at an accelerating rate.

The world moves fast, and change is increasing at an exponential rate. There is no end state. The only constant is change.

“Change is good for us. The more change, the better we will do. AltSchool is a bet on change more than anything else,” Ventilla said. “It’s is a bet on a process that delivers exponential improvement through network effects and through this kind of evolutionary process.”

The old adage, “start with the end in mind” is wrong. Instead, start with first principles and design with change in mind.

Corey Ford (@coreyford) oversees all aspects of Matter. Prior to Matter, Corey built Runway, a pre-team, pre-idea incubator for entrepreneurs at Innovation Endeavors. He also taught design thinking innovation at the Institute of Design at Stanford University, also known as the d.school. Corey began his career in public broadcasting managing the production of 17 films for the PBS/WGBH series FRONTLINE, winning an Emmy and a duPont-Columbia Gold Baton Award. He earned an MBA at Stanford and was a Morehead Scholar at UNC-Chapel Hill.

This post originally appeared on Medium and was inspired by the talk Max Ventilla gave to the Matter Four entrepreneurs on February 24, 2015 as part of the weekly Speaker Series at Matter. It also includes quotes from his previous talk to Matter Three. For more wisdom from its speakers, be sure to follow Matter’s collection, A Matter-Driven Narrative.