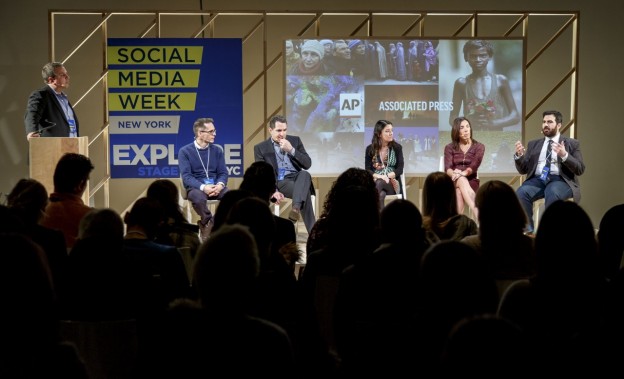 NEW YORK — “We don’t wake up thinking we’ll set the agenda,” said David Reiter, vice president of newsgathering at ABC News. What does set the agenda? These days it’s social media. Rieter offered the caveat that social platforms are one of many story leads for ABC News. It is “an input, not the decision-making process,” he said on a panel at Social Media Week 2015 in New York last week.

Among leading new and traditional media outlets, there was a consensus at the conference that social media is a powerful a reporting tool and distribution platform. It also requires a dedicated production process targeted to varying audiences and formats. In addition to ABC News, the New York Times, BuzzFeed, and AP shared their strategies across the ever-changing social media platforms.

The real-time audience feedback from social media on which stories and topics resonate provides a vast feedback loop for media producers. It was unanimous that the more data, the better; yet it needs to balance the “right mix of analytics and journalism,” said Lou Ferrara, vice president and managing editor of the Associated Press. Tom Namako, News Assignment editor at BuzzFeed News, described social media “as the modern day wire.” For example, Namako’s team first learned of the February 11 shootings of three Muslim college students in Chapel Hill, N.C., on Twitter. They confirmed the incident with phone calls and then sent a journalist to the scene for three days to report. Mining social media feeds for newsgathering isn’t new, but the Chapel Hill example shows its staying power.

When surveying millennials about news habits, David Reiter noted the common response is “I get my news from Facebook or Twitter” — a platform rather than a branded outlet. A September 2014 Pew study found 30 percent of all adults get their news from Facebook, 10 percent from YouTube and 8 percent from Twitter. In turn, outlets are starting to use a platform-specific approach tailored to the key audiences and the format requirements.

Alex MacCallum, assistant managing editor for Audience Development at the New York Times, discussed a platform-specific approach she implemented at the news department as a new position created in August 2014. For example, when they are launching a big story, they may produce a short video trailer for the Facebook native video player and a different approach for Twitter and Pinterest — all of which will be unique to the particular desk. During the terrorist shooting in Paris of the offices of the Charlie Hebdo magazine, they posted Twitter cards with an image and text of what was fact and unknown in order to engage users — not to send them back to the site. When the Ebola outbreak occurred, they produced a photo series solely for Pinterest.

To do this work, MacCallum recruited four “growth and engagement” editors each assigned to a few news desks to help produce social-only content and to train reporters on audience development. The results are impressive. Since MacCallum started six months ago, site traffic increased by 20 percent and Facebook referrals by 150 percent.

With both the new or legacy ways of producing, it’s undeniable that reporters/producers are taking on more duties for their core role as well as for promotions. When I trained PBS web producers to package their content across platforms, I used to say: “multiplatform means more work.” Indeed it is.

The growth and engagement editors that MacCallum recruited are temporary as she stated the goal is “to make the team obsolete” in a few years so that the reporters and editorial staff can take social media on themselves.

These extra duties can make or break organizations depending on how they are configured. MacCallum noted that the workflow for newer outlets, like BuzzFeed and in her previous role as a founding editor of the Huffington Post, include content management systems with time-saving, custom capabilities, such as social media publishing, A/B testing, and an analytics feedback loop. Large media organizations like the Times are using legacy systems that lack a seamless multiplatform publishing processes.

In my own experience at four public media outlets, even with a new CMS, they simply did not have the developer resources for feature requests to streamline steps in the admin tool. This was despite numerous requests and documenting a concrete cost-benefit analysis.

With the actual storytelling, Jonathan Perelman, vice president of BuzzFeed Motion Pictures, explained highly streamlined video production process. Neither he nor his senior counterpart greenlight their videos. The producers, “pitch sideways; they pitch to their friends,” he said. The producers write, shoot, edit, and act in their own videos and have convertible sets available to test their concepts. Most producers are informally trained. As a result, they publish 35 to 50 videos per week with a running time of 90 seconds to 3 minutes, and each producer is expected to churn out 1.5 videos per week. BuzzFeed does not have a native video player. They go straight to YouTube and more recently, Facebook.

It’s a matter of time if media organizations can streamline to a BuzzFeed production model and attract enough eyeballs and dollars. Perelman observed that BuzzFeed site traffic consistently rises with increasing audiences on their social platforms. “It floats all boats,” he said. Yes, the New York Times saw a significant increase while adding new social media staff; will this plateau? Financial pressures persist in the media industry — one self-described millennial in the audience at Social Media Week commented that she was laid off from three media jobs. She said, “I didn’t leave journalism; journalism left me.” Will the distributed form of producing to niche audiences on social media pay off or burn it out?

Jess Duda is a digital media producer and strategist most recently consulting for BillMoyers.com, Blue State Digital, and PBS Digital. She also held policy and editorial positions at the Council on Foreign Relations, IHS Jane’s 360, U.S. Institute of Peace, and the Center for Media and Social Impact.