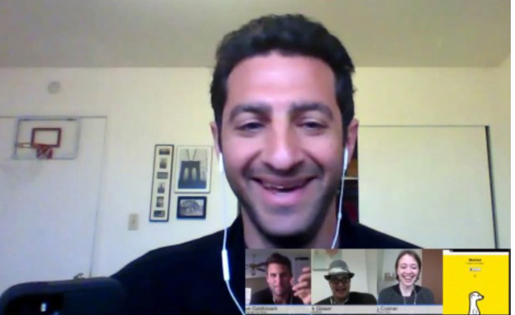 CNBC's Ari Levy live-streams The Mediatwits on Meerkat while discussing how Meerkat broke out at SXSW. Meta.

If you’ve ever been to Austin, Texas, then you know they like to keep things weird. And things have certainly been weird at this year’s SXSW. Marketers have turned to Tinder robots, protests against robots, and feline “tech correspondents” to try to make an impression at the ever-growing festival. Over the years, the importance of SXSW Interactive as a proving ground for new tech has waned; so much so that some have argued it’s no longer accurate to call it such. That’s not to say there weren’t important discussions happening at SXSW. Google chairman Eric Schmidt was called out for repeatedly interrupting fellow panelist Megan Smith, the CTO of the United States, during a panel on diversity in the tech industry. But you didn’t have to worry about missing out if you decided to skip the festival this year. Not only has there been a ton of coverage but you could also hop onto Meerkat and watch live streams from the conference. The live-streaming app was arguably the biggest tech story to come out of Austin with celebrity adopters such as Jimmy Fallon and Julia Louis-Dreyfus. We will dig into the best of SXSW with Meg Cramer, producer at Marketplace; Ari Levy, senior tech reporter at CNBC; Steve Goldbloom, host of PBS Everything But The News; and Andrew Lih at American University. PBS MediaShift’s Mark Glaser will host and Jefferson Yen will be producing.

"Everyone who is on Meerkat, right now, is talking about how they're "Meerkating" now on Meerkat. It's yet to get to the point where you can do a Meerkat and talk about anything else." - Ari Levy

Meg Cramer is a producer for Marketplace Tech. Before joining Marketplace, she covered the Midwest economy for Michigan Radio’s Changing Gears. She has also worked with APM’s Public Insight Network, training newsrooms to use PIN and other digital tools. On Twitter, she’s @Meg_Cramer.

Ari Levy is CNBC’s senior technology reporter in San Francisco. Prior to CNBC, he spent 11 years at Bloomberg News, starting with financial coverage in New York, before moving to the Bay Area, where he wrote about venture capital, deals and dealmakers, technology start-ups and innovation. He also edited stories across the technology landscape and contributed to Bloomberg Businessweek and Bloomberg Markets. He tweets @levynews.

Steve Goldbloom is a writer, producer, and performer best known for creating and starring in the PBS Digital Studios comedy series Everything But the News (2014). He also contributes to the PBS NewsHour broadcast as a special on-air correspondent. Follow him @stevegoldbloom.

Whether you like it or not, brands play a big role at SXSW. Giant corporations and small startups come go to Austin for the same thing: attention. Of course, not everyone thinks the festival matters anymore. But that’s not stopping McDonalds, Verizon, Samsung, among others, from setting up shop in Austin, in the hopes of garnering media coverage. Going into SXSW, McDonalds was in hot water for not paying musicians in their showcase. They quickly changed their tune. GE was also able to garner some attention with its “BBQ Research Center.” Not to be outdone by rival cat food company 9Lives, Friskies brought Grumpy Cat to promote its new line of bacon cat food.

What we now know as SXSW Interactive started in 1994 as part of the film arm of the festival, which has roots before that as a music festival. In the 21 years since its inception, the tech conference has helped startups such as Twitter, Airbnb and Foursquare break out. Now you can add Meerkat to that list. According to Mashable, the app’s user base grew by 30 percent after Twitter cracked down on the new app’s ability to piggyback off its social graph service. Twitter’s decision came after it bought a live-streaming app of its own called Periscope. Periscope is still under closed beta for now but one has to wonder if Meerkat has enough of a lead to fend off Twitter. One could argue that Meerkat is merely the convergence of an old Internet trend, live-streaming video, with new mobile technology. Apps such as Twitter, Snapchat and Vine have made it easier for the average person to post video to social streams, but this takes it to another level with live-streaming video. You just need to look at social media celebrities such as Jenna Marbles and Grace Helbig to understand the potential payoff for creators in the social space.

Did you attend SXSW? Is it still relevant when talking about tech? Have you used Meerkat? Do you think it’s the next big app?