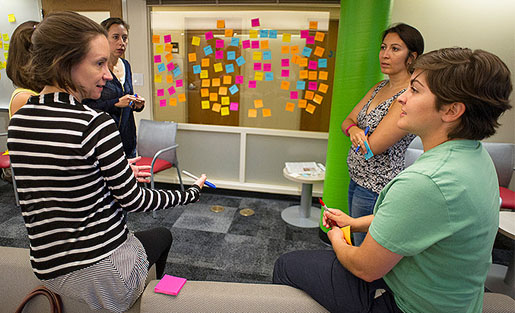 They last too long. There’s a lot of talking and not a lot of doing. They’re often dominated by the loud naysayers in the room.

So when I heard a piece on NPR about how bad meetings are taking up more of our workdays, I felt validated. I did the modern-day equivalent of yelling “AMEN!”: I tweeted the story. And when fellow journalists retweeted it, I learned that I’m not the only one in our field who feels this way.

“As a leader, if your meetings aren’t getting you the behaviors you want or the energy you want, change something." -Perry Klebahn

In newsrooms, meetings are essential. We need them to communicate with one another, coordinate coverage and meet deadlines. We can’t get rid of them, but we can make them better. I interviewed six teachers from Stanford’s Hasso Plattner Institute of Design (d.school), including two former journalists from The Washington Post, about how to make our newsroom meetings more creative, effective and action-oriented. I had read about energizing the group and encouraging shorter gatherings with standing meetings. I’ve also read about the importance of creative meeting spaces. Here are their other tips that I didn’t expect.

1. Start with a decision

“When a meeting starts, ask everyone in the room how long they think the meeting should take,” said Emi Kolawole, the former editor of the Innovations section at The Washington Post and editor-in-residence at the d.school. You can also decide as a group if it should be a fast-paced, high-energy meeting, suggests Perry Klebahn, the former CEO of the messenger bag company Timbuk2 and director of executive education at the d.school. The leader should hold everyone accountable to that group decision. “And it’s equal,” Klebahn said. “I’m not singling you out if you talk too much.”

“Let’s make something together instead of just sharing information,” challenged Justin Ferrell, a former director of digital, mobile and new product design at The Washington Post and the current director of the d.school fellows program. Ferrell acknowledges that journalists need daily budget or planning meetings, but that newsrooms should also have meetings of multidisciplinary teams (a designer, videographer, reporter, editor, photographer, for example) where they create together. Instead of reporters or editors inviting others in the newsroom once a project is underway, include those colleagues from the beginning. One suggestion: Have everyone at the meeting create a prototype together by the end of it. The prototype could be a sketch of the elements in a multimedia package or the structure of a multipart series.

Participants should bring a question to the meeting to ask to their team, tapping everyone’s brain power to address a problem they are grappling with, suggested Kathryn Segovia, a d. school lecturer. “A lot of times [a meeting] turns into one person talking in a monologue and passing it off,” said Segovia. Instead, “meetings should be utilizing everyone else’s time. It’s an expensive hour.”

This is the most controversial suggestion, admitted Bob Sutton, a Stanford engineering professor, d.school lecturer and co-author of “Scaling Up Excellence.” “There are just some people who are incredibly destructive in group meetings,” he said. People who are “really great at ripping things apart” may use those skills to be great editors and reporters, but in the early stages of a creative process, “there is a warm fuzzy stage where you don’t want this person around.” This person is really important later in the process, he added, before your work reaches your audience. Know the right time to use their strengths to help the team.

Sutton believes the most productive meetings are with small groups. “Once you get above six or seven people, things start falling apart,” according to research he cites.

“Bring something into the meeting to provoke discussion” — a competitor’s work, for example ­– “for people to react to so you aren’t talking about abstract things,” said Jeremy Utley, director of executive education at the d.school.

“When there is a negativity, it’s often because we’ve forgotten why we’re doing this,” said Utley. He suggests an activity: “In a brainstorm, ask for peoples’ ideas. Now have everyone find the worst idea. Then say, now how can we take this idea and make it awesome? Take that negative energy and force it to be positive.” I tried this at a recent meeting with a San Francisco arts organization for a class project and it worked brilliantly.

8. Bring in an outsider

Invite experts from outside your organization, someone in your audience, a colleague who would see the problem from a different angle, or “a personality which is lacking,” advised Utley. If you notice that your group dynamic needs a certain kind of energy, invite someone with that trait to the meeting. An outsider in the room can force the team to articulate its assumptions and challenge them. “There are great efficiencies gained by having shared context and language. But then the downside is you get insulated and you get fixed in your way of thinking,” said Utley.

If you want to encourage a debate and unrestrained creative output, sometimes the boss should not come to the meeting or know when to leave. “Even if you are the nicest, warmest, most likable leader, know what meetings not to go to,” said Sutton. “The status difference means that people are afraid to say things.”

Bob Sutton suggests learning from the former Netflix executive Patty McCord. She told him in an interview: “The most important role I played at Netflix was, at the end of every executive meeting, to say ‘Have we made any decisions in the room today, and [if we have] how are we going to communicate them?’ ” Sutton said that the first time McCord asked this, people argued about what decisions had been made in the meeting. Sutton believes that ending a meeting with clarity about decisions can cause a ripple effect, improving communication throughout an organization.

“Too often the feedback is about the work and not about the meeting,” said Klebahn. Ask the team: Are we meeting in the right space? Is it fast enough? Does the time work? Is it valuable? Then, keep experimenting. Don’t accept that regular meeting you’ve always had as the way it should be. Even try skipping a regular meeting and see if you can go without it. “As a leader, if your meetings aren’t getting you the behaviors you want or the energy you want, change something,” said Klebahn.

Are you tired of bad meetings? Share your ideas and feedback about these tips with other innovation-minded journalists by tweeting #jskmakesmeetingsbetter. Together, let’s transform newsroom meetings from distractions to productive work sessions.

Zena Barakat (@zena_b) is exploring how to make watching videos on mobile a more delightful and engaging experience. She has spent most of her fellowship time at Stanford’s Hasso Plattner Institute of Design, commonly called the d.school, learning how to put users’ needs at the center of any project. She has also studied how to transform organizational cultures to inspire more innovation and risk-taking. A professor of hers once declared, “dignity is the enemy of creativity.” She agrees, and it is now her mantra.