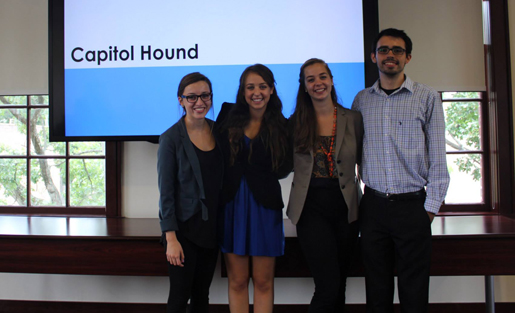 This is college. And in college, we apply for summer internships. That’s the whole point: getting prestigious, or at least recognizable, internships that will hopefully lead to jobs upon graduation.

A common method students use to rank themselves is by the reputation of the experience they gain. Whether you intern at Google, a Harvard research institute or a big-name news corporation can draw the line between the absurdly smart kids on campus and the others who may or may begin to notice a debilitating cloud of insufficiency ever-drizzling on their heads.

For me, however, this isn’t just college. It’s also Capitol Hound and Reese News Lab, the media startup hub that birthed Capitol Hound during the summer of 2013. And although it has taken me awhile to notice it, the Lab and the growing startup are preparing me for a path to major career growth in ways that are difficult to put a name to just yet.

But what’s in a name?

A bit more identifiable than my career growth is the growth of Capitol Hound. We are a developing startup that produces searchable audio and transcripts of the North Carolina General Assembly sessions. We also send keyword-based email alerts to subscribers with particular interests among the state’s legislative sessions. We’re growing so much, that a few weeks ago, it was announced that John Clark, the executive director of the Lab, and Sara Peach, the associate director of the Lab, were able to secure the C. Felix Harvey Award. The award allows Capitol Hound to offer its services for free to most news outlets in North Carolina.

Since we base our entire business on audio recordings that we produce in-house, reliability on our source of audio is very important. So, if the website we record all the state legislative sessions from suddenly went missing, you could imagine just how quickly our faces would run pale, hearts sink and stomachs do who-knows-what. Well this week, the website did disappear – when the state reportedly didn’t renew the domain name – and I did panic.

John and I rummaged the Internet for traces, and after a few minutes of searching, we eventually found what we were looking for. The “new” website looked exactly the same: The logo was identical, documents could be found under the same tabs, and the multiple search bars were in the same corner of the screen. Sure, the audio files still linked back to the deactivated hyperlinks of yesterday (which meant they were faulty, giving us another panic attack with hardly enough recovery time after the first), but the website was generally the same. Overall, what had changed was the site’s domain name.

Does it really have so much power to define something? Does affiliation with an Ivy League make you smarter or guarantee a successful career? Can a name dictate Capitol Hound’s success in getting our product out to customers? This week, the Capitol Hound team sided with the Bard of Avon. Names do not always determine fate. At least, not in the ways we expect.

In response to the highly competitive nature of college and the startup world, maybe we would all do well to read more Shakespeare.

Justina Vasquez is a sophomore journalism major from Fayetteville, N.C. who hopes to attend either law school or business school in the future. This is her first year with Reese News Lab. Her interests include the promotion of STEM education among underrepresented populations, jazz music, great food, and a weird tingly feeling she gets in her mind when she’s solving a cool problem. You can follow her on Twitter at @helloimjustina.