The Generosity of David Carr 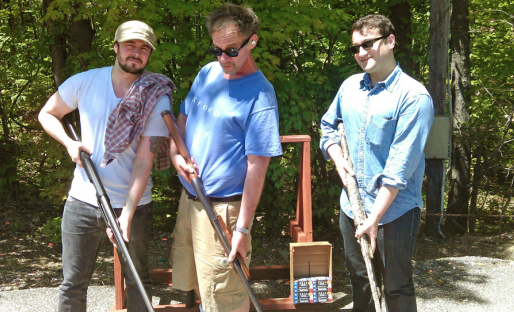 The Unforgiven, with David and Foster Kamer. Photo courtesy of Anthony De Rosa.

This remembrance of David Carr first appeared on Medium and is reprinted with permission.

The impression David left on people is indelible. If you met him once, or if you knew him for years, he was someone you could not forget.

"He knew how to get you to be sincere and at your least self-aware. He was unguarded which led you to be unguarded."

The voice, the sly smile, his corny jokes. David was incredibly kind and generous. He was also, as Alexis Madrigal said: “a bad motherfucker.”

I had admired David from afar for years, and I was not yet a professional journalist. I was someone who was writing for my enjoyment and by some stroke of luck found myself working at a company with a newsroom. One day in early 2011, I wrote something that caught David’s eye. He invited me to meet him for drinks (he had Diet Cokes) at Blue Room, a bar not far from our offices near the dreaded Times Square. I was lucky enough to meet his wife Jill that night for the first time as well.

He picked up what I posted and wrote a column around it. This caught the eye of folks on the other side of my office, and the rest led me to the career I have today. I owe the fact that I now get to do what I love in large part to David for taking the time to talk to me. This is true for so many other people as well.

David and I became friends over the years and I also have had the pleasure of getting to know his wife Jill, who David has admitted many times is far more impressive than he. He loved being a dad, and has raised three equally extraordinary daughters: Erin, Meagan and Maddie. He recently told me how odd it felt to have an empty nest, having just sent his youngest off to college. He was (it still doesn’t seem possible to refer to him in the past tense) an extremely lucky guy who balanced a very high profile job with #thissuburbanlife, as he would often tweet.

I would steal him away from the Times occasionally, but not nearly enough in retrospect, for lunch to talk shop. Media decoding would take place but mostly we spoke about life, marriage, fatherhood, and often cooking, like how he learned to bake his own bread (from Clay Shirky of all people.)

He graciously hosted me at his cabin in the Adirondacks and one of my favorite memories of him was sitting around the campfire, staring up at the stars, and listening to music. We even managed to hit a drive-in movie, which ran a oddly paired double feature of Ted and Brave.

At the drive-in, with David and James Del.

We somehow convinced him once to go skeet shooting, which BuzzFeed somehow turned into a trend piece on how “gun culture won over east-coast liberals.”

Truth be told, we just thought it would be fun, and David was always up for an adventure.

A common refrain you’ll hear in the stories people will tell about David is that he made you feel comfortable. Sure, he was intimidating at first and intense. He could turn a phrase that often took a second to decipher. But once you settled in, you were under his spell. He knew how to get you to be sincere and at your least self-aware. He was unguarded which led you to be unguarded. This was also a key to why he was such a great reporter, along with the masterful way he could string words together.

I was watching him interview Edward Snowden, Glenn Greenwald and Laura Poitras just before I learned he had passed. As I watched the event, I could hear David coughing and I was concerned for his health. When we last spoke on the phone he simply said he was dealing with a really bad cold.

I had meant to tell him how much I enjoyed watching the event, I would have had one more chance to speak to him but I never made that phone call in time.

I can’t imagine a world without David in it and I really don’t want to.

All I can do is try to feel some comfort in the fact that the wisdom, kindness and generosity he gave will be paid forward by those who received it. I can hope that someday, beyond this world, I’ll be with my friend again.

But for now, goodbye David, and thank you.

Anthony is the editor-in-chief of mobile news start-up Circa. Anthony was formerly the Reuters Social Media Editor, integrating the “ambient wire” that exists on social networks, where news now breaks before anywhere else, into Reuters platforms. In addition to serving as Social Media Editor at Reuters, he hosted “Tech Tonic” and was a Reuters columnist.