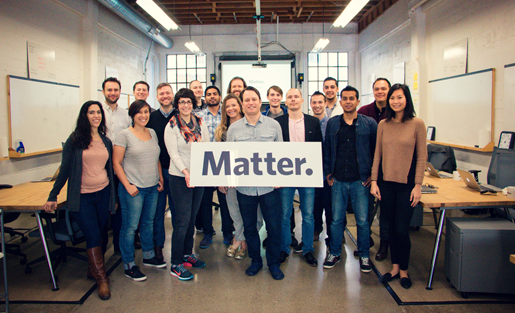 Matter, a media startup accelerator launched two years ago by the Knight Foundation, KQED and PRX, has named six tech companies that will participate in its newest class aimed at “changing media for good.” The entrepreneurs will take part in a five-month program that includes a $50,000 investment, mentoring, design reviews, and an intensive boot camp that culminates in a demo day.

The news follows Matter’s announcement last week that it’s partnering with four more media organizations, including The Associated Press, The McClatchy Company, A.H. Belo Corporation, and Community Newspaper Holdings. The new media partners will travel to Matter to participate in monthly design reviews and a weeklong design-thinking boot camp to experience the entrepreneurs’ journey. “Not only does this build deeper empathy between our media partners and our entrepreneurs, but it also sets up the media partners to bring the Matter process and culture into their own organization,” Corey Ford, Matter’s CEO, explained in the announcement.

Here’s what we know about Matter’s new class of media entrepreneurs:

Curious Nation (@Curious_Nation), created by Jennifer Brandel, Corey Haines, and Sam Withrow, gets its roots from Curious City, a news experiment at WBEZ Chicago that lets the audience vote and participate in the editorial process. Brandel was also involved with AIR’s Localore initiative, which you’ve read about here on Idea Lab.

Curious Nation is an audience-driven journalism platform that helps storytellers partner with the public to create more relevant and sharable stories about their communities. As Brandel explains in a Medium post, Curious Nation believes “everyone has interesting questions (aka story ideas) worth investigating, no matter their age, race, class, gender, profession or any other means of division.”

Eureka King (@EKplugin), started up as a recommendation app, but its creators, Dmitri Tcherbadji, Ishtiaq Rahman, Arjun Mohan, and Blake Conway, soon found that it made more sense to focus on content publishers.

Eureka King enables publishers to engage and monetize their audience by adding an e-commerce layer to their website that delivers contextually aware product suggestions available at the click of a button. “We want to help independent publishers drive innovation by showing their users products they care about,” Mohan told Matter.

Ben Yee and Niles Lichtenstein of The History Project.

The History Project (THP) (@thehistoryproj), built by Niles Lichtenstein, Ben Yee, and Gareth Londt, empowers you to build your own time capsule to reconnect with the media and moments that matter. The project was started when Lichtenstein’s father died, and he realized that his father’s story was scattered across a set of clickable files in the cloud. So he was inspired to “reinvent the modern time capsule” in an effort to capture a meaningful storytelling experience.

“With all the technology and tools available there had to be a better way to take the set of fragmented physical and digital assets scattered across our lives and unify them in a meaningful narrative,” Lichtenstein told Matter. “We need to ensure our greatest human resource, our history, won’t be lost.”

The duo started by building Syria Deeply, then moved on to Ebola Deeply, and finally arrived at News Deeply. “As soon as we chose to go deep on one vertical, the community formed around it,” Setrakian told Matter. “We were identifying an underserved audience and building a dedicated platform around it.”

NextRequest (@nextrequest), started by Tamara Manik-Perlman, Reed Duecy-Gibbs, and Andy Hull, is based on the premise that if you want to make public records requests easier for both the public and the government, the best place to start is with civil servants — since civil servants have the most power to change their systems. “Tools that make it easy for the public to make inquiries exist,” Manik-Perlman told Matter. “But there are few tools that focus on civil servants and public sector staff as the user to design for.”

NextRequest streamlines the public records request process that is so frustrating for governments, journalists, and the public by creating a user-friendly digital portal that makes it easy for civil servants to respond to constituents.

Before Stephie Knopel started PersonalHeroes (@Personal_Heroes), she was a “cool hunter,” someone who uncovers cultural trends and innovations before they happen. This led her to the realization that a new trend among younger generations is the value of doing good — yet it’s currently difficult to measure the impact of kindness by people and organizations. “Tech has reached a point where we can measure almost everything,” she told Matter. “But we can’t measure positive impact yet.”

PersonalHeroes allows people and organizations to measure their positive impact in the world via a mobile platform that leverages collective intelligence to rate acts of kindness, creating a new layer of reputation based on GOOD.

We’ll be following the progress of some of these startups here on Idea Lab, so check back in for more details.